“The ball was generally of solid rubber or cork, with a lead bullet in the center, and wound about with woolen yarn and covered with some kind of leather, usually a piece of buckskin,” he said. “The bat was usually a piece of pine fencing with a handle and of two or three foot length.

“Some citizens had been east during the spring of the year (Cook didn’t specify which year), and had seen the start of the new game and brought a brief knowledge of it to the town and, if I am not mistaken, brought home a ball and bat for the children. The ground was marked off for the bases and the top of an old ‘wash boiler’ used as one of them.”

By 1866 Springfield had organized “base ball” clubs including the “Mystics, Star, Capital, Olympic, National, and Eagles” and matches were announced in the Illinois State Register. By 1869, a club for African-Americans called the Dexter Base Ball Club was playing, too.

“The usual trophy for match games was the award to the winning club of a rosewood or mahogany ball bat, mounted with silver handsomely engraved and the wood highly polished,” said Cook. “In the early stages of baseball there were no gloves worn, no spiked shoes, though each club was uniformed in bright colors, mostly red and blue. There were no regular dimensions for bats, but almost everyone owned his own and had it ‘turned’ at the mill to suit his fancy.

“The society people turned out in force,” Cook said, “and the DuBois orchard (a makeshift ball field on the current site of Sacred Heart-Griffin High School) was well filled with buggies and carriages, occupied by the fair damsels of Springfield …”

In 1875 three men in Springfield organized a women’s baseball club, according to Debra A. Shattuck in Total Baseball: The Official Encyclopedia of Major League Baseball. “They were confident that the novelty of women playing baseball would attract large crowds and fatten their bankroll.”

The first game on Sept. 11 was between the Blondes and the Brunettes on a North Seventh Street field modified to “a trifle over half that of an ordinary field,” according to the Sept. 11 and Sept. 13, 1875, Illinois State Journal. The match included “no immodest act,” the paper reported, but it apparently did include some bad baseball: the Blondes won, 42-35, but only three of the Blondes’ runs were earned, and the two teams combined to commit 24 fielding errors.

Springfield’s first semi-professional team was the Liberties. Organized in 1876, it played at Seventh Street and Enos Avenue, a story in the June 28, 1936, Illinois State Register reported. Organized in 1876, the Liberties played locals and clubs from the newly formed National League. The team moved to Peoria the next year, but returned to Springfield in 1878 and became known as the Watch Factory team, since many players worked at the Illinois Watch Co.

“In those days the pitching distance was 45 feet …,” the Register reported. “The batsman was permitted to call for a high or low pitch and the unpadded catcher’s glove and mask had just been introduced.”

In 1893 “with a new park erected at Tenth Street and Enos Avenue, Springfield got ambitious and joined the Northwestern League,” said the 1936 Register. The Northwestern was a short-lived minor league of Midwestern teams, according to www.baseball-reference.com. Springfield was in it for one year.

After that, the city’s semi-pro team ruled for several years.

“Baseball was a sport in those days, to its members as well as the public in general,” the March 30, 1930 Illinois State Journal reported. “As a result, ball players were a carefree, roistering, playful lot who played because they loved the game. They accepted their wages — when they could get them — spent them and forgot them. It was nothing unusual for an athlete to be paid after one game and broke before the next.”

In 1889, Springfield again joined the Central Interstate League, according to the 1936 Register. The Springfield Senators, managed by Buck Ridgely, won the league pennant in 1889.

“Upon its return (from winning), the fans of the town hired a band and met the athletes at the Wabash station,” said the 1926 Journal. The league lasted two seasons.

At the time, the ball park was on land owned by the Capitol Coal Company at Nineteenth or Twentieth Streets (accounts vary) and Washington Street, “along the Baltimore & Ohio tracks,” according to the 1930 Journal and the May 2, 1926, Journal. The grandstand was “little more than a shed.”

After the Springfield Senators, Springfield had only amateur baseball until 1894, when semi-pro ball returned. 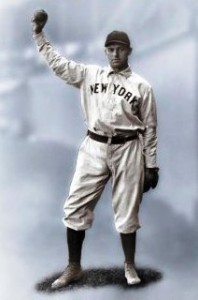 In Springfield, he “operated a saloon and built a reputation as a tough character, serving as his own bouncer when the need arose,” reported the Baseball Biography Project. “He also pitched at the semipro level for the next three years, and it was then that he discovered Old Sal, the pitch that changed his career,”

McGinnity’s introduction to major league baseball was in Springfield in an exhibition game with the Baltimore Orioles, according to the 1929 Journal article, which didn’t specify the year of the game. McGinnity joined the Orioles in 1899 and later played for the New York Giants.

“McGinnity may have been the most durable hurler in the history of the sport, often pitching both games of a doubleheader” Don Doxsie wrote in Iron Man McGinnity: A Baseball Biography. “He averaged more wins per season in his 10-year major league career than any pitcher in history, and continued to pitch for two more decades in the minor leagues before retiring at 54.” McGinnity was inducted into the Baseball Hall of Fame in 1946.

This entry was posted in Prominent figures, Sports and recreation and tagged baseball, Iron Man McGinnity. Bookmark the permalink.