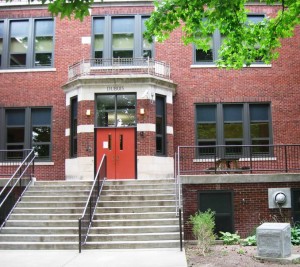 At the start of the Civil War, the Sangamon County Fairgrounds on the western outskirts of Springfield was hastily converted into a mustering and training camp for new recruits and militias from around the state. Called Camp Yates, after Illinois’ Civil War governor Richard Yates, the camp was bounded by today’s Washington and Governor streets and Lincoln and Douglas avenues. Illinois’ 7th, 8th, 9th, 10th, 11th, 12th, and 21st regiments were formed at the camp.

It was at Camp Yates on June 16, 1861, that Ulysses S. Grant first took command of Union troops. Grant had accepted the colonelcy of the 21st Regiment, and his first duty was to instill discipline into the unit. Grant made his headquarters in a bungalow that sat where Dubois School today. (The bungalow eventually was moved to 119 S. Walnut St.)

Camp Yates’ days as a military facility were short. Neighbors complained that soldiers from the camp destroyed their fences, stole chickens and fruit from their yards, and wandered the streets drunk. The camp also was inconveniently far from the railroad lines needed to move troops in and out of the city.

Within months, authorities decided to replace Camp Yates as the primary center of concentration and training for Union recruits in Illinois. Camp Butler was built northeast of the city near Clear Lake, “in an area,” in the words of one history, “much more conducive to the training of large bodies of men and to the maintenance of public order.”

A marker on the grounds of Dubois Elementary School, 120 S. Lincoln Ave., which occupies part of the site, now commemorates Camp Yates. The Dubois marker was installed in 1952, replacing one erected in 1909. The last remnant of that marker, an obelisk, now is in a residential back yard near Douglas Avenue and Governor Street.