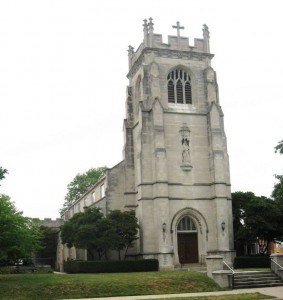 What became today’s Cathedral Church of St. Paul in Springfield began as “a handful of Episcopalians” and occasional services held by a Jacksonville pastor in 1832. The Parish of St. Paul’s was formally organized, with 19 parishioners, on June 19, 1835. The Rev. Deacon Samuel Chase was the first local minister.

The first St. Paul’s church, built in 1838, was on Washington Street between Third and Fourth streets. The growing congregation moved to Fourth and Adams streets in 1846 and remained there for nearly seven decades. The current cathedral at Second Street and Lawrence Avenue was consecrated in 1913.

This entry was posted in Churches, Lincoln, Abraham and tagged Rev. Charles Dresser. Bookmark the permalink.