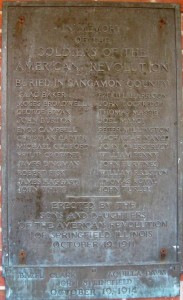 This entry has been updated.

A marker on the Old Capitol Plaza identifies 27 veterans of the American Revolution who are buried in Sangamon County, but that figure probably identifies only half of the patriots whose final resting places are in county cemeteries.

Karl Reed, in a 2010 study done for the Springfield Chapter Sons of the American Revolution, reported that “best estimates conclude that between 52-54 patriots are buried in Sangamon County.”

Reed noted that his report leaned heavily on work done previously by Jacqueline and Harold Wright.

… I discovered they had already spent nearly 25 years collecting the very information I was looking to include. The Wrights had visited all of the patriot graves in Sangamon County they could find and had taken pictures of the tombstones and grave markers. In addition they had attended many grave dedications over the years and again taken pictures and saved programs. Jackie had also researched the State Journal-Register newspaper (and its predecessor) files and copied articles about long-ago grave dedications. Jackie had also spent countless hours researching history books about Sangamon County and included that information. The Wrights had collected three 4-inch binders of material relating to patriots buried in Sangamon County and graciously allowed me to include their information. In addition, Jackie Wright had spent years serving on the Sangamon County Historical Sites Commission. This project could not have been completed without the Wrights’ knowledge, research, and dedication.

Incomplete and/or conflicting records were a steep hurdle for Reed, the Wrights and other researchers. One of the great values of Reed’s study is that it  reconciles such problems where it can and, when it can’t, spells out where gaps remain.

Reed identified a total of 54 possible Revolutionary War veterans. (see list below). However, one of those listed, Absalom Baker, moved from Sangamon County to Madison County, where, Reed wrote, he probably is buried . Several others were buried in Sangamon County prior to 1839, when the county was reduced in size, creating, among others, Logan and Menard counties. As a result, the graves of a half-dozen patriots originally buried in what was Sangamon County now lie in Menard and Logan counties. Those names remain on Reed’s list.

The study includes service details and locations of the graves, where available, as well as Reed’s sources and where readers can learn more about each veteran.

More information: Revolutionary War Veterans Buried in Sangamon County formerly was available online, but the old link no longer connects. Anyone interested in more information can consult a hard copy available in the Sangamon Valley Collection at Lincoln Library.