In March 1914, a couple of social survey experts attended a so-called “athletic show” put on by the Springfield Moose Club. The two – apparently Lee F. Hanmer and Clarence Arthur Perry of the New York-based Russell Sage Foundation – were repulsed.

Hanmer and Perry were among a dozen Sage Foundation employees who oversaw the Springfield Survey, a massive survey of the city’s economic, cultural, charitable and municipal institutions undertaken in early 1914. Hundreds of local volunteers also participated in the survey. 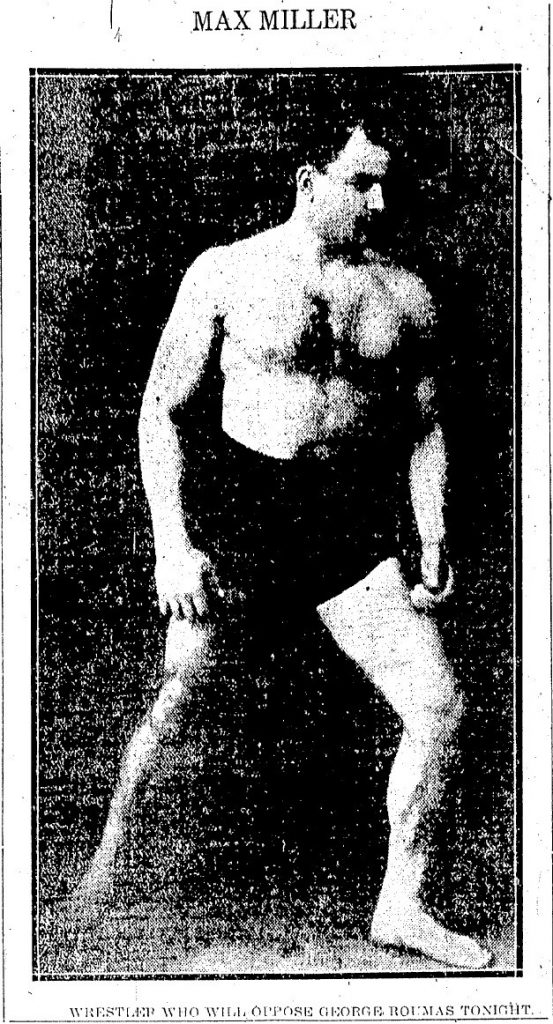 Max Miller, the Moose Club’s headliner, was a wrestler and strongman in town for a bout with a local wrestler (Courtesy State Journal-Register)

Social surveys were abandoned as a sociological technique by the 1930s, but the Springfield Survey left this city with an extraordinarily revealing look at life in 1914, especially as it was experienced by people who don’t usually make it into the history books: common laborers, schoolchildren, petty criminals, and the poor, mentally ill and feeble.

The survey’s results were reported in a dozen pamphlets published between late 1914 and  1921. Hamner and Perry’s report on the Moose Club show was part of the survey’s examination of recreation opportunities in Springfield.

Note that the survey didn’t identify the club that put on the “athletic show.” However, the survey did say Max Miller, a wrestler and vaudeville strongman from Chicago, was part of the entertainment, that the “M—- Quartet” sang, and that the event was mentioned in Springfield newspapers. SangamonLink used that information to identify the Moose Club. The club had a meeting hall upstairs at 124 S. Sixth St., where it sponsored dances, shows and other events; a series of wrestling bouts was a special attraction in spring 1914.

Here is the Springfield Survey’s report:

Of all the elements of a city’s recreation, that afforded by private organizations offers the least occasion for community concern. … A large part of the value of these groupings arises from the freedom of initiative which they enjoy. Of course, wherever large freedom is granted it frequently happens that it is abused by a certain few. An instance in point is afforded by an “entertainment” included in the above list.

The event in question was held by a prominent club on March 30 (1914) in their club rooms. It was announced in the newspapers as an “Athletic Show” and it began with a “battle royal” boxing bout among five Negroes. Five burly men, stripped to the waist, entered a roped arena on a platform. At the stroke of the bell two couples immediately began sparring. The fifth man then pitched into one of the boxers who seemed to be having the best of it, thus breaking up the pair. The released man turned to the other group and, picking out one of the men, began without warning to punch him. And so the fight proceeded. No matter how cleverly a man might be holding his own, he was always in danger of having someone come at him from behind with a none too well padded fist. Scientific boxing was not in evidence. The contest was one of brutal physical endurance. When a man could keep it up no longer, he left the ring, and the winner was the man who stayed in the longest. As announced, the winner was to receive $4.00, the second place man $2.00, and the third $1.00.

The second event consisted of exhibitions of strength by Max Miller and his associates. The third number was a six-minute round boxing contest between the “K—— brothers,” aged seven and nine years. Two white-skinned little boys, not yet out of the primary grades, in a prize-fighters’ ring, fighting for the amusement of several hundred business men and sportsmen! At the end of the contest a shower of nickels, dimes and quarters rained upon the mat in token of the crowd’s appreciation. Two more boxing contests filled out the evening’s entertainment, one a friendly contest in which the winner was picked by the referee’s decision, the other running only five rounds which ended in a knockout. The M—- Quartet sang between events. …

There is a state law in Illinois which forbids prize fights. In this case it was evaded by calling it an athletic exhibition given by a private club for its own members. The tickets of admission did indeed bear the legend “Member’s Ticket,” but a couple of strangers who had been in Springfield only a few weeks encountered no difficulty in purchasing them. Indeed, if all those in the audience were members of the club, it is a large and thriving organization! …

Only two recommendations are called for by this situation. The first is the responsibility which rests upon all individuals of the city to avoid participating in or being members of groups which offer any brutalizing, illegal, or unwholesome kind of entertainment; the second is the obligation resting upon the community to provide meeting places in wholesome environments, and activities designed to offer a full outlet for all the healthy impulses of men and women. Of course, it is also expected that the police will be alert to prevent such violations of the law as the one described above.