Route 66 artist Bob Waldmire (depicted, left center) designed this mural, located across the street from the Illinois Route 66 Hall of Fame and Museum in Pontiac, but did not live to paint it himself. (All photos Sangamon County Historical Society unless otherwise credited)

The Illinois Route 66 Hall of Fame includes plaques for a dozen – or so, depending on how you count them – inductees from Williamsville to Divernon in Sangamon County.

U.S. Route 66, “the Mother Road,” probably the most famous highway in the country, ran from Chicago through Sangamon County to Santa Monica, Cal. from 1926 until its official decommissioning in 1985.  Interstate 55 replaced Route 66 in Sangamon County.

The Illinois Route 66 Hall of Fame originally was established at the Dixie Truckers Home, a Route 66/I-55 truck stop in McLean County, in 1990. The Hall of Fame, operated by the Route 66 Association of Illinois, moved to larger quarters in Pontiac in 2003, where it is part of the Pontiac Museum Complex.

Here are Sangamon County’s members of the Illinois Route 66 Hall of Fame, in the order in which they were inducted: 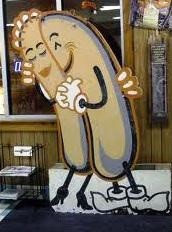 1991: Ed Waldmire family and the Cozy Dog Drive-in, Springfield. Edwin  Waldmire Jr.  invented at least the name “Cozy Dog” and perhaps perfected the recipe – if not the concept – for a batter-covered hot dog on a stick. He certainly mastered the art of publicizing his Cozy Dog Drive-in, which became an iconic stop for people travelling Route 66 after 1949. An updated Cozy Dog was still in operation in the 2900 block of South Sixth Street in 2022.

1993: Bill Shea and Shea’s Finest Truck Covers, Springfield. Bill Shea (1921-2013) operated Texaco and Marathon gas stations along Peoria Road, which was part of some Route 66 alignments, in the 1940s and ’50s. The business evolved over the years – Shea sold boats at one point, then camper tops – but eventually it became a homegrown Route 66 museum and tourist attraction. 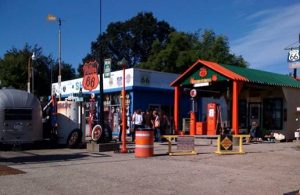 “The look of Bill’s lot has changed over the years,” says the Hall of Fame Museum writeup about Shea’s induction. “But it still has the distinct charm that a business can have only when its owner has spent thousands and thousands of hours there thinking about the state of things.”

Shea’s camper sale museum closed after Bill Shea died in 2013. Ron Metzger of Springfield bought much of the memorabilia Shea had amassed and moved it to his Route 66 Motorheads Bar and Grill, which is at the Toronto Road exit from Interstate 55 south of Springfield.  (It was easy to find in 2022 – motorists could simply look for the sign with the world’s largest Route 66 shield.) 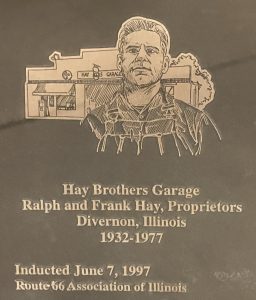 “I just thought he really is typical of so many people who are along Route 66,” Howard Hay, who nominated his father Ralph and uncle Frank to the Hall of Fame, told State Journal-Register reporter Jaime Jordan when the Hays were inducted.

Howard Hay recalls his father giving away used tires to people who couldn’t afford them and sharing food with travelers who didn’t have the money to buy dinner.

“People could wait around the station. If they hadn’t eaten, he’d share whatever we had at home. … In those days, it wasn’t as easy to travel that highway.”

The former Hay Brothers Garage building, constructed as a Ford dealership in 1917, was still an auto repair business, Herman’s Garage, as of 2022. Signs saying “Route 66” and “Interstate 55” hung above the doors. 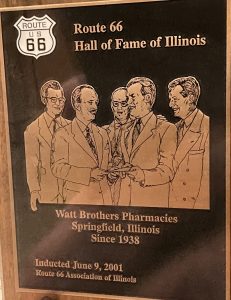 2001: Watt Brothers Pharmacies, Springfield. Each of the four Watt brothers owned a pharmacy, and three of those stores were along one alignment or another of Route 66. According to the Hall of Fame’s history of the family, the brothers and their pharmacies were:

The last Watt Brothers Pharmacy, near the southwest corner of Ninth and North Grand (across North Grand from the original store), closed in 2010.

2005: Tom Teague, Springfield (Ambassador’s Award). Tom Teague (1943-2004) founded and served as the first president of the Route 66 Association of Illinois; established and was the first editor of The 66 News of Illinois; and conceived the Illinois Route 66 Hall of Fame. Teague also wrote a book of stories about people he met along the highway, Searching for 66 (1996). 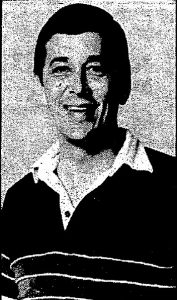 “He was known in Route 66 circles by people from many countries,” says Pat Kuhn, executive director of the Illinois Route 66 Heritage Project. “He was just a tremendous advocate for Route 66, particularly in preservation. Tom worked tirelessly to get historic properties related to 66 on the National Register.”

Teague’s commitment was “all about the people and relationships that he established with others who were so touched by this road and its significance to their lives,” Kuhn says. 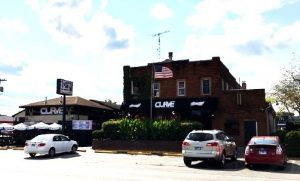 The building opened in 1932 as a grocery/café, Copp’s Corner, operated by Emilio Copp. Guido Manci bought the business in 1945 and changed the name to the Curve Inn. The bar’s website says the Curve Inn has “a scandalous history,” featuring clandestine gambling and prostitution.

Minus the scandals, the Curve Inn under later owners Neil McGillivray and then Ray and Ami Merchant and Don Thompson, developed a reputation as a popular music venue and gathering place. It remained in operation in 2022. 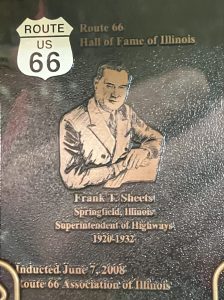 2008: Frank Sheets, highway engineer, Springfield. Frank Sheets (1890-1951) went to work for the state of Illinois as “a blueprint boy” in 1907. He rose to become Illinois’ superintendent of highways and then chief highway engineer from 1920 to 1932, a period that included creation and early development of Route 66.

“His administration of the highway department was during the years of the big Illinois road building program, when the state ‘got out of the mud,’” according to Sheets’ Illinois State Journal obituary.

Waldmire traveled Route 66 from end to end probably dozens of times between the early 1960s and his death, often driving his 1972 Volkswagen van. (When back in Rochester, he lived in a former school bus, which, like the VW, Waldmire redesigned in his own idiosyncratic way: it included a wooden upper extension, rain gutters and solar panels.) 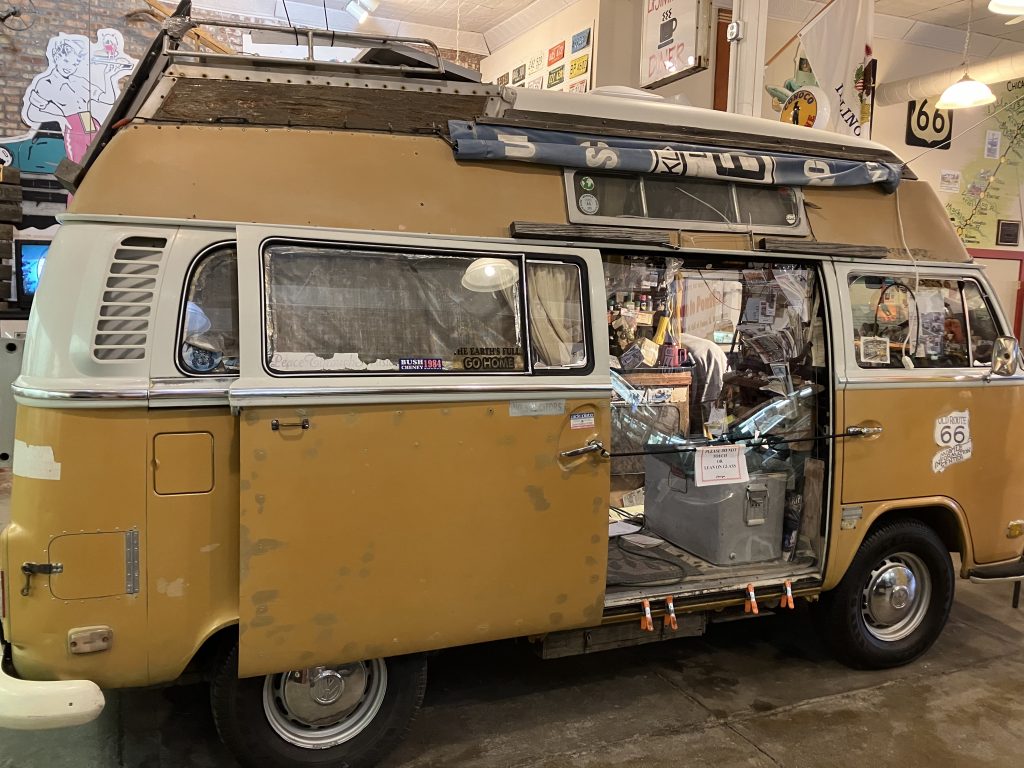 For most of those years, Waldmire made his living by creating artwork revolving around the highway. It was a natural development, Waldmire told interviewers – one of his childhood homes was on City Route 66 in Springfield, and the Cozy Dog drive-in cemented his connection to the highway.

A profile written by Kirby Pringle of the Champaign (Ill.) News-Gazette in 2004 discussed Waldmire’s Route 66 art.

His work has a retro, 1960s quality, and is often done in ink. His studio is frequently a Denny’s restaurant or Flying J truck stop.

“My career as an artist came about as a way to avoid getting a job, pure and simple,” Waldmire said. “It has been a formula that has continued to work for 34 years.”

Before his death from cancer, Waldmire left instructions about disposal of his ashes. Half were buried next to his parents near Rochester and the rest distributed along Route 66. Some of the ashes were released off Santa Monica Pier in California, where Route 66 ends. 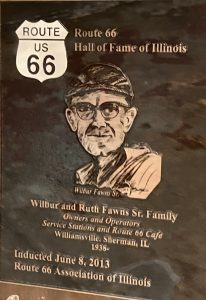 In 1954, he bought a Standard Oil station at 500 S. Oak St., also on Route 66. That station was known for its distinctive illuminated sign. “There were individual letters spelling STANDARD that lit up one letter at a time and then all at once,” Wilbur Fawns Jr. wrote in a 2013 family history. “The lights could be seen for miles around, a beacon on the highway.”

“For 75 years, the Fawns family had been on Route 66 in Williamsville and Sherman, fixing vehicles, pumping gas, and slinging hash for travelers, truckers and local families,” Wilbur Jr. wrote. “The numbers are incalculable and awe-inspiring.” 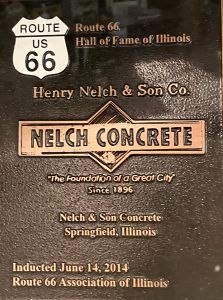 2014: Nelch & Son Concrete, Springfield. Henry Nelch & Son Concrete operated in the 800-900 block of South Ninth Street, on the 1930-40 alignment of Route 66, from 1896 until 2015. “Not only did the business play a role in constructing roads in the region, but also with many buildings, sidewalks and parking lots,” Route 66 News said in reporting the company’s induction into the Illinois Route 66 Hall of Fame. The company, founded by the son of German immigrants, was considered at the time to be the oldest family-owned company in Illinois.

John Lucchesi’s nomination of Nelch & Son to the hall added:

While the road surface for Route 66 in Illinois has a connection to the company, it is important to remember that many buildings that housed numerous businesses along Route 66 were constructed with materials from Henry Nelch and Son – not to mention all those parking lots and sidewalks used by the traveler of yesterday and still today.