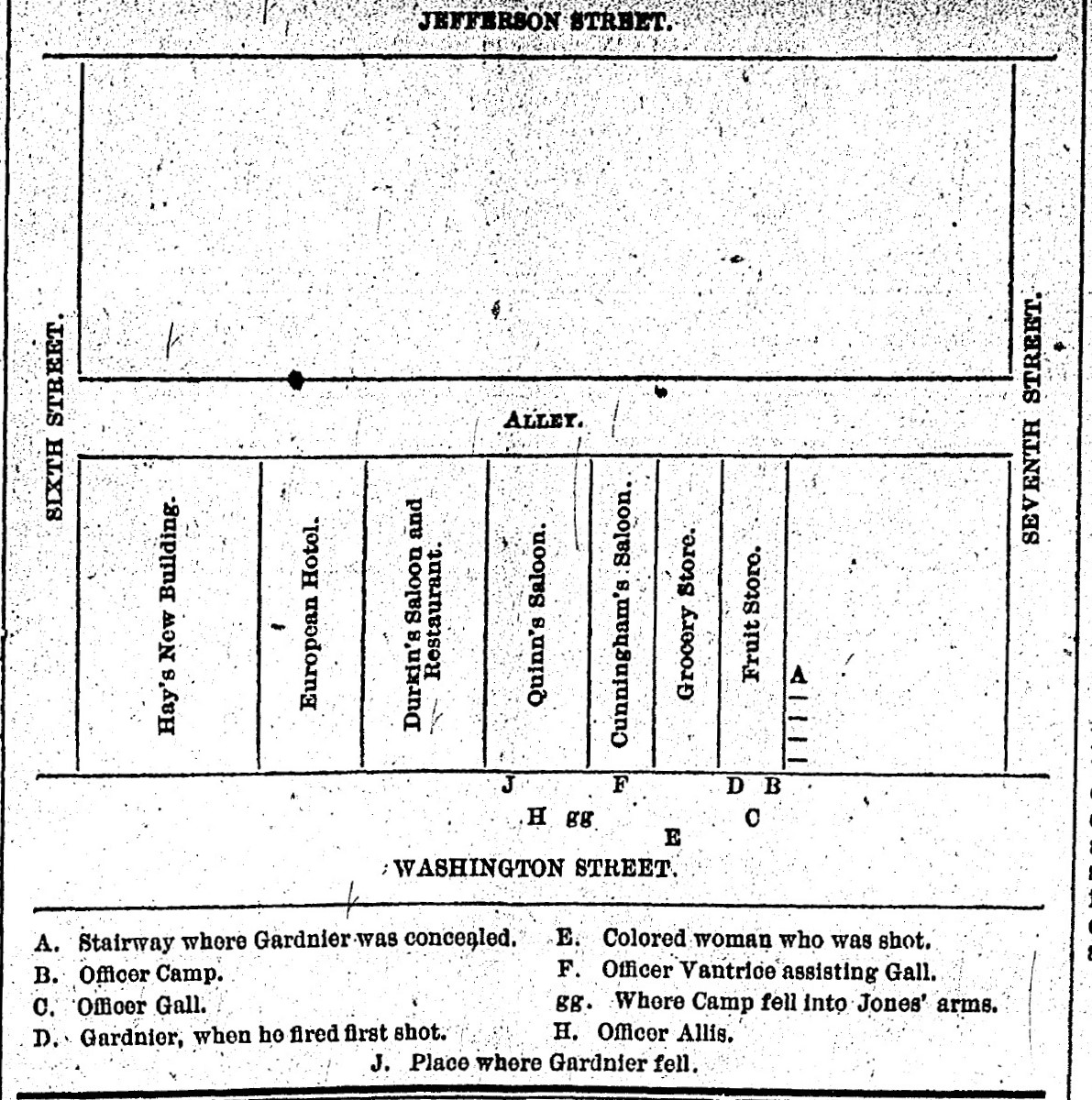 The Aug. 25, 1885 edition of the Illinois State Journal included a rudimentary graphic showing the positions of those invoilved in the shootout between police officers William Camp and Fred Gall and gunman Leonard Gardnier. Also mentioned in the map legend: Mary Gatewood (“Colored woman who was shot’) and three officers who responded to the shots: Evan Jones, Phil Allis and Henry Vantrice. (Courtesy State Journal-Register)

When Leonard Gardnier left his Springfield apartment the evening of Aug. 23, 1885, he told his wife to “dress up real nice, because he wanted her to make as pretty a corpse as possible.”

An hour or so later, Gardnier, waving two revolvers, stepped out of a stairway on Washington Street to confront police officers William Camp and Fred Gall. Within moments, Gardnier and Camp lay dead and Gall had been mortally wounded.

“The most shocking tragedy in Sangamon County history,” as the Illinois State Register called it, culminated several days worth of drinking and violence by Gardnier. Thanks partly to his wealthy wife, Gardnier operated two businesses – a restaurant/fruit stand on Sixth Street between Adams and Monroe streets and a confectionery in the 700 block of East Washington Street – but he was known to be “surly and dangerous” when under the influence, the Register  said.

Gardnier was a bad man at all times, and when drunk was a perfect fiend, often threat(en)ing the life of his wife and at times subjecting her to personal violence. For a week previous to the tragedy he had been upon a spree and his wife was in continual dread of her life.

The two police officers had arrested Gardnier about 1 a.m. Sunday, Aug. 23, 18 hours before the shootings, in the Gardniers’ apartment above the restaurant on Sixth Street.

Gardnier, well into his spree, had come home “and immediately began inaugurating a perfect hell there, breaking up furniture, flourishing his revolver, swearing he would kill his wife, and finally going to the front window, began tearing down the curtains,” the Journal said.

Camp and Gall, patrolling across the street, heard the commotion. They ran upstairs to the apartment and arrested Gardnier.

“He was placed in the calaboose, swearing in the presence of the officers at the station that he would have the heart’s blood of Gall and Camp, that he would shoot them on sight, and like threats,” the Register reported, “all of which the officers paid little attention, as it is no unusual thing in their experience.”

A slightly more sober Gardnier put up $7 bond later that morning and was released. According to the Journal:

Immediately upon gaining his freedom he went to a Washington street pawnshop and purchased two revolvers, then went to his home and said to his wife that he was going to kill those d–d policemen as soon as they came on watch, and would then kill her; also made the same statement to “Dad” Cullen, barkeeper at Ward’s saloon. How well he carried out this threat the public well know. Mrs. Gardnier probably owes her life to the bullet that ended her husband’s.

Camp and Gall had just begun their Sunday evening tour of duty when Gardnier attacked them. He had been waiting in a stairwell next to a fruit stand on the north side of Washington Street between Sixth and Seventh streets, the Register reported. “Gardnier stepped out in front of the fruit stand and, addressing the officers with curses and vile epithets, drew two self-cocking revolvers and began firing at them.”

Camp, hit once in the chest, lived only a minute or less, but still managed to fire his pistol accurately. Four of Camp’s bullets hit Gardnier, who staggered a few feet before he collapsed and died.

Gall’s gun got caught in its case, so he had grabbed Gardnier and tried to wrestle away the attacker’s weapons. In the process, one of Gardnier’s guns went off, and Gall, hit in the abdomen, fell to the pavement.

A stray bullet – stories conflicted over whether it was fired by Camp or Gardnier – struck a passerby, Mary Gatewood, wounding her in the heel.

“In an incredibly short time, in the neighborhood of 1,000 people had congregated at the scene of the affray,” the Register said, “and the street was filled with a surging mass of humanity, all anxious to learn the particulars of the tragedy.”

Gall was carried to the Leland Hotel, where he died early Aug. 25. Plans had been for Camp to be buried Aug. 24, but his funeral was postponed so the city could hold a combined public memorial on Aug. 26. 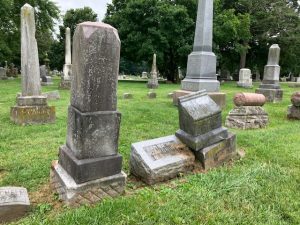 Leonard Gardnier’s gravestone is the dark pillar in left foreground; he is buried next to his parents (the gravestone misspells his name as “Gardiner”). The obelisk in the center distance marks the grave of William Camp. Although the two men killed each other, they are buried less than 40 feet apart. (SCHS photo)

Each family held private services at the officers’ homes. At 2 p.m., hearses took the caskets to the Second Methodist Church  at Fifth and Carpenter streeets (the church was renamed Kumler Methodist, in honor of a former pastor, in 1900) for the public remembrance. Pallbearers were former police officers who had served with each of the slain men.

The caskets were carried from the church to Oak Ridge Cemetery in a procession that included city officials, police and fire departments, 120 members of the Grand Army of the Republic (Camp was a Union Army veteran) and others. The funeral, the Register said, “was perhaps the most largely attended of any that has occurred in this city since the burial of Lincoln.”

The city of Springfield paid all funeral expenses, and a citywide effort collected several hundred dollars for the officers’ families. (In what passed for additional generous gestures, Mayor James Garland waited until Sept. 1 to appoint replacement officers, so the Gall and Camp families could collect a few more days’ pay, and the Leland didn’t charge the Galls for use of the hotel room in which he died.)

William Camp, born in Springfield in 1845, was a coal miner at Springfield’s “West Shaft” in between stints as a police officer and city health officer. He and his wife Susan Comey Camp had five children.

“The earnestness with which he pursued violators of the law made him an object of the hatred of the keepers of disreputable dives and the thugs and thieves who congregate in such places,” the Journal’s obituary said. “His life had been threatened several times before, but he knew no fear and continued in his vigorous work up to the time of his death.”

Fred Gall, also a Springfield native, was born in 1853. Unmarried, he “was the principal support of his parents,” the Journal said.

The paper quoted Sangamon County State’s Attorney James Jones: “Gall has not only sent more lawbreakers to the penitentiary than any other man on the force, but whenever he worked up a case was sure to have the evidence to secure a conviction. I regard him as a model police officer.”

Born in Carlinville in 1848, Leonard Gardnier had two children with his first wife, Ida Elder Gardnier. After their divorce, he married Hannah Robinson, the woman he threatened before attacking the two officers. “Miss Robinson’s family are well to do and respectable people,” the Journal said, “her father on his death leaving property amounting to about $40,000 from which she has been receiving a quarterly allowance of $100.”

Note: William Camp and Fred Gall are two of 10 Springfield police officers who have been killed in the line of duty. Read about the others here.

This entry was posted in Crime and vice, Law enforcement, Local government. Bookmark the permalink.