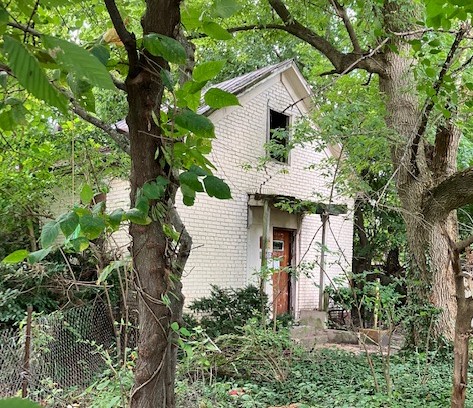 Invisible and almost inaccessible, tucked into the side of the 19th Street overpass, a tumbledown brick building was in 2022 the last remnant of the once-feisty village of East Springfield.

When constructed in 1901, the building served as the East Springfield village hall and “calaboose.”

East Springfield was one of a half-dozen small, independent towns that surrounded the city of Springfield in the late 19th and early 20th centuries. The village’s boundaries ran from Moffat to South Grand avenues east of what was then East Grand Avenue (later 19th Street/Martin Luther King Jr. Drive). East Springfield had 300 residents when it was incorporated in 1900.

Village trustees voted to build a village hall and jail on Oct. 24, 1901. According to the ordinance, “the front (was) to be 20 ft by 30 ft with 10 foot ceiling, to the rear end of which shall be built a calaboose 20 ft by 7 ft, of two cells, both parts of said building to be built of brick, with tin or other metal roofs.” Building committee members James Muldoon, Edward Kelly and George Douglas were appropriated $700 to construct the building.

The hall was located on a 40- by 152-foot lot at 1900 E. Cook St. The Springfield City Directory identifies the building as the village hall and calaboose from 1902 to 1905. From 1906 to 1914, it was listed only as the East Springfield village hall. (That section of East Grand Avenue was renamed 19th Street during the same period.)

The village’s board of trustees met at the hall on Monday nights. East Springfield’s elected positions were village president, village clerk, trustee (there were three), and police magistrate.

East Springfield took in at least two oil distributing facilities, and oil inspections were an important source of revenue. In March 1909, oil inspector John McCough turned over $600 in fees to the village treasury.

Newspaper records mention the “calaboose” only once after its construction: on June 1, 1903, the day after an impromptu village posse crammed 11 members of a Chicago & Alton Railway track-laying crew into the tiny jail.

In the middle of the night, the C&A workers had tried to run a three-block-long sidetrack through the village and into the Springfield Boiler & Manufacturing Co. works at 19th Street and Capitol Avenue. Village marshal Dawson McGinnis and his chief deputy deputized up to 50 village residents, who responded carrying rifles, shotguns, and revolvers. They put a gun to the head of railroad roadmaster James Hughes and ordered his track layers to march to the calaboose. The village constabulary held the men there from 3 a.m. to 9 a.m. 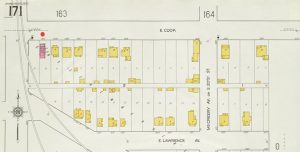 The village justice of the peace found seven of the track layers guilty of trespass and fined them $10 each. Railroad rights through the village remained contentious for several months, but the C&A reached an agreement with East Springfield in November, and the trespass charges were dismissed.

East Springfield had grown to about 1,500 residents by the time it was annexed to the city of Springfield in 1909. Annexation, however, was a two-year-long effort.

Those favoring annexation noted that:

Two annexation referendums were held in East Springfield in 1908. The first narrowly failed, but led to a scandal involving election judges. The second passed, but a judge overruled those results on a legal  technicality.

On April 20, 1909, 336 out of 400 eligible village residents voted on the annexation issue, and annexation passed, 216-113. East Springfield elected officials relinquished their positions, and the village agreed to turn over its property to the city.

The village hall changed hands and occupants several times over the next century. The Old Time Methodist Church, an African-American congregation, occupied it from 1916 to 1924. In 1919, the building’s address changed from 1900 to 1902 E. Cook St. It later was used as a residence, a business, and a storage building.

In 2022, records showed the former East Springfield hall was owned by a resident of Hales Corners, Wis.   The building was apparently vacant and in bad condition, but the structure was still primarily original. Possible original elements included a metal roof, side windows, concrete windowsills, the chimney, and metal bars on the windows of the “calaboose.”

The original red brick had been painted white, a window and door were added to the front, and a small porch was constructed along the east side. The entire lot was overgrown with trees and other vegetation.