The first factory for the Guy’s Dropper, one of the most popular miners’ lamps ever made, was a back porch on Douglas Avenue.

The Guy’s Dropper was a carbide lamp, which uses a mix of water and calcium carbide to produce flammable acetylene gas. Carbide lamps, either carried or mounted on miners’ caps, had started to replace candles and oil lanterns in underground mines about the turn of the 20th century. 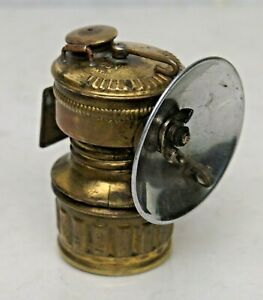 Frank Guy’s most important innovation was a type of valve that improved how water dropped onto the calcium carbide. A Guy’s Dropper lamp cast evenly diffused light over a wide radius. “I wouldn’t be without one,” an anonymous miner commented for an Illinois State Register story in 1923.

Guy (1860-1938), a miner himself, had been experimenting with carbide lamps for several years before coming up with his new design about 1913.

“The demand for an improved lamp in the mining industry was large,” the Illinois State Journal reported in 1930.

This device, therefore, had excellent possibilities. But Mr. Guy was not in a position to manufacture his invention at the time in considerable quantities. George R. Shanklin, a local resident, was attracted to Mr. Guy’s invention.

A short time later he set up a workshop on his back porch on Douglas avenue to test out its possibilities. Its value was proved in a short time.

This company has been recognized for years as one of the leading producers of acetylene mining lamps in the country. This reputation has been extended even to foreign lands. Exportation of lamps is now being made to England, Scotland, Sweden, South Africa and Australia. Recently company officials learned that South African natives were using these lamps to light their thatched houses at night.

The Shanklins sold the company to a New York investment group in 1927. Shanklin Manufacturing expanded its marketing over the years, producing miners’ lunch pails, other metal items and even awnings.

The Great Depression, along with a declining market for carbide lamps, pushed the company into bankruptcy, but entrepreneur Jacob Sherman bought the Harvard Park site. Under the name Park Sherman Co., the former Shanklin factory manufactured cigarette lighters, desk accessories and novelties until 1960.

The Dropper made Frank Guy’s last name known around the world, and he held three patents on different aspects of the lamp. It’s not clear, however, that he made much money from his inventions – Guy remained a coal miner well into his 60s.

Guy is buried at Oak Ridge Cemetery, as are William and Edgar Shanklin. George Shanklin is buried in Florida.

This entry was posted in Business, Coal mines and mining, Industry, Prominent figures. Bookmark the permalink.