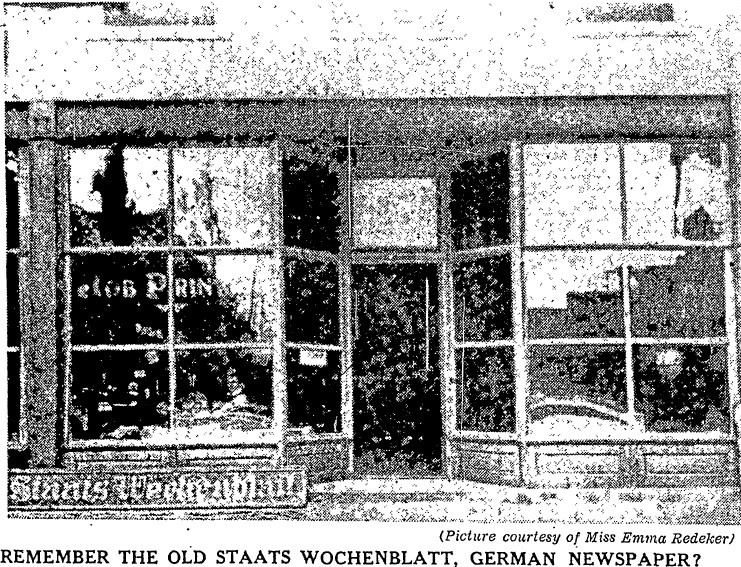 German-language newspapers came and went for more than 60 years in Springfield. Abe Lincoln even had a hand in one. But the Staats Wochenblatt had staying power.

German immigration to the U.S. took off after the failure of the German Revolutions of 1848. By 1870, according to an estimate published in Germans in Illinois by Miranda Wilkerson and Heather Richmond (2019), 4 to 10 percent of Sangamon County’s population had been born in Germany; that meant the county was home to somewhere between 2,000 and 5,000 people who probably were more fluent in German than English.

Here’s a look at some of central Illinois’ most important German-language publications.

Lincoln and the Anzeiger

Abraham Lincoln figures in one of the earliest of Springfield’s German-language publications. In May 1859, Lincoln loaned Dr. Theodore Canisius, a Springfield physician, $400 to support Canisius’s Staats Anzeiger, “a German Republican paper.”

Lincoln’s letter accompanying the loan was unabashed. Lincoln owned the press and the German type, but Canisius could use the equipment, the letter said. However, that agreement would remain in effect only as long as the Staats Anzeiger did not “depart from the Philadelphia and Illinois Republican platforms,” Lincoln wrote. “(F)or a material departure in that respect, or a failure of said paper to issue as often as weekly, or … to print with them any thing opposed to, or designed to injure the Republican party, said Lincoln may, at his option, at once take possession of said press, types &c, and deal with them as his own.”

The equipment would revert to Canisius, the contract said, if the doctor held up his end of the bargain through the 1860 presidential election. Canisius apparently did so, since Lincoln forgave the debt.

(In 1862, Lincoln even appointed Canisius the U.S. consul in Vienna, Austria, but that may not have been solely out of gratitude. “The place is but $1,000, and not much sought,” Lincoln told his secretary of state, William Seward, “and I must relieve myself of Canisius.” Canisius went on to get himself fired by embarrassing Lincoln and the U.S. in connection with Giuseppe Garibaldi’s revolt in Italy.)

The Anzeiger, a weekly like most of the German papers that followed, continued to publish after Canisius left Springfield for Vienna. In March 1865, however, the Illinois State Journal published a short item:

DISCONTINUED. – The Illinois State Anzsiger (sic), for several years past published in this city, has been discontinued. The Anzsiger was established as a Republican paper, but last fall went over to the Copperheads, since which time its decline has been rapid.

Immediately after the Civil War, Springfield Germans could choose between rival papers, one Republican (the Illinois Post) and one Democratic (the Staats Demokrat). Both were founded in 1866. The Staats Demokrat lasted longer, but the Post’s editor had a more compelling  background.

Hermann Lieb (1826-1908) was a Swiss immigrant who enlisted to fight in the Civil War as a private and ended up a brigadier general. He also was one of the first Union Army officers to volunteer to lead an African-American regiment.

Lieb was in overall command of Union troops at the battle of Milliken’s Bend near Vicksburg in June 1863, and his own regiment, the 5th U.S. Colored Heavy Artillery, was in the thick of the fighting. The 5th’s casualty rate – 67 percent – at Milliken’s Bend was the highest of any unit during the war. 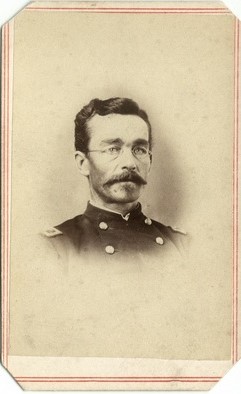 It’s probably not surprising that, in announcing his new German paper to English-speaking readers in the Illinois State Journal in July 1866, Lieb was forthright about the Post’s position on civil rights.

We advocate unconditional equality before the law for all men, without regard to place of birth, nationality, or complexion. …

We regard it as one upon the loyal portion of the American people a self-imposed duty to guarantee to the four million of freedmen their freedom, to protect them inj the enjoyment of the same, and to secure them protection against the encroachments and assumptions of their former masters.

Lieb, however, couldn’t make a go of it in Springfield. He closed the Post and moved to Chicago in mid-1868. The Democratic-aligned Illinois State Register gave the Post a memorable send-off.

(T)he Illinois Post, which at one time was an apparently vigorous German radical (“radical” meaning “Republican” – ed.) paper, has now deceased. This last corpse will be removed to Chicago and will leer and gibber with a mouldy grin at the obsequies of the radical party, which will occur on the 4th of November.

The Staats Demokrat published until 1872, when its owner/editor, Christian Lohmann, moved to Springfield, Ohio, to found a German newspaper there. Over his lifetime, Christian Lohmann reportedly started 37 newspapers in seven states.

The Illinois State Journal was more respectful about Lohmann’s departure than the Register had been about Lieb’s: “Mr. Lohmann has conducted his paper with ability, and his friends here, while regretting his removal, will wish him prosperity in the new field of labor he has chosen.”

Competition for Springfield’s German readers continued to the end of the 19th century. Three newspapers dominated: the Freie Press, the Springfield Zeitung and the Staats Wochenblatt. The first two were allied with the Democratic Party; the Wochenblatt seems to have been independent.

At its founding in 1872, the Freie Presse brought in a young managing editor, Fred Gehring, from Indianapolis. Gehring (1841-1909) threw himself into local politics; he eventually served two terms as Springfield alderman and one (1876-77) as state representative.

When the YMCA built its new home at Fifth Street and Capitol Avenue in 1884, the cornerstone included copies of nine local periodicals; three of them were published in German. The Monatlicher Hausbesucher — the Monthly Home Visitor — was a German-language magazine that apparently lasted only a couple of years. (SJ-R)

Although it began as a weekly, the Freie Presse was initially prosperous and by 1884 was publishing three editions each week. However, Gehring left Springfield that year to edit a German paper in Kansas City, Mo., and, whether the key was Gehring or not, the Freie Presse fell on hard times.

By the time the Staats Wochenblatt bought it out in 1890, the Freie Presse had only about 400 subscribers and “has not for several years past been on a paying basis,” the Illinois State Register reported.

Dr. Gustavus A.H. Wendlandt published the Springfield Zeitung from 1894 until 1899. Wendlandt had a contentious relationship with the Staats Wochenblatt’s founding editor, Henry Schlange,.

Shortly after the Zeitung began printing, the two papers disagreed over whether a certain “Professor Gregorwitsch,” a purported hypnotist and mind reader, was a fraud. The Zeitung was anti-Gregorwitsch, the Wochenblatt apparently pro, or at least neutral. The Illinois State Register reported the climax of the campaign to its English-speaking readers.

Dr. Wendlandt said that Prof. Gregorwitsch went to his office and began abusing him, making strange movements with his hands as if trying to hypnotize him. The doctor said he shoved the professor out and that the latter, losing his balance, fell down stairs, but to spectators below the spectacle presented by the professor as he sprawled out on the street was that of a man who had been kicked down. …

Dr. Wendlandt said that Schlange sent the professor over to clean him out.

Schlange sued Wendlandt for libel over the controversy, but the two settled out of court.

Wendlandt sold the Zeitung to printer Edward Hartman in 1899. Schlange, however, immediately bought out Hartman and closed the Zeitung, eliminating the Wochenblatt’s last local German-language competitor.

The Staats Wochenblatt, founded in 1878, published weekly (the name means “National Weekly”) for more than 40 years under three editor/publishers: Schlange (1844-1911), a former tobacconist born in Hanover, Germany; Adolf Wulff (1811?-96), a professional newsman whose career took him throughout the Midwest; and Benjamin Sexauer (1870-1965), who owned the paper for its final two decades.

The Wochenblatt was hurt by anti-German sentiment during World War I and by Prohibition, which cut off its beer advertising (Sexauer was among a group of “wets” who went to court to challenge the results of Springfield’s 1917 prohibition vote). But by 1920, when the Wochenblatt went out of business, the vast majority of Springfield’s ethnic Germans were comfortable with the English language and English newspapers.

“In its time,” the Illinois State Register said in a look back at the Wochenblatt in 1945, “this weekly reached most of the representative German families in Springfield and Central Illinois.”

Hat tip: Brent Wielt. Thanks for the suggestion.