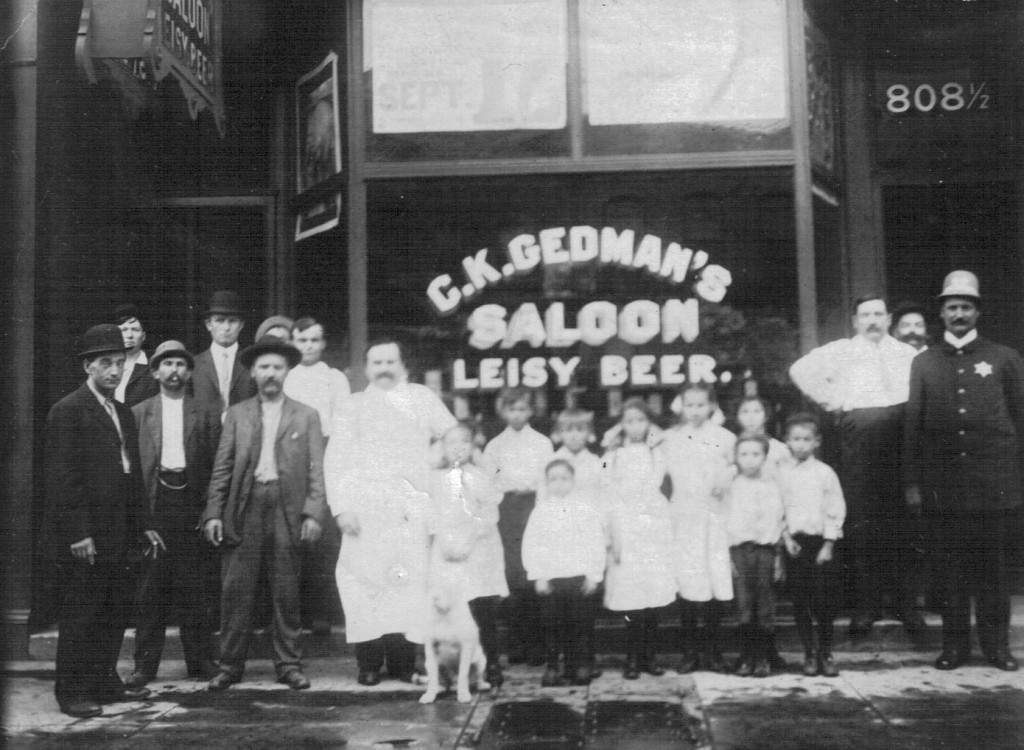 Most of Sangamon County voted itself “dry” as soon as it legally could in 1908. But it would take four referendums and nearly 10 years before the city of Springfield finally succumbed to prohibitionist sentiment.

After a bitter struggle, the Illinois General Assembly approved what was called the “local option” process in 1907. The law allowed local residents to decide whether to allow liquor sales within the boundaries of individual counties and townships.

The first chance for Sangamon County residents to cast anti-saloon ballots was during the April 1908 township election. Twenty-three of the county’s 27 townships put the question on the ballot (there were no saloons in the other four “and probably never have been,” the Illinois State Register reported), and 21 voted themselves dry.

One of the two that didn’t, however, was Capital Township, whose boundaries were the same as the city of Springfield. (The other township was New Berlin.) The impact on the county’s liquor trade can be seen by comparing the number of saloons in the city – 203 – to the numbers that were forced to close everywhere else in the county: a total of 46. The four saloons in New Berlin, of course, remained open. 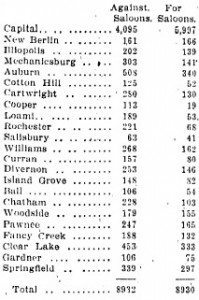 The Illinois State Journal noted in September 1907 that prohibition sentiment was strongest in rural areas. As a result, the newspaper said:

The city of Springfield is regarded by the saloonkeepers as a stronghold. This is largely due to the fact that the boundaries of Capital township are co-extensive with the city. Thus there is no farmer vote to contend with.

Saloon opponents faced one other drawback in 1908 that would be removed during later votes: Women still could not vote. Nonetheless, there were still more “dry” ballots cast countywide than “wet” – by two. (The vote by townships is shown in the accompanying table.)

Even though Springfield decisively defeated the anti-saloon proposition, Mayor Roy Reece took note of the fact that 40 percent of city voters had voted to ban liquor sales and promised to institute new saloon regulations. A week later, Reece ordered all saloons to be closed between midnight and 5 a.m.

That appears to have been the limit of Reece’s crackdown, but stronger measures probably would not have made it through the city council anyway. Council members later rejected Ald. Harry McGrue’s proposal to ban new saloons in the city’s “residence district” – basically, anywhere outside a proposed downtown saloon district. His plan was prompted by what the Register called “a general march of saloonkeepers to this city” after they were forced out of the nearby small towns.

The Register also reported on another setback for anti-saloon forces in July.

The free lunch grabber need have no fear of the future, as the council saw fit to leave that immemorable custom inviolate. Aldermen Neuman, Haker and Haynes voted to abolish the aforesaid luxury, but the hungry majority voted them down and out.

The 1908 local-option votes took place only four months before the Springfield race riot of August 1908. The riot was a major selling point when prohibition advocates tried again to enact a saloon ban in 1910 (the state law required a two-year waiting period between local-option referendums). Here is the partial text of a nearly half-page ad in the April 4, 1910 Register; the boldface is in the original:

(T)he saloon men say the “saloons were not directly or indirectly responsible for the riot,” yet they say, “immediately following the first act of violence all saloons were closed.”

Strange the Mayor didn’t close the hardware stores, isn’t it?

He had a right to be, and you never voiced protest or complaint to the public! … The people knew where the riot came from and you knew it. … Tell us why some of the other businesses not responsible for the riot were not closed, will you? Your business was the only business (guilty or innocent) in the entire city which had to be closed. CAN YOU EXPLAIN WHY?

Springfield remained wet after the April 5, 1910, election, although anti-saloon forces gained a net 370 votes (the final count was 5,840 in support of saloons to 4,408 against). Elsewhere in the county, Riverton (Clear Lake Township) and Auburn overturned their liquor bans, while Divernon stayed dry by only six votes.

Women got their first chance to vote in a local-option election in 1914, following the General Assembly’s approval of limited women’s suffrage in 1913. Under the law, women’s votes were cast and counted separately from those of men, after which the totals were combined.

Women’s votes were crucial to turning Joliet, Bloomington and Decatur dry, along with many other cities around Illinois. But not in Springfield, where the Register headline read “Springfield goes ‘wet’ with a terrific splash.”

The vote totals were double that of 1910, but not only because of the new women’s votes. Both wets and drys, with experience gained in the two earlier local-option campaigns, organized comprehensive get-out-the-vote efforts. The Journal described some of their tactics.

Workers representing both sides … were stationed outside of each polling place, supplied with printed lists of every man and woman in that precinct entitled to a vote, and as each put in an appearance their names were checked from the lists. …

Those who failed to vote, either were compelled to go into hiding or absolutely refuse to participate in the election. If the voter was so inclined, it was absolutely unnecessary to go to the trouble of walking to the polling places. All they had to do was wait awhile and soon an automobile or carriage would be dispatched in search of the missing voter.

The liquor interests especially had made unusual preparations for getting the voter to the polls. Every public service automobile and taxicab in the garages of the city were engaged hours in advance of the election by the “wets” while throughout the surrounding country farmers who owned automobiles found an opportunity through the saloon advocates for the special use of their cars, if they so desired. …

What the dry forces lacked in the way of equipment for hire in carrying the voters to the polls was made up in the persistency with which they covered the precincts in each instance. Family autos, the family carriage, the phaeton and road wagon were all in use throughout the day, and nothing was left undone to see that the aged, the crippled and the able bodied, if necessary, were afforded every opportunity for voting. …

For the benefit of workers about many of the polling places, temporary lunch stands were established by the anti-saloon forces in nearby residences where hot coffee and sandwiches were dispensed free.

Turnout amounted to 83 percent of registered voters, and long lines greeted some election workers when they opened their precincts. However, the Journal said:

The voters were in good humor, the crowd was cosmopolitan to the utmost degree, but with all there was evidence of the intensity with which they viewed the situation, and with minds already made up, they only awaited an opportunity to record their wishes.

After the votes were counted, Springfield anti-saloon leader Dr. Hugh Morrison said he wanted to be “counted as a good loser.”

“A defeat is a defeat only to those who acknowledge it,” he said, vowing to mount another local-option campaign as soon as possible.

Other “dry” organizers, most of them churchmen, were less gracious.

“The vote of the women is a sad commentary on women suffrage,” said Rev. George Gunter of Second Presbyterian Church. “Something is radically wrong. Either woman suffrage is not what it claims or there is something rotten.”

Elsewhere in the county, New Berlin voted itself dry, while Auburn and Riverton remained wet.

Anti-saloon forces took two important steps before the next local-option vote on April 3, 1917: they hired a professional campaign manager, and, following his advice, de-emphasized church involvement in the effort. The result was a sold victory by the anti-saloon movement – this time because women voters strongly supported the proposal. Women voted 6,105 to 3,728 to ban liquor, overrunning the male vote, which was 4,659 for prohibition to 6,547 in favor of saloons. Totals were: dry, 10,764; wet, 10,295.

The drys’ campaign manager, J.H. Hammond, previously had led a successful statewide prohibition effort in Michigan. The Register described his strategy the day after the successful anti-saloon vote.

When he arrived here he told the campaign committee that they must immediately divorce the church from the campaign.

“Make a political fight out of it,” he told the dry leaders here. “Build up an organization that cannot be torn down.”

He was given a free rein and … (b)efore he got through he had a representative in practically every section of each precinct. He had a list of the names of nearly every “sure dry” and “probable dry” voter in springfield.

Often “wet” leaders were heard to remark, “We are not dealing with an easy guy in that guy Hammond.”

Saloon owners were surprised by the results, the Register said.

“Who’d a thought it?” was the question posed by one “fat bartender who has mixed cocktails, fizzes, highballs, and other alcoholic concoctions in a downtown bar for twenty years,” the newspaper reported.

“The defeat was so unexpected that the saloon throngs were dazed, so dazed that they almost celebrated the defeat. It was a desperate sort of a celebration, however.”

State law gave the saloons until midnight, May 4, to close. The final hour was largely uneventful, the Register reported.

Joy, song and sorrow went hand in hand as the death knell of Springfield’s two hundred some-odd saloons was sounded and the hands of the clocks in the various bar rooms, cafes and cabarets pointed in the hour of midnight last night.

In the majority of the city’s saloons it was an orderly swan song that was sung. In others however, particularly in the café district in Jefferson street from Sixth to Fourth streets it was a shouting, yelling mob that ushered the saloons out of existence. …

In the cafes special orchestra and cabaret singers furnished music during the night. Free drinks were given by many of the saloonmen as “regular” customers came in to bid their saloon and bartender friends a last farewell. …

When the hour of midnight was sounded hundreds of persons, mostly men, poured out of the cafes in East Jefferson street; some of them were barely able to walk, but the majority were far from being drunk. Most of them congregated on street corners to see if any serious trouble would develop from the crowds that congregated, but nothing more than the mere shouting and yelling of the celebrators took place.

In lieu of legal liquor in Springfield, some wags suggested building a special trolley line to Divernon, which voted itself back to “wet” status April 3 (Riverton, however, once again became “dry).

The saloon owners had predicted before the election that a liquor ban would lead to alcohol being sold by unregulated, illegal “blind pigs, soft drink parlors, clubs, kitchen bars or bootleggers (and) hip pocket venders.”

The prediction was borne out. The 1916 city directory listed 208 saloons in Springfield; they all vanished in the 1918 directory, but were replaced by 80 “soft drink” parlors, a classification brand-new to the directory that year. The Leland Hotel became a tea room, and some other taverns were, at least nominally, converted to pool halls, groceries and other establishments where a knowledgeable patron could get an alcoholic drink with a knowing nod or password.

Saloon supporters also announced plans to try to reverse the 1917 local-option vote at the 1919 elections. By then, however, local option was no longer possible: the 18th (Prohibition) Amendment to the U.S. Constitution was approved in January 1919 and went into effect in 1920.