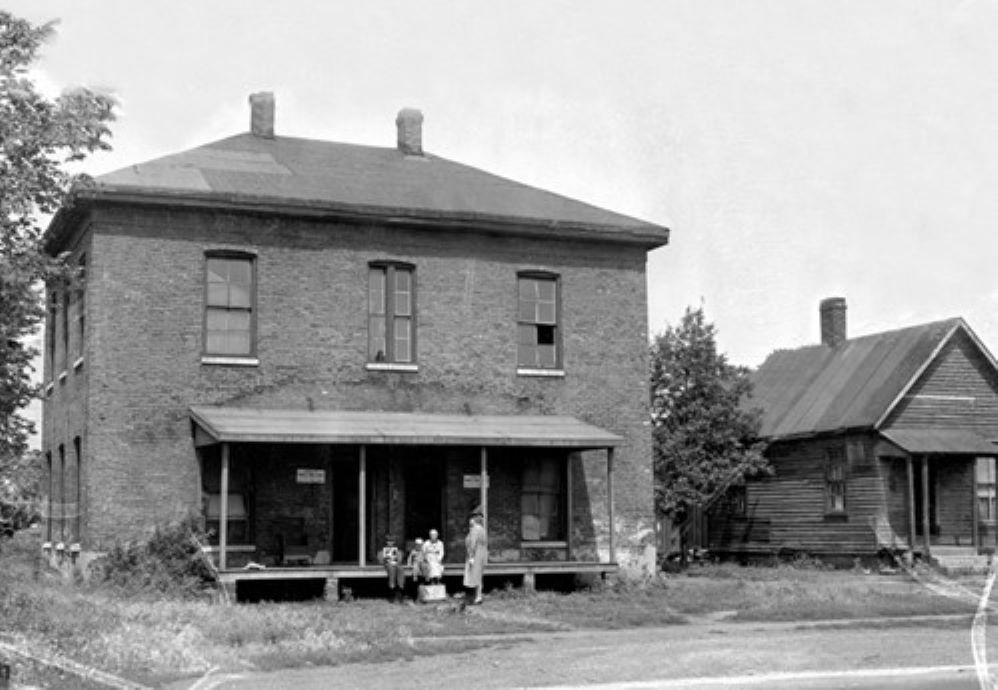 Springfield’s Colored Baptist Church created what apparently was the city’s first school open to African-American children in the late 1840s. It was a struggle to keep open, but it took a decade before the city finally opened a public school – a segregated one – for Black children.

The Colored Baptist Church (now Zion Baptist Church), whose building was on West Washington Street, apparently had been operating a school for their children several years before 1850. However, tuition was expensive, and the school had trouble maintaining enrollment.

So in 1850, eight school trustees – Thomas Cox, John Jackson, William Butler, Henry Baylor, James Blanks, William Baker, Aaron Dyer, and Samuel Ball – decided to hold a public supper to raise money for a permanent school. “(F)inding themselves too weak in point of numbers to sustain a School permanently among them,” a newspaper ad said, the trustees “have appointed a committee of females to solicit donations among our white friends forward making the Supper; and we hope that their claims will not be disregarded.”

The results of the appeal are not known. Newspaper files also give no indication how the school fared over the next few years.

In 1855, however, two other trustees of the school advertised an opening for a teacher. “A competent teacher, will be well paid,” they promised.

But an irritant remained: even though no Black children could attend the city’s public schools, African-American residents had to pay local school taxes just like Whites.

In 1857, the city school board appointed a committee to find a way to use school taxes paid by Blacks to support a school for Black children. And finally, on Dec. 23, 1858, the city Board of School Inspectors (the Springfield school system was part of city government until 1911) organized a free Black school and directed the school superintendent to procure a teacher and a location using $200 in city funds.

One year later, the school board appointed Thomas York (1821-1901), a White man, as the school’s sole teacher and principal. His salary was $300 a year. The School for Colored Children opened in a one-room building behind the African Methodist Episcopal church on Fourth Street near Madison Street.

The city inspected the school annually; despite dilapidated conditions, the students and staff were rated highly each year.

The student body ranged in age from 6 to 15, with females outnumbering males two to one. In 1862, the 55 students in the Colored School had the highest attendance rate of any of the city’s six schools (four primary schools, one in each ward, and the high school were open only to Whites). Due to limited space, only half of those enrolled in the Colored School could attend.

Newspaper accounts referred to children in the school as “spirited,” “vivacious,” “sprightly” and “geniuses.” They were making rapid progress in spelling, grammar, reading, geography, and math, stories said.

The school building, however, didn’t match the students’ enthusiasm. Its single room contained simple furniture, some books, several outline maps, and primary cards. The floor was sunken, glass was missing from windows, and the ceiling was falling. City council members debated whether to repair the school or move it to a different ward. Ultimately, they appropriated $110 for repairs.

A.C. Williams, a vocal teacher, was hired in 1863, but in 1864 the city denied a salary increase for principal/teacher Thomas York, who was being paid $200 a year less than principals of the ward schools. Even the janitor, a Black man making $240 a year, was the lowest paid within city schools.

After the 1866 inspection, the city adopted recommendations for a new school and teacher. Initially, city officials asked to expand the school on the AME church property. The church, however, had its own expansion plans and denied the request.

The city then bought five lots on the west side of North 15th Street near Washingon Street, paying $1,000 to owners Nicholas and Jane Ridgely.

The city also hired Mary Lyman, who was White, as the school’s new teacher (at $400 a year). A plank sidewalk was built along 15th Street from Washington Street to the school. The school building – a two-story brick structure with two chimneys and many windows, costing $2,500 – was completed by 1867.

From 1867 to 1872. the school received stellar inspections and community support based on quality of teaching, learning efficiency, enrollment, attendance, and a low tardiness rate. The school was well-heated, well-ventilated, well-furnished, and spacious. Newspapers reported it was equivalent or superior to the other city schools, although a measles epidemic in 1869 hurt enrollment.

In 1872, lawmakers and the governor approved the Illinois School Law, which stated, “The general assembly shall provide a thorough and efficient system of free schools, whereby all children of this State may receive a good common school education”. In keeping with the 14th Amendment to the U.S. Constitution, the law also deleted the word “white” wherever it occurred in state school regulations.

The Illinois State Journal supported the board’s action, but said in an October 1873 editorial that the School for Colored Children would be kept open “in order to accommodate such of our colored citizens as prefer to send their children there.”

We have been told that the great majority of them probably rather do this, even while possessing equal privileges in the ward schools. However this may be, the School Board, in thus throwing open the schools of the city to its children, has simply complied with the requirements of the law and the Constitution; and we doubt not its action will be duly appreciated and quietly acquiesced in by all our citizens.

In fact, most African-American parents apparently preferred to send their children to the nearest ward school – within a month, only eight students remained at the Colored School. And controversy continued over integration of the ward schools.

Opponents of the change argued that it was dangerous to mix White and Black children, that African-American children weren’t qualified to enter the ward schools and that proponents of integration were catering to Black Republican voters. Springfield was the only town in Illinois “forcing” the law on residents, they said.

In November 1873, the Illinois State Register, reliably racist at the time, published an article condemning “radicals” on the school board for forcing Black children into formerly White schools. As a result, many White students had dropped out of the ward schools, the Register said.

The fact is, as stated in the Register, that the attendance at the ward schools is so reduced in consequence of the action of the board, that two teachers have nothing to do, while those heretofore employed in the separate colored school in the First Ward are also idle.

The resolution offered by Dr. Griffith (school board member Benjamin Griffith, a diehard opponent of school integration) sets forth the facts of the case, and provided for remedying the evil by giving the colored children a separate school in each ward, to be taught by the teachers who are now idle, but who are still drawing pay. The radical majority of the board rejected the resolution, and thus continue to keep the colored children in all the schools, and to pay four teachers who have nothing to do. It seems that the taxpayers of the city are paying dearly for the privilege of having their children educated with blacks.

The newspaper went on to argue that the only negative aspect of having a segregated colored school was that Black children had to travel farther to attend school and that allowing African-American children to attend their ward schools benefited only a few black students. 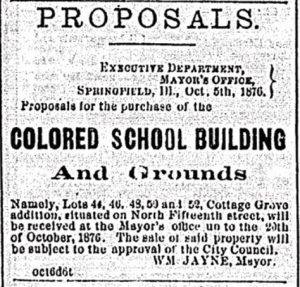 Other towns around the country had similar debates. Some ended in complete disregard for their new school laws or anti-Black terrorism.

In Springfield, however, the school board transferred teachers from the Colored School to other city schools and closed the Colored School by the end of November 1873 (an associated night school tried to remain open). In 1881, the city sold the lots and building to Horace and Isreal Irwin for $1,000.

The former Colored School was a residence for the next 60 years. The Springfield Housing Authority paid Mary Groce $1,700 for the property in 1940. The building was later demolished.

Contributor: Mary Frances. Frances, a college instructor, artist, and independent historian, has lived in Springfield for 33 years and is interested in documenting untold African-American stories.