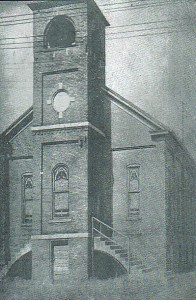 “It was a sad period in history for the African American population,” Zion Missionary’s website says of the church’s beginnings. “They had little to hold onto but their faith and their belief in God.”

The Rev. John Livingston, a traveling Baptist evangelist (and the first ordained black minister in Illinois), and 18 black residents of Springfield organized the church at a meeting held in the home of Anderson Carter on April 21, 1838. Livingston briefly served as pastor. He was succeeded later in 1838 by by the Rev. Luther Arnold.

Congregants met in members’ homes and other locations for nearly 40 years. The first church building (above) was erected in 1877 at Ninth and Carpenter streets, with bricks for the structure being “hand molded and burnt,” the website says, by four church members, including the pastor, the Rev. George Brent.

The name was changed to Zion Missionary Baptist Church in 1894. The congregation eventually purchased property at 16th and Laurel streets for a new church. The first service was held there on Nov. 5, 1972.