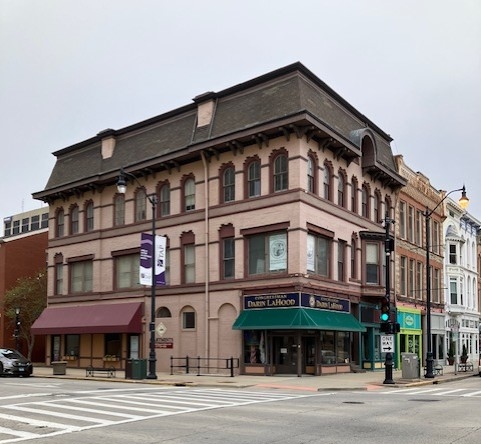 Matt Reavley (1879-1929) was an employee and part-owner of Allen Cigar Store, which at the time had operated for 20 years on the northwest corner of Sixth and Monroe streets. He was carbonating water for the store’s soda fountain when the blast occurred, the Illinois State Journal said.

Reavley had been mixing syrups and connecting tanks in the basement.

He apparently had begun work on placing the tanks in position to be used to charge the water for the soda fountain in the store when the blast took place. His right arm was severed above the elbow by the explosion, and pieces of metal from the tank caused severe lacerations and bruises on his body and right side.

Reavley “for years had dispensed soft drinks, optimism and good cheer, quenching thirst and gloomy spirits,” the Journal said. “From behind his soda fountain counter he met all men equally, shared their joys and sorrows and radiated good will to all.”

The Allen Cigar Store (its formal name, although most people called it “Allen’s”) was at Sixth and Monroe from 1908 to 1987. While it did a good trade in cigars, especially in its early years, the shop was most popular as a lunch counter. 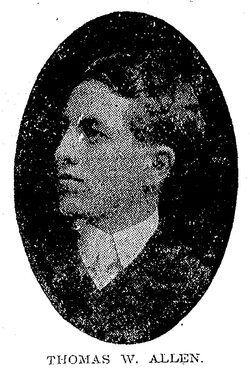 The store’s founder and namesake was Thomas “T.W.” Allen (1880-1923), who opened it after working as a cigar maker and merchandiser for years in Springfield. The incorporation papers said the business’s object was “to wholesale and retail cigars, tobacco and smokers’ articles and to conduct billiard and pool rooms.” In addition to the Sixth and Monroe store, Allen sold cigars at the St. Nicholas Hotel.

Late in life, however, Allen was forced to give up management of his stores due to mental disability. Allen’s attempts to regain control led to an ugly series of court actions pitting Allen against his wife, Frances, who contended her husband suffered mental breakdowns due to paresis, usually a consequence of syphilis.

The question of Allen’s competence went to trial twice – 100 people testified in the first trial, 150 in the second – but neither jury was able to reach a verdict.  At the end of the second trial in June 1922, the Journal expressed doubt about whether any panel of jurors would ever reach a conclusion one way or the other.

“On the witness stand Allen appeared perfectly normal and did not break down, or show any tendency to do so, under cross-examination,” the newspaper said. “It is entirely possible, it is agreed, that a man may have paresis and enter into a period of remission at which time he appears normal.”

A third trial was scheduled in September 1922, but, at the urging of Judge Roger Chapin, the two sides reached a settlement agreement first. Allen regained control of his affairs, but at a cost. Frances Allen (1878-1950) received $25,000 worth of stock in the stores, two other investors – store manager Kohlbecker (c.1881-1944) and John “Buddy” Kapp, later Springfield mayor – bought out the rest of T.W. Allen’s interest, and Allen had to pay for most of the expense of the litigation. The controversy over Allen’s mental abilities was rendered moot a few months later; he died in February 1923. 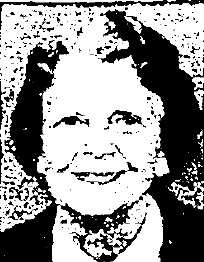 The Reavleys were an example of what togetherness could accomplish, State Journal-Register columnist Pauline Telford wrote when they retired in 1974.

(T)heir happiness and satisfaction with each other created an atmosphere of such pleasantness that customers came to look upon Allen’s as a regular stopping place, if only for a cup of coffee.

Eddie has never met a “stranger.” Those who might have been accounted as such are addressed as “cousin” or “cuz.”

You think that could have been a bit corny?

Not if you’ve ever been a stranger, yourself.

As for the “regulars,” they’re all called by name. …

“Cousin Eddie” is said to have the best “on the run” lunches, and even, at one time, baseball pools, punch boards, and beer and whiskey drinkers, when the store carried a liquor license. … and Eddie carried a bottle of Old Grand Dad or Old Fitzgerald on the shelf.

Its reputation for good clean food and delicious sodas, along with good companionship, has long been identified with that Sixth and Monroe corner. The Reavleys and their Allen’s Cigar Store will be sorely missed.

But oh! the good memories they are leaving behind.

Allen Cigar went through a series of short-term owners from then until 1987, when the shop finally closed. As of 2022, U.S. Rep. Darrin LaHood’s office occupied the ground-floor space that once housed the Allen Cigar Store.