A posse of Pawnee citizens corralled two burglars in a remote crossroads schoolhouse on Dec. 9, 1899. The two surrendered after a tense standoff. But their criminal careers would include one last episode in Springfield.

The men, identified as Frank Burns of Trenton, N.J., and J.L. Herney of Dubuque, Iowa, were suspected of breaking into four homes in the Pawnee area overnight Dec. 8-9. The crimes allegedly were part of a spree that also included thefts the previous week in Mount Olive and Bunker Hill.

Items taken in the earlier crimes included jewelry, watches and a revolver. By comparison, the Pawnee loot was penny-ante, according to an Illinois State Register report: small amounts of money, some clothes, a ring and a child’s necklace and, at one house, “a large cake, which the burglars ate before taking their leave.”

At the home of J.R. Harris, however, the burglars’ candle went out. When one of the men struck a match to relight it, the noise woke up Harris. As he moved toward the thieves, one fired a shot at him. It missed, and the burglars ran from the house. 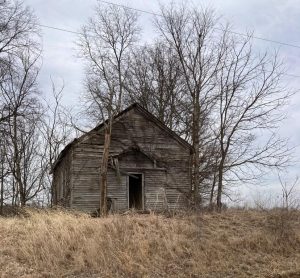 Edward Baxter of Pawnee, a former Sangamon County sheriff, formed posses to search the countryside  for what the Register called the “desperate crooks.” Baxter himself was leading the group that caught up with Burns and Herney the morning of Dec. 10 at the Rienzi Schoolhouse northeast of Pawnee. Among the others in Baxter’s group was J.R. Harris, the burglary victim who had been shot at.

The Illinois State Journal gave the most detailed report of the confrontation that followed.

The men had entered the school building and barricaded the door. Sheriff Baxter forced the door open and, as the door gave way, covered the nearest robber with his revolver and commanded “Hands up.”

The robber, instead of complying with the demand, drew his revolver and aimed it at Baxter. Before he could fire, Harris pointed a shotgun over one shoulder of Baxter and covered the robber with the weapon. Seeing that a fight was likely to result in the killing of himself and his comrade, the desperado weakened and surrendered.

Burns and Herney were taken to the Sangamon County Jail in Springfield, where a grand jury indicted them in January for burglary and assault with intent to kill.

Three days later, however, Burns, Herney and a third prisoner, Robert Baumgartner of Decatur, overpowered two jail guards and escaped from the jail.

The escape happened as turnkey Harry Taylor was in the process of releasing another inmate, John Cooper, from the jail’s bullpen. Jailer Henry Brand stood nearby as extra security. However, the jail telephone rang at the same time, distracting Brand, and Burns, obscured behind Cooper, seized his chance to jump Taylor.

“Taylor and Burns fought desperately and Herney and Baumgartner joined in the fight,” the Register said in a Jan. 19 story. Burns and Herney then began struggling with Brand. Burns grabbed a revolver from a drawer and began hitting Brand with it. “Brand was beaten terribly and will be laid up for some time,” the Register said. 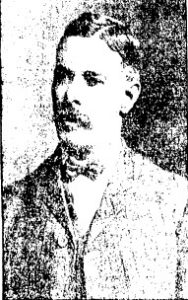 The three inmates fled out the jail door, with Taylor – who also had grabbed a revolver – in pursuit.

“In the alley between Washington and Jefferson streets and Seventh and Eighth streets, Taylor fired five shots at the men, and one of them took effect in Burns’ arm and another in Baumgartner’s left foot,” the newspaper said. “This did not slacken their speed, however.”

Bystanders also took up the chase, along with the indomitable Taylor.

“Detective Evan Jones secured a buggy and drove east on Adams street at a rapid gait. Deputy Taylor attempted to catch the buggy and was thrown to the ground and severely bruised. He later got into the buggy and soon came in sight of the men again.”

Taylor caught up with Baumgartner in an alley behind 10th Street and, pointing his empty gun, ordered Baumgartner to put up his hands. “This command was quickly complied with,” the Register said.

Jones stopped Herney at gunpoint at 11th and Adams streets.

“Both (recaptured prisoners) were badly frightened and begged for mercy, apparently fearing violence from the large crowd that had congregated about the county jail,” the Register said.

That may have been a justified fear. In a story the next day, the Register noted blandly:

Baumgartner and Herney had nothing to say yesterday. Both were sore from the beating they received after being taken back to the jail. They are game, however, and made no complaint.

Burns – who also apparently went by the last name of Feeney and perhaps others – made his getaway despite his reportedly wounded arm. Except for one supposed sighting in Iowa in 1902, he never reappeared in Springfield newspapers. Herney and Baumgartner were sentenced to state prison. 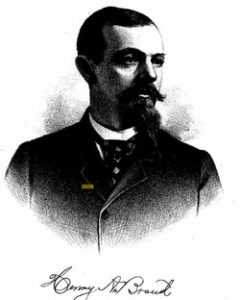 The jobs of both jailer and turnkey were patronage positions. Henry Brand (1849-1906) was a loyal Republican who served a term as treasurer of Springfield Township and unsuccessfully sought the GOP nomination for sheriff in 1894.

Brand may never have recovered from being pistol-whipped by Burns. He resigned as jailer only 10 days after the escape, saying he planned to “adopt another position elsewhere.” Brand died six years later.

Harry Taylor (1861-1928), on the other hand, remained in law enforcement – again, thanks mainly to patronage politics (Taylor at various times belonged to both political parties). Before taking the turnkey job under Sheriff Charles Woods, Taylor was Springfield’s first African-American firefighter. Afterwards, he spent the better part of two decades as a city police detective. 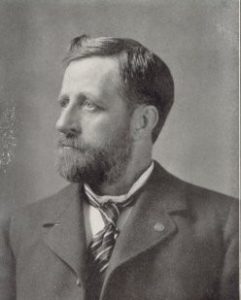 Edward Baxter (1847-1934), Sangamon County sheriff from 1894 to 1898, was one of seven brothers and half-brothers known as “the fighting Baxters.” All seven served in the Civil War from their home state of Indiana, and Edward Baxter was among soldiers who stood guard over Abraham Lincoln’s casket when it was displayed in Indianapolis during the Lincoln burial train’s trip from Washington, D.C., to Springfield.

Baxter moved to the Pawnee area in 1871, working first on farms and then as a contract mail hauler.

“In 1875, Mr. Baxter was employed by Lockridge brothers, merchants of Pawnee. He became known by everyone between Pawnee and Springfield as the fearless and skillful driver of a strapping six horse team which drew the store’s freight wagon,” the Illinois State Journal said in his obituary.

After his term as sheriff, Baxter raised hogs, acted as a swine judge at fairs and animal shows, and was active in the Grand Army of the Republic, the organization for Civil War veterans, the obituary said.

Mr. Baxter was one of the last two survivors of A.J. Weber post 421, Grand Army of the Republic, and the post’s sole survivor in Pawnee township. …

Mr. Baxter was the only Civil War veteran at the last Memorial day services here and directed the work of decorating more than one hundred graves.

This entry was posted in Crime and vice, Law enforcement, Prominent figures. Bookmark the permalink.