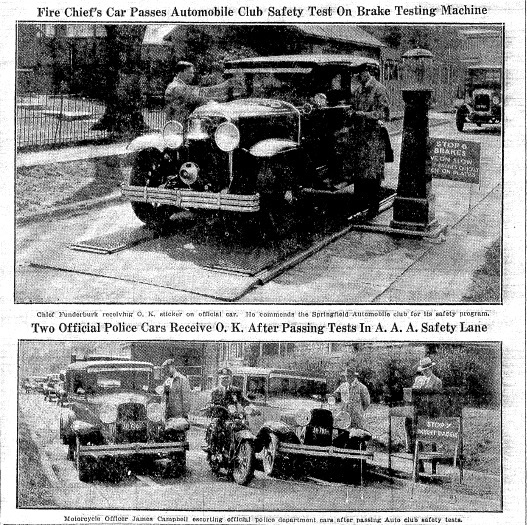 Springfield police and fire department autos were among the first to go through the 1930 Springfield Automobile Club safety lane. (Courtesy State Journal-Register)

Fifteen hundred motorists pulled their vehicles through the Springfield Automobile Club’s free “safety lane” on the south side of the downtown square in April 1930. Some did it twice.

Safety lanes were a nationwide initiative of the American Automobile Association, the local club’s parent organization. But the idea apparently originated in Springfield, the home base for the innovative Weaver Manufacturing Co., whose products included many early auto test devices.

Mechanics working at the 1930 safety lane tested the brakes, wheel alignment, headlights and stoplights, horn and steering gear on each car. The mechanics were provided by local garages and car dealers, but Weaver, whose co-founder Gailard “G.E.” Weaver was an outspoken safety advocate, provided the test equipment.

Motorists whose cars passed all the checks got AAA “safety merit badge” stickers to put on the autos. Those who failed could take their cars elsewhere for repair and return to try again. The lane was open for four days, April 29 to May 1, 1930 – with one interruption, as the Illinois State Journal reported the morning of the last day.

Exactly 1,503 automobiles had been examined at the close of yesterday’s program, and safety merit badges had been awarded to 952 of the drivers. Cars passed through the tests at a rate of four every three minutes in spite of the lull caused by the circus parade, which halted traffic for about thirty minutes.

George A. Bengel, chairman of the A.A.A. safety committee, … expressed great satisfaction with the promptness of a large number of motorists who immediately had necessary adjustments made and returned to the scene of the tests for the merit award.

The Springfield Automobile Club had hundreds of members in the ‘20s and ‘30s, when cars were still something of a novelty and motorists needed guidance on maintenance, safe driving habits and the rules of the road. Chief backers of the club included auto dealers and road contractors, who provided much of its funding, and the newspapers, which devoted entire pages to driving tips, touring routes and, especially, auto advertising. The club’s annual Safety Week in May was a big deal.

The nation’s first safety lane (although it wasn’t called that at the time) seems to have been sponsored by Weaver Manufacturing in its laboratory garage, 2180 S. Ninth St., in May 1927. That event – also free to any driver who brought his or her car to the garage – involved only brake and headlight tests.

The brake tests were done on Weaver Manufacturing’s drive-and-stop device, which measured the force exerted when a driver engaged a car’s brakes. The patent for that equipment was one of 100 held by Ira “I.A.” Weaver, G.E.’s brother and the company’s engineering genius.

The auto club seized on the safety-check idea and brought safety lanes to the south side of the square in the early 1930s.

The club simultaneously played a major role in development of a new Springfield traffic  ordinance and installation of the city’s first street signals. (It also issued periodic warnings against such dangers as unwary pedestrians, riding on running boards and towing children’s sleds on snowy streets.) Bengel (1886-1939), vice president of the Central Illinois Light Co. and a leader in many civic organizations, headed the auto club safety committee for much of the period.

The Springfield Automobile Club was absorbed into the Chicago Motor Club in 1938. Annual safety lanes then fell by the wayside in Springfield until 1947, when the Springfield Jaycees picked up the idea. Other organizations, including the Springfield Safety Council and some police agencies, continued to offer free auto inspections off and on until the 1970s. The inspection equipment almost always came from Weaver.

Hat tip: To Sarah Thomas of Springfield for drawing our attention to the safety lane phenomenon.

This entry was posted in Auto dealers, Business, Transportation. Bookmark the permalink.