The question of who deserves credit for designing the Illinois Statehouse has a complicated answer. 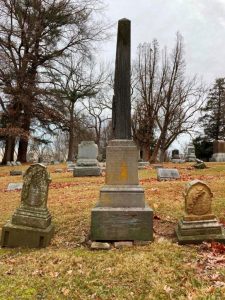 Piquenard (1826-76) was born in the Normandy region of France and studied engineering and design in Paris. He joined the Icarians, a utopian socialist movement founded by French journalist and politician Etienne Cabet that espoused principles including cooperative industry, economic equality and communal child-raising.

Cabet decided to set up a demonstration Icarian community in the U.S., picking Texas as the location. Piquenard is thought to have been one of an “advance guard” of would-be Icarian colonists who arrived in New Orleans in March 1848. The Texas colony fell through, however, so Piquenard and about 260 other Icarians moved to Nauvoo, which had been recently abandoned by the Mormons.

Piquenard returned to France briefly in 1852, but was jailed for criticizing the French president and later emperor, Louis Napoleon/Napoleon III. His father bailed him out, and Piquenard returned in 1853 to the United States, settling in St. Louis.

When the Civil War began, Piquenard first joined a Union infantry regiment as a private; by the end of the war, he had been promoted to captain and commander of “Piquenard’s Company of Pioneers,” a unit of construction engineers. 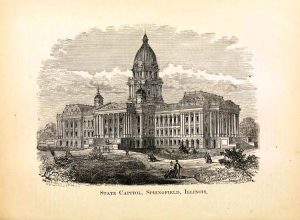 Cochrane & Garnsey drawing of proposed Illinois Statehouse; undated (and different in important details from what was finally built). Published in History of Sangamon County, Illinois, 1881.

The partnership of Cochrane and Garnsey was one of nine firms that submitted proposals to design the new Illinois Capitol in 1867. A 16-person committee – a combination of elected officials and appointed commissioners – heard their pitches that July, and Cochrane’s plan was overwhelmingly endorsed.

“(M)uch of the ensuing design work was completed by partner George Garnsey and Alfred H. Piquenard, who joined the firm in February 1868,” according to an article about the building published on SAH Archipedia, the website of the Society of Architectural Historians.

Pieces of Iowa’s Past, a guide to the Iowa Capitol, discussed the relationship between Cochrane and Piquenard in an article based on a 2009 paper by Wayne Temple, formerly with the Illinois State Archives: 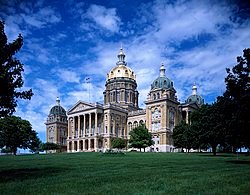 Iowa Statehouse (Pieces of Iowa’s Past)

Piquenard moved his family to Springfield in 1870 to oversee construction of Illinois’ Statehouse while also working on plans for the Iowa Capitol. Somehow, Piquenard also found time to design the David Davis Mansion in Bloomington, which was completed in 1872.

Pieces of Iowa’s Past adds:

Cochran went on to form an enterprise in Chicago. He continued his partnership in the Illinois Capitol but gave up his interest in the Iowa Capitol in 1872.

Upon acquiring both the Illinois and Iowa capitol building projects, Piquenard left for Europe to study domes and examine the newest building methods. Because Louis Napoleon was now in exile, it was safe for him to return to France.

Piquenard did not live to see either capitol completed. He died in 1876 of liver disease brought on by malaria, which he had contracted during the Civil War. In his obituary, the Illinois State Register commented:

Since the commencement of the (Illinois Statehouse) work Mr. Piquenard has been in constant supervision, and by his modesty, faithfulness, great capacity and unswerving integrity, not only held the perfect confidence of the Board of Commissioners of the new State House, but of this whole community, as well as of all who knew him, until his death. As an architect and practical builder, Mr. Piquenard had no superior in this country; and it will be difficult for the new State House commissioners to fill his place.