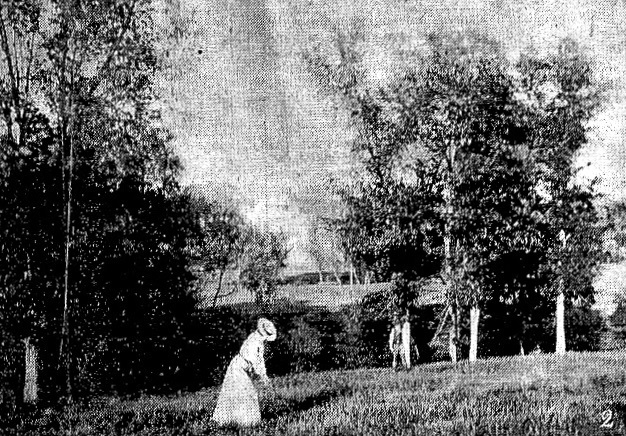 Mary Lewis lines up a shot during an 1899 women’s tournament at the Springfield Golf Club links on West Lawrence Avenue. (Courtesy State Journal-Register)

“A crowd of young society women in 1899 shocked the conventions of the day by reckless indulgence in a game called golf,” the Illinois State Journal recalled in 1931.

Most of that sentence was nonsense.

There’s no evidence anyone was shocked in 1899, nor was it “reckless” at the time for women to play golf. Women were part of the Springfield golf scene from its very beginnings. In fact, the main feature of dedication day, June 22, 1899, for the Springfield Golf Club’s new clubhouse was a mixed-foursome tournament, two men and two women in each group.

The clubhouse was built on the Springfield Golf Club’s first full nine-hole course in the 1700 block of West Lawrence Avenue, the site today of Pasfield Golf Course. 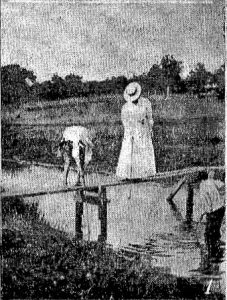 And although it was fair for the unnamed 1931 writer to call Springfield’s earliest female golfers “society women,” the fact is their male counterparts also came from the city’s most prominent families.

The Journal published its account of the “reckless” women golfers in its Centennial Edition, Nov. 8, 1931. The story accompanied a spread of five photos of a women’s golf tournament in 1899. The exact date is unknown, although the contest apparently took place very shortly after the clubhouse dedication.

The rest of the article was more straightforward, probably because it was based on an interview with the winner of that 1899 tournament, Mary Lewis (1858-1937).

The girls took a street car to the links, except Alice Bunn, who drove a little buck-board, and a few others who appropriated the family buggies. They either went home to lunch or took their own, as the club at that time did not accommodate their appetites.

Part of the costume of the woman golfer consisted of a rubber band about the waist. In making a shot, this band was pulled down to keep the skirts from blowing. Never having known comfort in dress, they did not seem to mind the tightly laced waists, long dragging skirts and high-necked shirt-waists. Many wore tucked-in middy blouses. Unlike today, the oldest and most worn clothes in the wardrobe were finished off on the links.

Clubs used were almost identical to those of the present day. With the exception of a new mid-iron Miss Sally Perkins still finds her 1899 set to be as satisfactory as ever. 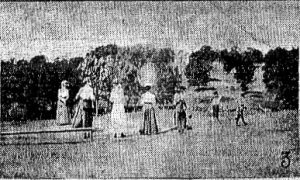 Tournaments for women were usually followed by large and enthusiastic galleries of men. After the first tournament, Miss Lewis, flushed with victory, was presented with a silver powder-box by the president of the club, Nicholas Roberts. … Miss Lewis has won a dozen or more cups in golf competitions; one of the most interesting has three handles made of goat’s horns.

Twenty-two women, almost all of them socially prominent – the Matheny, Bunn and Iles families were among those represented – played in the 1899 contest featured in the Centennial Edition.

A handful of golf enthusiasts laid out Springfield’s first golf course, of sorts, at the Illinois State Fairgrounds in 1897, according to a 1929 article by longtime Illinois State Journal sports editor Bob Drysdale.

The course was a six-hole affair, resembling the present well kept links as closely as a 1901 gas buggy resembles a luxurious sedan of today. And the ball was of gutta percha. The sound of its departure from the tee reminded one of a band of infantry at work upon the target range.

The club leased 40 acres of pasture on the south side of the 1700 block of West Lawrence Avenue from farmer Milton Wood, the Journal reported.

David Foulis of the Chicago golf club, an expert golf player, laid out the nine-hole links. He says that when the course is put in proper order no better one could be found in the country. In this course are the natural hazards consisting of creeks, ravines, ponds and knowls (sic), which are necessary to make a good golf course. The links are laid out in such a manner that in every strike it is necessary to put the ball over one of the hazards.

The Springfield Golf Club converted itself to the Illini Country Club in 1906-07 and built a new golf course and other facilities south of Washington Park. The club abandoned the Lawrence Avenue site, and paving contractor John E. Bretz moved into the house on the former course.

The land, however, was left largely unchanged. It also had never been plowed, which made it relatively easy for the Springfield Park District to take over the property and revive golf there in 1930. This time, however, the general public was allowed to play the course.