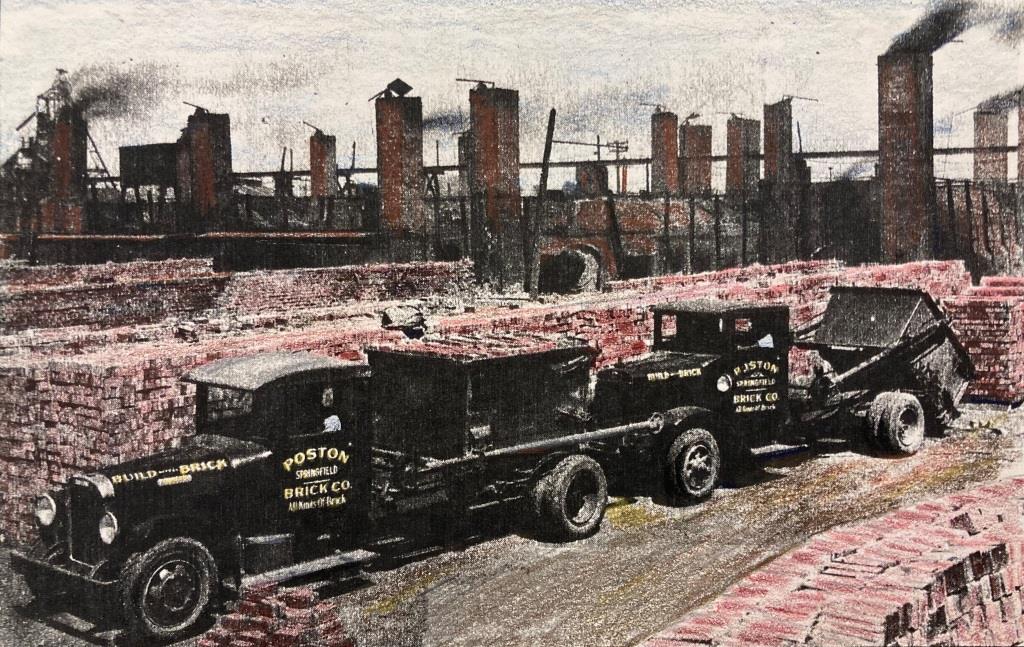 Brickyards sprouted in Springfield almost as soon as European settlers reached Sangamon County, but the longest-lived was Poston Brick & Concrete Co., which operated on South Grand Avenue for almost 60 years.

“Nature was in a most generous mood when she fashioned this section of Illinois with its clay and shale deposits of a very high character, coal and other natural resources,” the Illinois State Register said in a story about Poston in 1934.

The father and son team of Irvin G. (1854-1943) and Emmett V. Poston (1888-1964) was making bricks in Martinsville, Ind., in 1915 when they decided to expand elsewhere. Emmett Poston, according to the Register’s 1934 article, spent six months looking for the ideal combination of raw materials, water and fuel resources and transportation facilities before opening a plant 2600 South Grand Ave. E. in Springfield.

I.G. Poston largely remained in Martinsville after the Springfield plant opened. The younger Poston was president of the local company until he died; he also was active in a variety of Springfield civic and fraternal organizations. Emmett Poston is buried at Oak Ridge Cemetery.

Poston merged with the Springfield Brick Co., 2700 E. Ash St., in 1928. At the height of operations before the Great Depression, the combined company employed 225 people at both sites. (By the time of the Register story, employment was down to 100 workers at one location, Poston’s South Grand plant.)

Poston brick was used for both building construction and, until the 1930s, street paving. The firm pioneered several brick products, including rough-face brick and colorized brick, the Register said in ’34.

Due to the character of … the Springfield deposits, the Poston-Springfield brick burns red, which in itself offers an advantage in the producing of unusual color effect. The blending of clays are used under a special process of veneering, which affords the opportunity of surpassing similar plants in producing color effects. Mr. Poston created the first green color effects several years ago which marked an era in surpassing the old “red brick” used so much in Colonial days. The company has made a consistent endeavor to be leaders in the field. 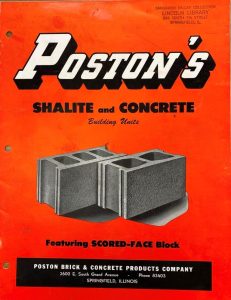 Poston began making concrete block in addition to bricks in 1938, and blocks became so important to the business that the company was renamed Poston Brick & Concrete Products Co. in 1945. In 1947, the plant was producing 100,000 face bricks and 15,000 concrete blocks daily. Poston’s employment hit its postwar height, about 150 people, in the 1950s.

By the 1970s, costs and competition had driven Poston out of the brick manufacturing business, but the company continued to distribute bricks and manufacture a variety of concrete products from its South Grand facility.

Employment fell to about 20 by 1971, and Poston Brick & Concrete went out of business a few years later. (City directories list the company through 1975, but newspaper records suggest Poston closed in 1974.) Its last president was William E. Poston (1923-99).

More information: Garnetta Cook interviewed William Poston and four former Poston Brick employees for an oral history study of the company in 1971-72. The interviews and at least one transcript (it appears not all the interviews were transcribed) are available through the Illinois Digital Archives at idaillinois.org. 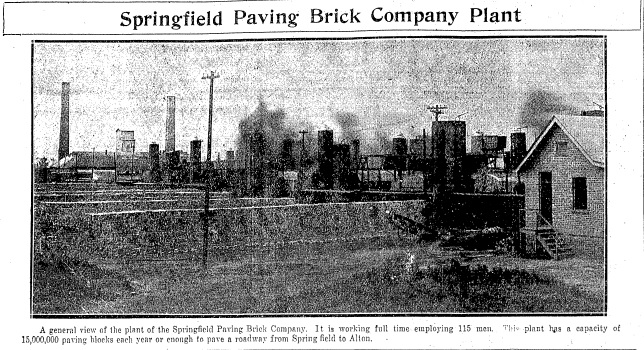 Bricks were being made in Springfield as early as 1826, less than a decade after the first European settlement in Sangamon County, according to research compiled in 2000 by brick collector James J. Rollet.

That first brick merchant Rollet found was Benjamin Nichols, whose factory operated along what today is Madison Street between First and Second streets. Nichols was followed by at least 78 other brick dealers, including Poston Brick and Springfield Paving Brick Co., the original name of Springfield Brick Co., Poston’s 1928 merger partner.

This entry was posted in Business, Industry, Soil, Uncategorized. Bookmark the permalink.