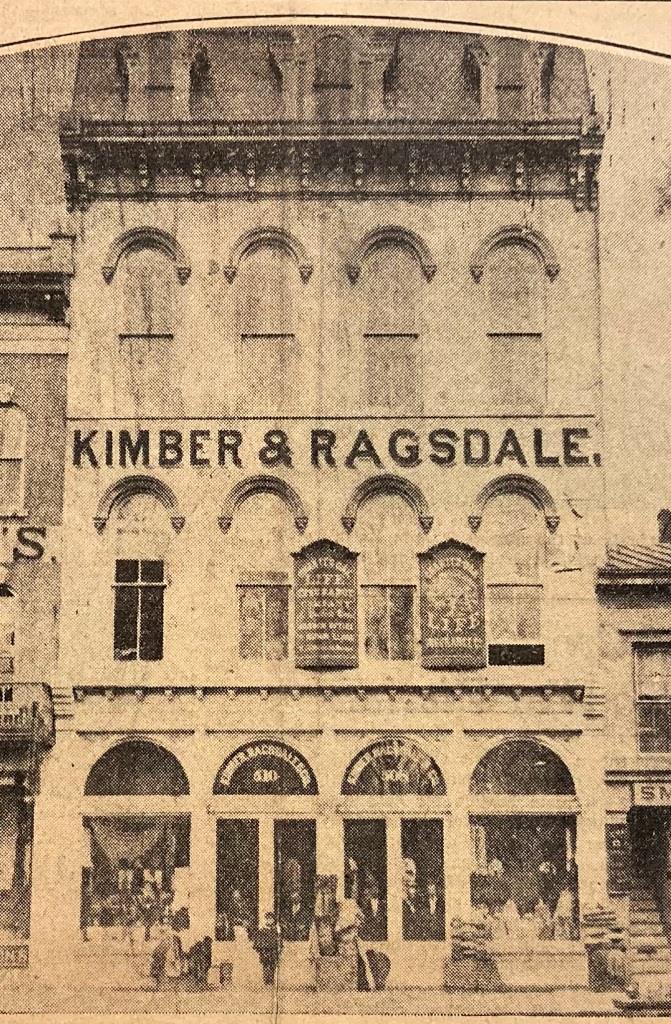 What apparently was Sangamon County’s first passenger elevator was installed at a dry-goods store, Kimber & Ragsdale, on the south side of today’s Old Capitol Plaza, in 1876.

The store announced in January 1876 that it was installing an elevator, and K&R advertisements suggest it was in operation a month later.

An Illinois State Journal roundup of local businesses on Jan. 1, 1877, described Kimber & Ragsdale’s “palatial structure” and noted it included the only passenger elevator in the city.

This spacious room is finely lighted by French plate glass windows from the front and rear, and by skylights arranged in a manner to give a good light to those selecting goods. In the center of the room is a passenger elevator, handsomely upholstered, which you step into and are quickly taken to the second floor of the building, which is devoted to their wholesale dry goods and carpet trade.

The elevator made it into K&R advertising from time to time, but only as an afterthought, which suggests it wasn’t a game-changer in the competition for local dry-goods customers.

By contrast, when the R.F. Herndon Co., which also sold dry goods and women’s apparel, included a gas-powered elevator in its new store in 1882, it drew crowds of curious patrons. Interest reportedly was so intense that an enterprising elevator boy was able – briefly, until R.F. Herndon himself heard about it – to charge five cents for a roundtrip.

Kimber & Ragsdale went out of business in 1883.

This entry was posted in Architecture, Buildings, Business, Department stores. Bookmark the permalink.