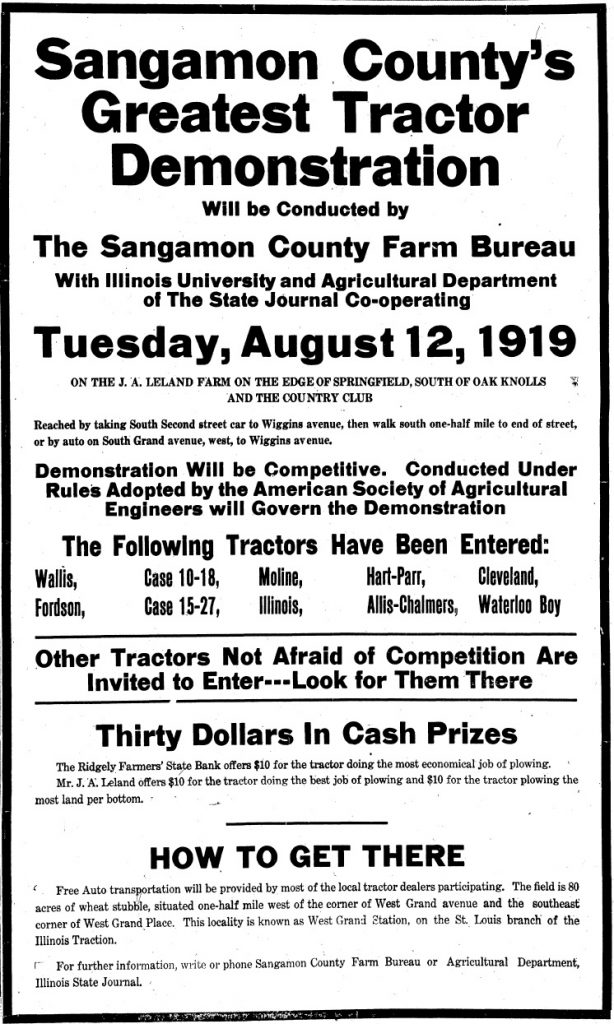 The Sangamon County Farm Bureau gave area farmers the chance to show off their newfangled tractors at the Leland farm in 1919. (Courtesy State journal-Register)

The Leland Farm, 600-some acres on what today is Springfield’s near west side, supplied the Leland Hotel with the freshest of food for decades.

The hotel operated at Sixth Street and Capitol Avenue from 1867 until 1970 (not counting a couple of years while the Leland was rebuilt following a disastrous fire in 1908).

In the 19th and early 20th centuries, much of a hotel’s reputation relied on the quality of its food, so the Leland’s original owner/managers, Horace Leland (1836-89) and Noble Bates Wiggins (1841-1901) established and owned the farm as well. The farm property generally was between South Grand and Wabash avenues, MacArthur Boulevard and Chatham Road.

The Illinois State Register described the farm in its edition of July 25, 1880.

One of the pleasantest drives about the city is the drive to the well known Leland farm, and it has become quite fashionable. Messrs. Leland and Wiggins have added improvements and adornments to the place until it is a real pleasure to visit it. It is certainly one of the best managed and most beautiful farms in this section of the country, and as everybody knows, this section of the country is widely famous for its rich and fruitful farms.

This year there were seventy acres planted in corn, forty acres in oats, fifty acres of meadow, six or seven acres in vegetables, six acres for fodder, in case the pastures are too short to feed the cattle, and seventy acres of pasture. The firm think they are justified in saying their land will produce seventy bushels of corn, thirty-five bushels of oats and about a ton and a half of hay, each to the acre planted, and about 500 bushels of potatoes in all; and there were also 400 boxes of raspberries and 200 boxes of cherries, all of which with many more went the way of all good things, to satisfy the yearnings of the inner man. There are also 2,500 grape vines heavily laden with their luscious fruit, all to be used similarly in a few weeks.

This year, and for some years past, all the vegetables in season and at the hotel are grown on the farm; hence they are always fresh and sweet, and eagerly devoured by the guests.

They bring in daily twenty gallons of unwatered milk and three gallons of cream for use at the hotel. Skim milk does not masquerade for cream; consequently every guest has the richest of cream for his coffee. At most hotels everywhere, cream is a great and special favor for which guests are devoutly grateful. At the hotels east and the “swell” hotels, it is obtained only by paying extra for it.

For table use alone, one hundred pounds of butter are used per week at the Leland hotel, seventy pounds of which are churned on the farm. The remaining thirty are bought at lesser but excellent farms, for no “patent butter” is allowed anywhere near the hotel, we are glad to be able to say, for nothing so recommends a hotel as sweet, golden butter. The butter, cream and milk are kept wholly in a Cooley creamery.

Besides all the above-mentioned, there are 200 hogs on the farm fed from the leavings of the hotel, and if one could by any stretch of his imagination see beauty in the hog, he would see it in the hogs out there; they are sleek, fat and observedly content.

Among the many improvements on the farm is a hay barn, with a capacity for holding eighty tons, which has just been erected. One one side is a shed capable of sheltering twenty-five head of cattle, of which there are many on the farm, including twenty-eight milch cows and eighteen Alderney cows. There are also about five hundred chickens to be seen running around, and also other fowls.

If there are any in the city that have not visited this farm, we advise them to do so at once. It is well worth the going, and the same attention and courtesy are shown all visitors there, as are shown all guests at the famous Leland hotel.

Owners began selling off pieces of the farm for residential development early in the 20th century. The Oak Knolls neighborhood south of Washington Park, for instance, was subdivided in 1910.

But the Leland farm continued to host major farm displays and competitions for years more. Poultry and rabbit shows were held there regularly, and the most modern farmers got to show off their tractors in a plowing competition in 1919. Some parts of the property remained agricultural until at least the 1950s.

The Leland/Wiggins mansion at 2116 Willemoore, where Noble Bates Wiggins died, was demolished in 2021.

This entry was posted in Agriculture, Business, Hotels & taverns, Restaurants. Bookmark the permalink.