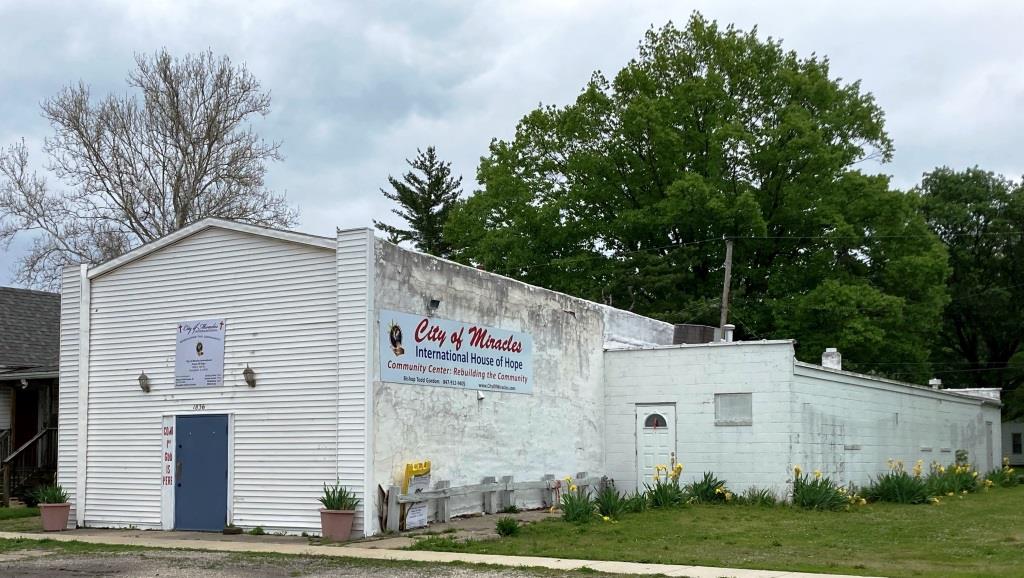 When the Palace Theatre opened at 1836 S. 15th St. in 1915, the “very pretty little house” became a venue where downtown movies were brought to Springfield’s southeast side.

Despite its grand name, the theater was very small– about the size of a modest two-bedroom home – but it served as a social outlet for a burgeoning Eastern European enclave.

An immigrant coal miner named Emanuel Wycoff (1863-1925) operated the Palace.  Wycoff’s last name originally was Wojkofka (it’s spelled Wykofka on his tombstone). He   and his family were Banat Swabians, part of a Romanian-German ethnic group tied to the larger community of Danube Swabians who lived in the neighborhood. The Wycoffs’ home was next door to the theater.

The first movie screened at the Palace was an Essanay studios production, “The Call of the Sea.”  Wycoff contracted with the General Film Company to provide the theater’s movies, which were screened only on Tuesday, Thursday and Saturday evenings, with matinees on Sunday afternoons.

One historically important movie shown at the Palace was Fox’s “The Town That Forgot God,” an expensive (for the era) production shot on location in New Jersey. What made the film expensive was that it went over schedule by a year and used special effects to show a broken dam flooding an entire town. The flood effect reportedly cost $50,000 alone– roughly $2.5 million in today’s value.

After the death of Emanuel Wycoff in 1925, the theater continued for a short time under another owner, but the Palace closed by the spring of 1927. One of the last films at the Palace was the Fox production “The Flying Horseman,” a silent western with Buck Jones, popular star of the “B western” genre.

Fitting with the tenor of the predominantly immigrant neighborhood, the theater became the home of the Workingman’s Singing Society. The society was incorporated in 1907 as Vorwärts, German for “Forward.” The society held its 40th anniversary in the former Palace Theatre building in 1947.

William Schoenfeldt, a society member and secretary of its fraternal Workingmen’s Fund, commented at the time that while the society’s membership was aging, they “still liked a good party.”  The Workingmen’s Fund was a national charity. Its Sangamon County chapter was organized in 1900.

The singing society provided music for family picnics and social events and held its own annual picnic, a grape festival and a New Year’s celebration, among other events.

Originally, the local society consisted of German men under the name männergesangverein, translated into English as “male singing society.”  Newspaper coverage prior to World War I listed the society by its German variant. 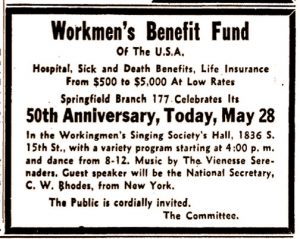 Around the 1920s, the society’s membership shifted to having more Slovenians and Austrians and fewer Germans. Evidence of its popularity is seen in a 1946 Sangamon County probate file in which Anton Osat, a Slovenian immigrant, left his estate to the singing society.

City directories indicate the singing society moved downtown during the 1940s.  The building on South 15th Street became the meeting place for the society’s women’s auxiliary, which formed in the 1920s.  A children’s “glee club” also began after World War II.

The society changed its name to the German-American Singing Society in the late 1960s, but the group went out of existence about 1981.

As of spring 2021, the former Palace Theater was occupied by a church, City of Miracles International House of Hope.

This entry was posted in Amusements, Buildings, Swabians, Theaters, Uncategorized. Bookmark the permalink.