The Lochridge brothers began as farmers, but became grocers, businessmen, investors and, for a time, bankers. In the process, they helped build the town of Pawnee.

The first Lochridges, Revolutionary War veteran Capt. John Lochridge (1761-1851) and his son William A. Lochridge (1810-77), came to the Pawnee area from Kentucky in 1835, at the beginning of the great migration to the western frontier.

The elder Lochridges were farmers in Sangamon County, as they had been in Kentucky. William’s sons, William R. (1845-1920) and John R. (1848-1905), however, started opening businesses in addition to farming. They were part of a new generation that transformed central Illinois into an urbanized industrial society. 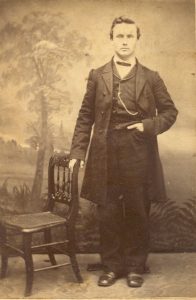 The Lochridge brothers’ business careers dovetailed with the development of the Pawnee area. They started a grocery and built the first grain elevator in Pawnee, they were two of the investors who built the independent Pawnee Railroad, and the Lochridges were among 37 people who signed petitions to incorporate Pawnee as a town. In 1890, as an outgrowth of their grocery store, the brothers founded the community’s first bank.

As Pawnee grew, the businesses prospered. In a March 1891 article about the growth of Pawnee, the Illinois State Journal mentioned the Lochridges:

The Lockridge (sic) Brothers are bankers and have one of the neatest business buildings in the country. They have been in this business about a year and are receiving the entire patronage of the country. They have capital stock of $25,000 and do a general banking business. They also handle grain and have large agricultural interest. They pay considerable attention to the livestock business, and have quite a quantity of stock on hand all the time. They are natives of Sangamon County and have an extensive acquaintance with the people. They number their friends by the hundreds in all parts of the country.

William and John Lochridge were two of many citizens who bought stock in the Pawnee Railroad, built in 1888 to connect Pawnee farmers and businesses to the St. Louis & Chicago Railroad at Glenarm.

“To the building of this road is due the wonderfully rapid growth made by the town, and the citizens are giving it a hearty support,” the Journal said in its 1891 story. “This is the only road in the United States that was built by a company of farmers, and when completed was entirely free from debt.”

In the early 1890s, the brothers’ businesses were doing well.

The grain elevator, built in 1885, remained Pawnee’s only elevator until 1896. It was one of the main reasons William and John Lochridge bought stock in the railroad and pushed for its expansion. The grain elevator also advanced their grocery business and gave them leadership roles in Pawnee.

In the 1880s, the brothers bought a grocery store founded by J.F. Smith. Using the store and the grain elevator as their base, the Lochridge Brothers laid out the Pawnee Square and located all their businesses there. 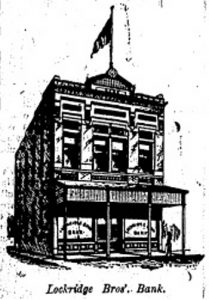 According to oral histories and the Pawnee Herald, the Lochridge brothers opened their bank because farmers would ask them to hold money for them at their grocery store. Skip Minder explained in Movin’ Down the Road: A General History of Pawnee, Illinois (2000).

Since it was quite a distance to the bank in Springfield by horse and buggy, many of the local farmers would leave money with the Lochridges to place in the safe in their store. The brothers would subsequently deposit the farmers’ money when they made a trip to a Springfield bank, or, the farmers would leave it at the store as sort of a drawing account so they could get money when they needed it. These actions prompted the Lochridge Brothers to think about starting a bank in Pawnee.

Thus the Lochridge brothers opened the first bank in Pawnee in 1890 at Fourth and Washington streets. The brothers already owned most of the land and businesses in downtown Pawnee, so the Lochridge Brothers Bank completed the Pawnee square. The bank building, a three-story brick structure, was the only building that survived a fire that swept the square in 1901. It still stood in 2021.

The bank itself, however, folded in 1897, the victim of unpaid loans and the financial Panic of 1893, which drove down commodity prices. The Lochridges routinely loaned money to area farmers, money the bank itself had borrowed from bigger banks in Chicago and Springfield. When crop prices fell, farmers couldn’t pay their debts, and the Lochridge Brothers Bank, in turn, could no longer pay its creditors. The bank was forced to declare bankruptcy. 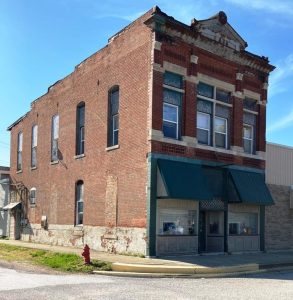 The Sangamon County Court bankruptcy file for the Lochridge brothers, dated March 1897, recorded the personal property of John R. and William R. Lochridge, including the bank. The list of William Lochridge’s possessions gives a sense of the status the brothers held in their community. According to the case file, he owned “four head of horses, three cows, thirty-five hogs, one two-horse carriage and harness, one single buggy and harness, and eleven shares of stock of the Pawnee Railroad.”

Bankruptcy did not end the Pawnee community’s respect for the Lochridge brothers. John and William still owned their grocery store and grain elevator at their deaths in 1905 and 1920, respectively, although they themselves had moved to Springfield.

William Lochridge opened a boarding house on South Sixth Street in Springfield. He also managed the Hotel Normandie, 311-15 S. Fourth St., from 1900 until 1912. John Lochridge, who was a grain and livestock broker in Springfield, was a resident of the Normandie when he died.

Without the migration of farming families seeking new opportunities in the Midwest, there would not have been the growth of the United States economy or the shape of a new Midwestern identity. Even though the Lochridge family no longer resides in Pawnee, their legacy lives on in their descendants and in the Pawnee community.