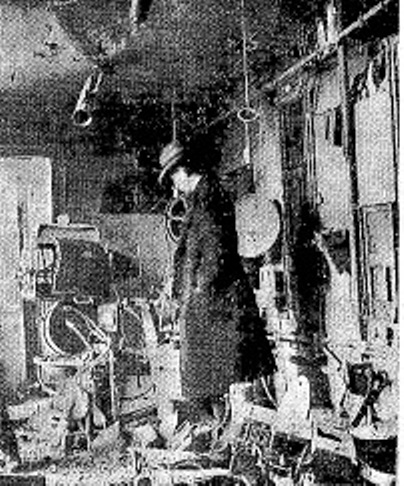 Unhappy theater workers were the immediate suspects in 1931, when bombs – both explosives and stink bombs – went off in three local cinemas. A few months later, another bomb wrecked the home of a theater manager.

Members of Springfield Local 323 of the Moving Picture Operators union went on strike in fall 1931 against the Strand, Senate and Savoy theaters, operated by the Kerasotes family, and the Capitol theater, owned by Leo Burnstine. The issues were separate. Kerasotes had laid off a janitor who belonged to the Stage Employees union, and the operators group walked out in sympathy. Burnstine refused union demands that two projectionists be on duty whenever a movie was shown.

No one was hurt in any of the bombings, which took place early in the Great Depression, a tumultuous period for labor relations in Springfield. Bombs were a regular feature, for instance, of the central Illinois mine union war of 1932-35.  Chicago’s theater industry also was rocked by labor violence during the same period; at least one person was killed there.  By comparison, the Springfield movie dispute was minor.

Burnstine didn’t even report the first incident in the campaign. A night watchman found two sticks of dynamite in the Capitol theater, 613 E. Washington St., in mid-September, the Illinois State Journal reported.

The dynamite was placed then, Burnstine believes, more as a warning than anything else.

This was not officially reported to police, Burnstine said, because “in all the trouble we’ve had, Police Chief (Carl) Nuess has failed to give me any satisfaction. He even refused to see me on one occasion when I went to his office.”

An earlier controversy apparently had convinced Burnstine city police were on the union’s side. The movie operators began picketing the theater at the start of the strike, so Burnstine hired his own picket, a woman, to give the theater’s side of the argument.

City police arrested the woman and held her for seven hours, the Journal said. She was released “only on the condition that she be taken off the street,” Burnstine told the newspaper. “The union picket was allowed to remain in front of the theater.”

The warning bomb wasn’t made public for several weeks, coming to light only after a second bomb was planted at the Capitol. This one did explode, doing $1,000 damage. The bomb, apparently timed to avoid casualties, blew up on the building’s roof about 3:15 a.m. Sept. 27, 1931.

The movie operators won an injunction against the union in October. Judge Charles Briggle ordered theater unions not to interfere with business at the four theaters, which continued to operate with independent projectionists. The order directed the unions not to picket the theaters or organize boycotts. It also specifically warned against setting off “stench bombs” in the theaters.

Nonetheless, on Nov. 8, stink bombs were set off in two Kerasotes theaters, the Senate in the 500 block of East Monroe Street and the Strand in the 600 block of East Washington Street. Flora Kerasotes, whose husband Gus managed the Strand, nabbed the bomber there. He was identified as John P. Manning. According to the Journal:

(Flora Kerasotes) said that she saw Manning throw something upon the floor and she detected the odor of a bomb. She seized the man and with the help of employees … seized him until the arrival of Sheriff Sam T. Metcalf. …

About 9 o’clock, an hour after the trouble at the Strand, several hundred persons were driven from the Senate theatre by a stench bomb. The person who placed the bomb escaped.

At the Strand on Dec. 7, a blast destroyed the theater’s projection room, causing about $10,000 damage. The bomber again timed the explosion for when no one would be in the building.

The bomb, exploding at 3:20 o’clock yesterday morning, shattered the entire projection room machinery and sound apparatus. So powerful was the blast that windows in the upper floors of the theatre were shattered and the detonation was heard throughout the city. The shock caused nearby buildings to tremble. …

From all indications the bomb was encased in a sawdust filled box. The bomb, police believe, was set off by a long fuse that gave the bombers ample time to leave the building before the blast. 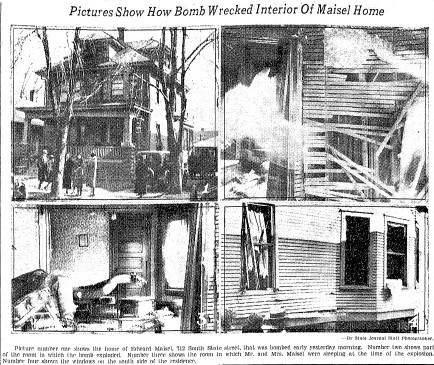 The most dangerous of the series of bombings took place on Feb. 24, 1932, when someone threw a bomb through the window of a home at 712 S. State St. occupied by the family of Edward Maisel. Maisel was an operator at the Strand and previously managed other local movie houses. The bomber struck about 12:40 a.m.

“The interior of Maisel’s eight-room home was wrecked,” the Journal reported.

The bomb was tossed through a window in the front parlor. It blew a hole in the floor, breaking supporting beams. Walls nearby were shattered and plaster throughout the house fell. Furniture and knick-knacks were damaged.

Maisel and his wife Onezma were in their bedroom next to the parlor, and their 12-year-old son was sleeping in the room just upstairs. Again, however, no one was injured. Maisel said he had received no threats.

Local 323 secretary W.E. Bryner said the union had no role in any of the violence. “Should any member of the union be found to be implicated, he immediately would be expelled,” he said.

Police questioned two suspects after Onezma Maisel tentatively identified one of the men as a stranger who asked her after the bombing if anyone had been hurt.

That man, Carl Franks (alias Oliver Winters), and an alleged partner, Edward Harris, had been arrested in Effingham in December. At the time, besides the Springfield theater bombings, they were suspected of setting off a September blast at the Firestone tire shop, 409-17 S. Sixth St., which was being built by non-union labor, and of a couple attempted safe burglaries.

Police came up short on evidence, the Journal said.

Unable to connect the men with the local bombings despite the finding of several sticks of dynamite in their rooms in this city, the men were sentenced to six months in the county jail on vagrancy charges.

After serving twenty-five days, the men were released upon recommendation of Chief of Detectives C.W. Jesberg. Since their release two bombings have occurred in Effingham and the Maisel home in this city was bombed.

Franks and Harris were never charged in the Maisel case, however, and none of the bombings – with the exception of Manning’s involvement in the stink bomb at the Strand – were ever solved.

Edward H. Maisel (1894-1968) was no stranger to violence beyond what was projected on the movie screens he operated. 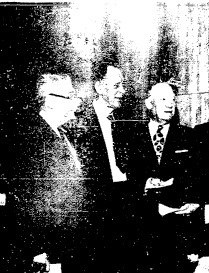 On Oct. 5, 1924, Maisel shot to death one of two men who attempted to rob him as he was driving home after work at the Princess Theatre, Fifth Street and Capitol Avenue.

Two “well-dressed men” driving a big auto pulled alongside Maisel’s car in the 1300 block of East Washington Street, according to the Journal.

One of the pair jumped on the running board of Maisel’s auto with drawn revolver and ordered him to stop. Maisel replied by drawing a revolver and firing pointblank at the bandit, knocking him into the street. The second highwayman fired at Maisel, the bullet striking him in the leg.

The second bandit stopped his car, picked up his wounded comrade, who lay in the street in a pool of blood, and speeded away.

Maisel, who wasn’t seriously hurt, told police he thought he had killed the first robber. He was right. A passerby found the badly decomposed body of George Fowler of Kansas City near the Chinkapin Bridge northwest of Springfield a month later.

Maisel was still managing the Princess in 1928, when he foiled another would-be armed robber. That incident gave the Journal another colorful story.

Maisel told police that he was in the box office of the theatre and had just counted the money taken in during the evening when he noticed the man. All of the patrons had left the theatre. He said he threw the money into a small office safe in the box office and as he looked up he saw the gun pointed at him.

Maisel … said he grabbed for the man’s weapon as he was ordered to stick up his hands. His own revolver was in a drawer and it was impossible for him to get it, he said.

“As I grabbed for the revolver,” he said, “the man stepped back and fired the bullet, hitting the floor. I lost my balance and tripped over the safe door, which was standing open, and the man, jerking himself free, turned and fled. He ran south on Fifth street and disappeared in the lawn of the governor’s mansion. A man who followed him in a car as he ran down the street told me he saw him lying down in the lawn trying to hide himself in the shrubbery.”

Evidently the holdup man is a newcomer to Springfield, police deduced, since he did not know that Ed Maisel is a bad man to tackle with a gun. Every crook has given him a wide berth since the attempted Washington Street stickup three years ago.

Maisel was still working for Kerasotes when the chain celebrated its 50th anniversary in 1959. He is buried in St. Petersburg, Fla.