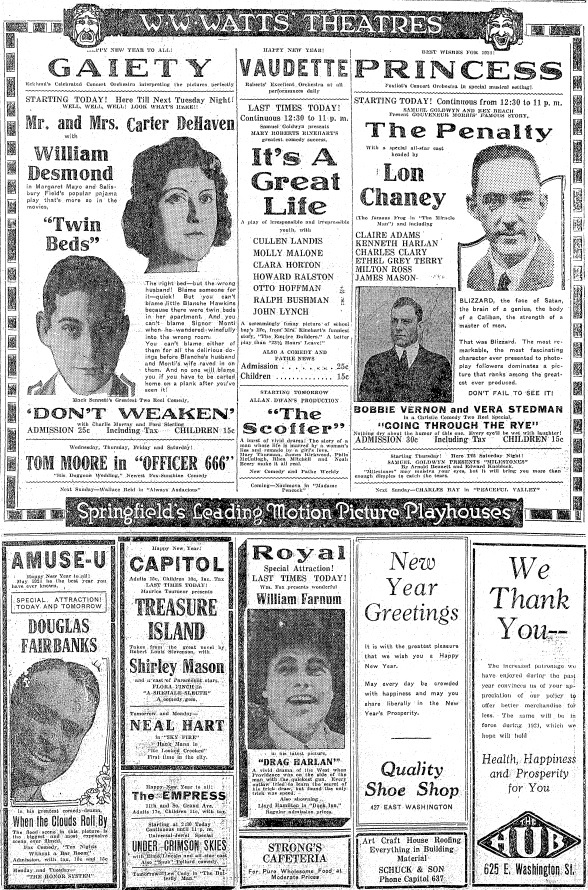 If they could get to them despite unpaved streets and unreliable street cars, local residents had plenty of amusement opportunities in 1921. (Ads from the Jan. 1, 1921 Illinois State Journal, courtesy State Journal-Register)

What was on the minds of Sangamon County residents for New Year’s 1921? Potholes.

For its special New Year’s coverage on Sunday, Jan. 2, 1921, the Illinois State Journal asked 47 “prominent citizens” (not surprisingly for the time, all were white, and all but one were men) “What Do You Wish for Springfield?”

Some of the responses were generic. “Prosperity,” said Enest Helmle, president of the Commercial Trust & Savings Bank, “because from it we derive the greatest amount of happiness for the greatest number of people. I could wish nothing better.”

When it came to specifics, however, the most common recommendation, made by 18 of the 47, was that both the city and county improve their street systems.

“Outsiders get a bad opinion of Springfield by reason of the condition of its paved streets,” said assistant attorney general Noah Bainum.

“I don’t own an automobile,” Springfield police plainclothesman Jack Walsh said, “but Springfield could use to a good advantage a few new pavements on the most prominent streets. It would be great.”

Sangamon County Clerk Charles Byers extended that idea. “My wish is to see Springfield connected with the county line by good, oiled roads wherever the main roads are not paved.”

William Boys, director of the Illinois Department of Trade and Commerce, agreed. “(A) connection between the city pavements and the country hard roads would be of great benefit.”

Another half-dozen respondents hoped for settlement of an ongoing controversy between the city electric department, headed by Willis Spaulding, and local private utilities.  A couple thought Springfield should have a memorial building dedicated to those killed during World War I. Housing and health care both got multiple mentions. And several people called for consolidation of railroads through the city – a wish that remained unfulfilled a century later.

But some of those polled had particularly personal hopes for the new year. George Pehlman, day desk sergeant at the Springfield Police Department, wanted a pay raise for officers. Hazel Martin, state nurse at the St. John’s Hospital dispensary, the only woman interviewed, complained that street cars were few and far between on the Governor Street line.

David Conwill, who operated the police department’s telephone switchboard – apparently one Journal reporter talked to everybody he ran into at the police station – was grumpy about Prohibition, which was less than a year old in January 1921.

My wish for 1921 is that light wines and beer be allowed the people of the country, which includes Springfield. They would be a good thing and would, I am sure, be a remedy for the decided unrestful conditions in the United States.

City Clerk Robert Moore may have been of the same mind, although he was carefully vague about his wishes for 1921. “Plenty of good cheer for everybody,” he answered, “if you know what I mean, and don’t be too sure that you do, for I mean something else.”

Earl Shoafe, a waiter at the Ballard-Johnston Restaurant, 426 E. Monroe St., was direct: “Put the loafers to work.”

“If wishes were horses, then beggars could ride,” Lemon said. “Springfield needs many things, like all other cities do. I think I’ll hold my wish for another year.”