Courting and marriage in early Illinois

Speaking to the 1873 meeting of the Old Settlers of Sangamon County, former Gov. John Palmer remembered the process of courting and marriage when he arrived in Illinois in the 1830s. From the 1881 History of Sangamon County; together with its cities, villages and towns.

“In those days when a young couple married, the neighbors turned out to make boards for the house, and puncheon floors were put down. Still the couples were happy, as happy as couples are now. Now when a young couple marry, the carpenters come, and the upholsterers, and prepare the house, and thousands of dollars are spent in fixing it, and often with regret that there was no more money to spend. 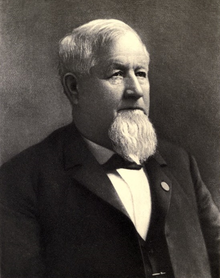 “I recollect attending a wedding party when I was quite a young man. There was no band, but instead, the real old-fashioned orthodox fiddle. After dancing all night, my feet were quite sore in the morning, but I had enjoyed myself. The reason my feet were sore was because I danced in my bare feet; but my partner did the same. There was a story told about finding toenails upon the floor (it was a puncheon floor), but I didn’t believe the story.

“You young ladies and gentlemen have ideas about social pleasures that we knew nothing about. You have carriages; and coming here today I noticed one young lady and gentleman riding on horseback, but they had two horses. We didn’t do that way, one horse only being used, and the girl was taken up behind.

“I well recollect the pleasantest ride I ever had in my life. I had the finest horse, but as the saying was, it was a ‘borred one.’ I took the girl to church, seven miles, and she rode behind me. I felt ticklish and bashful and so was she, and she could hardly take hold of me at first to hold on, but she got used to it, as, nearing the church, she found others mounted the same way.

“There was always a strife as to who had the prettiest girl and the best horse, but I always thought I was ahead in that respect. Now we couldn’t ride double, as the lady is even larger than myself, and I am no pigmy, and we couldn’t get a horse to carry us. But now let a gentleman ask a young lady to ride, and she will say, ‘Where is the buggy?’ I didn’t know what a buggy was then.”

When he could afford a horsedrawn gig, Palmer said, “I was so proud that I got my wife a new dress that cost $4.50, and there was seven yards of goods in it.”

Referring to the arduous duties of the pioneer wives, to whom he paid a glorious tribute, the Governor related an anecdote of a woman returning to Tennessee, who declared that “Illinois was a good place for men and horses, but the devil on women and oxen.”