Thousands of Sangamon Countians once turned out for the annual reunions of the county’s Old Settlers Society. The events featured games, lavish picnics, speechifying and recognition of some of the county’s earliest residents.

The organization began with an appeal in the May 28, 1859, Illinois State Journal. Signed by 61 men, including Abraham Lincoln, the notice called for an Old Settlers Convention.

The undersigned, desirous of preserving the early history of the City of Springfield and Sangamon county, now known to a great degree only to a few “Pioneers,” would suggest a meeting at the Court House on the 1st of June, of all surviving settlers who became residents of the county previous to the “winter of the deep snow” (1830-31) for the purpose of organizing a permanent society in furtherance of this object.

Planning moved quickly. A constitution was written and officers elected at the first annual celebration of Old Settlers’ Day, held Oct. 20, 1859, on the site of the cabin where Robert Pulliam – considered the county’s first European resident – spent the winter of 1817-18.  The Journal reported on the gathering two days later.

The weather was gloriously fine, the day being a sample of most delightful “Indian Summer,” and the number of persons brought together on the occasion could not, we think, have been less than fifteen hundred. Among them we noticed and had the pleasure of much interesting conversation with many of the early Pioneers into the “Sangamo Country.”

Pascal P. Enos, who several accounts say originated the idea of the Old Settlers Society, was elected recording secretary at the meeting. He closed the day with a call for the early pioneers to record their experiences  similar get-togethers in the future. “(S)uch memories now might seem unimportant or trivial,” the Journal summarized his speech, “but to the future historian they would be invaluable.”

“We trust this will not be the last reunion of this kind,” the Journal concluded.

The Civil War, however, erupted only a few months later, so the Old Settlers’ next meeting wasn’t held until August 1868 at Clear Lake. That reunion began the tradition of annual meetings held at various locations around the county.

Although the call for formation of the society had suggested it would be open only to people who had arrived in Sangamon County before 1830-31, that first meeting voted to open membership to anyone who had been a resident of the county for 25 years. However, Old Settlers get-togethers for decades included recognition ceremonies for any remaining “snow birds,” people who had survived the Deep Snow.

Mainstays of the society for most of its existence were pharmacist Roland W. Diller and his son Isaac, who served terms as president and secretary for a total of 60 years. 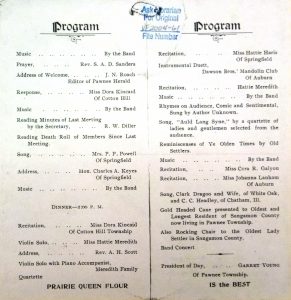 The Old Settlers Society may have reached its peak with the 1900 gathering. Somewhere above 7,000 people were estimated to attend that reunion, held at Sanders’ Grove east of Pawnee. Official highlights included a replica log cabin, music by the Auburn Merchants Band and Dawson Brothers Mandolin Club, and the keynote speech by lawyer and politician Charles Keyes.

Unofficial highlights, according to the Illinois State Register, included a variety of thinly disguised alcoholic drinks and children with tin whistles.

There were refreshment booths in abundance, some selling what they called lemonade and some selling lemonade. Some sold orange cider, so they said, although there was little evidence of oranges ever having been used in the make-up of the liquid. Peanuts and popcorn was there in huge quantities, and the little whistle which creates so much disturbance was also there. They were used freely in the vicinity of the stand where the programme was rendered and there were times when they came near causing some singer to get on the wrong pitch and thus ruined a good song. But the little folks enjoyed the whistle and they did not care much about the music.

A group of gamblers also set up on the grounds, briefly. They apparently had told organizers every participant in their games would receive a prize, “but it soon became known that the games were nothing less than roulette wheels on a small scale,” the Register reported. “(I)t took … but a very few seconds to close them up and send them out of the grounds.”

As Old Settlers secretary, Roland Diller was assigned to read out the list of members who had died since the 1899 meeting, “but he flatly told the audience he would not do it,” the Register said. “He said it was too long and if they wanted to see it they could read it themselves.” (The list included 165 names.)

By the 1920s, the number of pioneers on the roll of the deceased had grown to more than 300 annually. That attrition contributed to the Old Settlers Society deciding in 1921 to associate its annual meetings with those of the Sangamon County Farm Bureau. For most of the next two decades, the Old Settlers would hold their program in the morning and the Farm Bureau took over in the afternoon.

The last Old Settlers’ picnic – the 76th – was held at Caldwell’s Grove north of Chatham on Aug. 26, 1942. Illinois State Journal reporter Beulah Gordon wrote that among the speakers was Isaac Diller, who told a story about his father.

“He owned the first double-barreled shotgun in the community and shot a deer where Bunn park is now located,” Diller said. “Folks laughed at his ‘scatter gun’ until he proved how well it worked.”

The board of the society continued to meet annually through 1948 to elect officers. The last Old Settlers president was David W. Cobb (1858-1950), a great-grandson of Springfield pioneer John Kelly; elected in 1945, Cobb was still president at his death. He apparently was never replaced.

Roland W. Diller (1822-1905) was president of the Old Settlers Society from 1879 to 1882 and then was elected secretary, a post he still held when he died. Diller, who arrived in Springfield in December 1844, is best known as a pharmacist and  close friend of Abraham Lincoln. 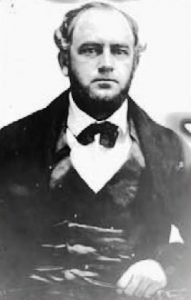 The Corneau & Diller drug store, across Sixth Street from what is now the Old State Capitol, “was for many years a gathering point for Springfield’s politicians and intellectuals, including Abraham Lincoln, who became a close friend of Abraham Lincoln,” James T. Hickey wrote in the Spring 1984 edition of the Journal of the Illinois State Historical Society.

The Dillers lived near the Lincolns, and Roland Diller sometimes told a well-known story about Lincoln and his sons.

“I was called to the door one day by the cries of children in the street, and there was Mr. Lincoln, striding by with two of his boys, both of whom were wailing aloud.

“‘Just what’s the matter with the whole world,’ Lincoln replied. ‘I’ve got three walnuts, and each wants two.’”

Isaac R. Diller (1854-1943) succeeded his father as Old Settlers secretary and, except for a couple of years in the early 1900s, held that post until 1942, when he was elected the society’s president.

Isaac Diller, a playmate of the Lincoln boys, worked with his father at the pharmacy until 1901, when he sold the business to become a real estate and insurance broker. Isaac Diller also was active with the YMCA, the Presbyterian Church and the Sons of the American Revolution.