Boy Scouts lined up outside the Statehouse following the parade for a panoramic photo. (Courtesy Mark Blough)

Boys’ Week 1922 culminated May 5 with a mile-long parade through downtown Springfield. Boy Scouts, who had “governed” the city the entire week before, led the march, which also involved non-Scouts from every local school, public and private, joined by their fathers, members of civic clubs and fraternal groups, and half of Springfield’s mail carriers.

Three bands – the Watch Company Band, the Capital City Band and the Greater Springfield Band (“colored,” the Illinois State Register noted in its coverage) accompanied the procession, along with the Boy Scouts drum and bugle corps. The Boys’ Week parade, the Illinois State Register said, was the largest in Springfield since the giant World War I homecoming celebration on June 24, 1919.

Girls and women were relegated to watching from the curb. 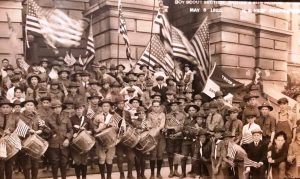 Detail from panorama shows some members of Scout drum and bugle corps.

The 1920s were the heyday of Boys’ Week, a nationwide program initiated by Rotary Clubs in New York City in 1920. The idea was “an effort to promote youth development in education, citizenship, health and hygiene and vocation,” according to a Rotary history of the event. Boys’ Week, held nationally every year, became Youth Week in 1934 and Boys’ and Girls’ Week in 1936.

Springfield, however, observed the week only sporadically. The next Boys’ Week here, in 1925, lasted only three days. Scouts got another chance to govern the city in 1926, but this time, their administration lasted only a half-hour. Nothing on the scale of the 1922 parade was attempted again, and Boys’ Week seems to have petered out in Springfield after 1927.

The panorama photo of Boy Scouts in front of the Statehouse above was taken by Harry Neef (1878-1951), whose panoramic camera was a major selling point of his Neef Photo Studio, 111½ N. Fifth St.  A 1918 newspaper ad boasted:

Neef makes a specialty of large groups. He has a panorama camera, one of the very few of its kind in central Illinois, which is especially designed for outdoor scenes and which insures success with this kind of work. Neef, however, is equally successful with interior work and the photos he has taken of decorated rooms, banquet scenes, state settings and large audiences rank high in the field of art. Many of these photos are taken by flashlight, a field in which Neef excels.

Hat tip: To Mark Blough, who found the original photo at a resale shop in Taylorville and brought it, and Boys’ Week, to the attention of SangamonLink.