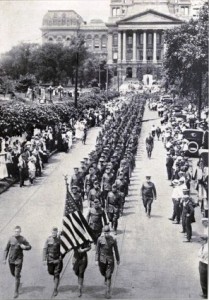 Black soldiers marched in the parade, but, in keeping with times, African-Americans were not allowed to mix with whites during the rest of the festivities.

“The colored service men, who had turned out of the parade after it passed the reviewing stand, were banqueted and feted in the Arsenal, where they enjoyed dancing in the evening,” Duff wrote. “And nothing was spared to give them the ‘Welcome’ which their splendid record as fighters deserved.”