In his later years, Maj. Bluford Wilson was a railroad lawyer in Springfield. His spare time was consumed with church work, politics and, apparently, cultivating a luxuriant mustache. But as a young man, Wilson helped break up the Whiskey Ring, the worst of the many scandals that plagued the presidential administration of U.S. Grant. 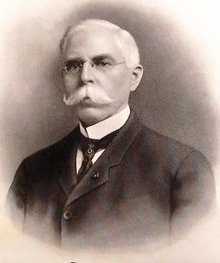 Wilson (1841-1924) was born near Shawneetown in southern Illinois and financed his college education by helping run his family’s Shawneetown ferry. He enlisted in the Union Army in 1862 and served in the Vicksburg campaign, including the battles of Champion Hills, Black River and the siege of Vicksburg. He was promoted to major for gallantry in the Battle of Spanish Fort, one of the last battles of the war.

Wilson got his law degree following the war. Presumably with the help of his brother James, who had been on Grant’s staff during the war, Wilson was named U.S. attorney for the Springfield-based southern district of Illinois in 1869. After Grant’s re-election in 1872, Bluford Wilson was appointed solicitor of the U.S. Treasury in Washington, D.C.

The Whiskey Ring scandal involved distillers who bribed Treasury Department agents to help them evade the federal liquor tax of 70 cents a gallon. The agents would neglect to collect the tax and then split the illegal gains with the distillers. It was a complicated fraud, involving distillers, rectifiers, gaugers, storekeepers, revenue agents, and Treasury clerks, and an expensive one, costing the Treasury $2 million or so a year. Some of Grant’s top aides, including his personal secretary, Orville Babcock, profited from the proceeds of the ring.

Without telling Grant or his attorney general, Wilson and U.S. Treasurer Benjamin Bristow hired private investigators to infiltrate the conspiracy. On May 10, 1875, the agents conducted raids across the country that exposed the ring. More than 200 people ultimately were indicted, and 110 of them convicted. The government recovered $3 million in whiskey taxes.

Grant wasn’t personally implicated in the investigation, but he did step in to protect Babcock, who was acquitted of the charges against him. Wilson and Bristow objected to Grant’s interference, and both men resigned from the Treasury after Babcock’s acquittal. Grant probably would have fired them anyway, but in testimony before a congressional committee in 1876, Wilson downplayed his final differences with Grant.

The conversation between the President and myself was a brief one. The President received me coldly. I said to him: “I have called to inform you that I have received such offers for professional business as to induce me to vacate the office of solicitor of the Treasury. I do this by the advice of friends, and also for the reason that I wish to put an end to the embarrassment and annoyances to which you are subjected on my account. The President said, “Very well.” … I replied, “I hope that during the remainder of your Administration you will have peace and quiet,” and with the assurances of my respectful and kindly consideration, I took my hat and left him.

The “professional business” Wilson referred to involved his and his brother’s investments in development of railroads in southern Illinois. Wilson bought a home in hte 900 block of South Sixth Street – it’s now part of the Butler Funeral Homes complex – and he and his wife Alice became the parents of five children. (One of their sons, Arthur “Jingle” Wilson, was a champion polo player and Medal of Honor awardee during the Philippine Insurgency).

In a page-one obituary, the Illinois State Journal said Bluford Wilson “was best known as a corporation lawyer and a practitioner in the United States courts.” He was general counsel of the Chicago, Peoria & St. Louis Railroad and the Illinois Southern railway and a former vice president of the Illinois Power Co., which at the time owned Springfield’s gas, electric, heating and street-car utilities.

In 1888, Wilson was among 32 founders of Christ Episcopal Church at Sixth and Jackson streets. The group was disenchanted with the style of services at St. Paul’s Episcopal Church, according to a 1988 State Journal-Register article on Christ Church’s 100th anniversary.

“The parish got started because the people at the Cathedral didn’t like the ceremony, smoke and bells” at St. Paul’s, the Rev. Hobart Heistand, Christ Church’s pastor, told SJ-R writer Elizabeth Bettendorf. Wilson held a variety of local, regional and national positions with the Episcopal Church over the next several decades.

“In political affiliations,” the Journal said in its obituary, “Mr. Wilson was closely identified with the interests of the Republican party since its inception, with the one exception of his difference of opinion in the year 1892, when he cast his ballot for Grover Cleveland.” (Wilson objected to the Republican Party’s preference for high tariffs.)

As for the mustache? Jack Butler, then the owner of Butler Funeral Homes, in 1994 gave the spirit of Bluford Wilson some of the credit for Butler’s own dapper appearance.

“He was famous in Springfield for his handlebar mustache and his impeccable appearance,” Butler told SJ-R reporter Mike Matulis.

This entry was posted in Business, Churches, Prominent figures, Railroads. Bookmark the permalink.