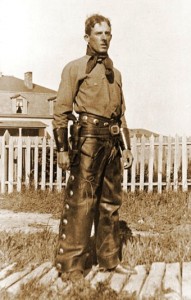 U.S. Army 2nd Lt. Arthur H. “Jingle” Wilson (1881-1953), a native of Springfield, was awarded the Medal of Honor for service on Patian Island in the Philippines on July 4, 1909. Wilson, who spent  nearly 40 years as a cavalry officer, also was a fine horseman, a top polo player, and a colorful soldier.

While in action against hostile Moros, when, it being necessary to secure a mountain gun in position by rope and tackle, voluntarily with the assistance of an enlisted man, carried the rope forward and fastened it, being all the time under heavy fire of the enemy at short range.

During the fight, Wilson was cut in the neck by a Filipino wielding a barong — a thick, single-edge sword — which severed all the muscles on one side of his neck. However, he remained in the Army, retiring as a colonel and commander of Fort Brown, Texas, in 1942.

Wilson also continued to ride horses, despite being warned of the increased possibility of severe injury if he fell.

After Wilson’s death, Stanley Koch, who apparently was well acquainted with Wilson, wrote an affectionate memoir for the West Point Memorial Page:

Jingle started his military career with the Class of 1903 but, never being of the studious type, was turned back and graduated with the Class of 1904. While a cadet, as throughout his entire life, his main interest and pleasure were with horses. He was a member of the cadet polo team and on every special riding squad.

On graduation, of course, he wanted the Cavalry. His class rank landed him in the infantry, but he didn’t give up. Aided by a thousand-dollar bonus, he found a cavalry lieutenant who was willing to exchange his yellow stripes for the white of the infantry and joined the 6th Cavalry at Fort Meade, South Dakota.

In those days the quarters at that post had large back yards, and Jingle soon had his yard filled with ponies. With two or three of his classmates who had similar tastes, they would assemble a herd of a dozen or so ponies and ride the country at a high run, herding the remuda ahead of them, roping and saddling fresh ponies every few miles.

Jingle was an unusually fine revolver shot but did not believe in limiting his practice to the target range. He lived on the lower floor of a large double set of quarters, with his captain and family occupying the upper floor. There was a long hall downstairs, where a filled wood box at the end made a splendid backstop for Jingle’s target. However, his captain finally had to persuade him that a 45-caliber revolver was not a suitable weapon tor indoor practice.

“I doubt if any officer … will ever forget his graceful appearance on a horse,” Koch wrote. “He was one of the best and easiest riders, and certainly the most graceful man on a horse in the cavalry.”

Wilson lived in Texas after his Army retirement and died while duck hunting, another of his passions. He is buried at Oak Ridge Cemetery.