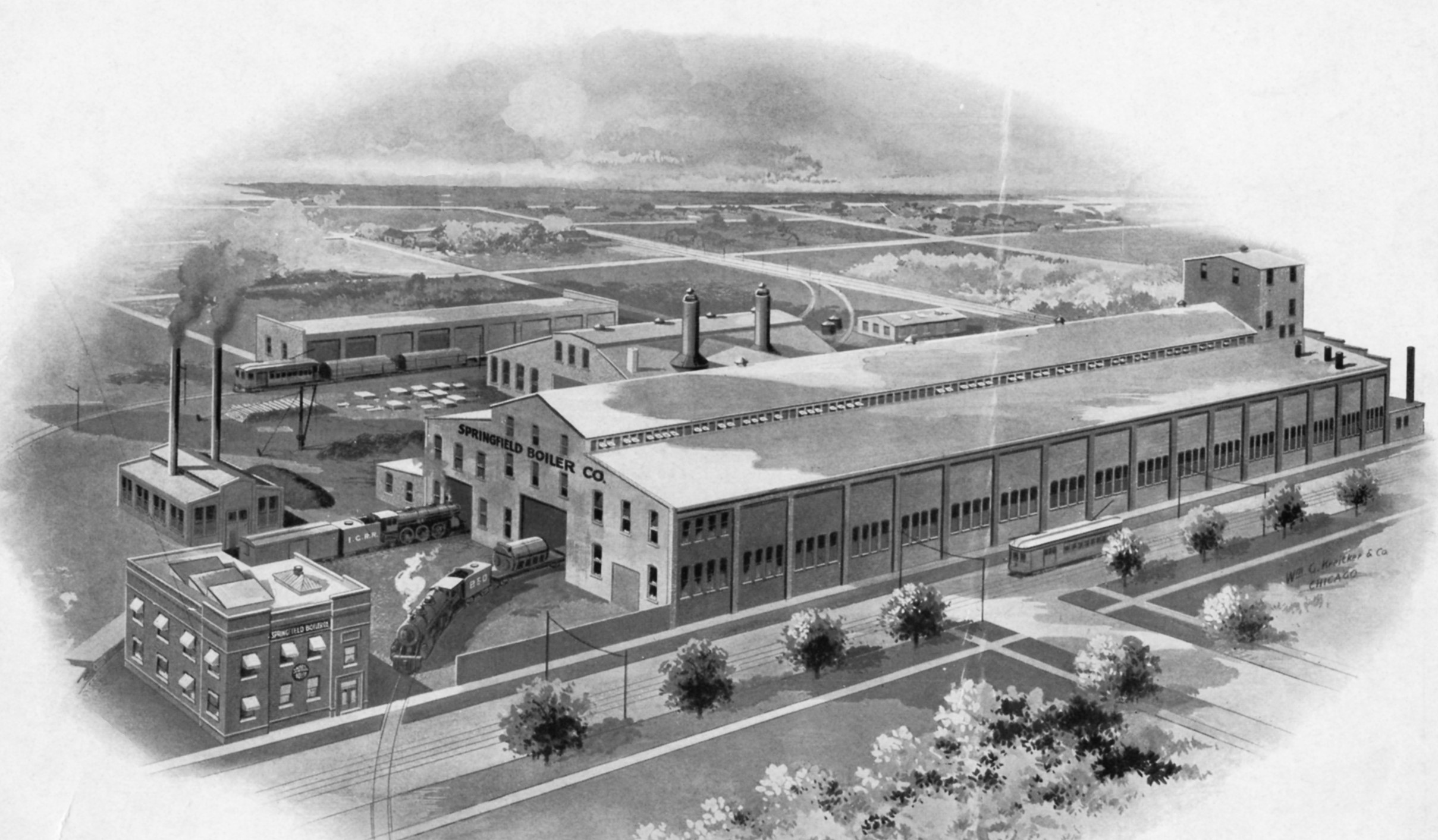 The Springfield Boiler Co., established in 1890, operated for 73 years in the 1900 block of East Capitol Avenue.

The firm, originally named Springfield Boiler and Manufacturing Co., produced a variety of steam boilers for power plants, breweries and manufacturers in general.

John McCreery (1832-1903), a hotelier, investor and former mayor, was one of the founders and Springfield Boiler’s first president (McCreery Avenue, named after him, runs along the east side of the former plant site.) Christopher “C.C.” Brown, McCreery’s vice president, replaced McCreery as president a couple of years later; C.C. Brown was succeeded by his son, Owsley Brown (1877-1946), in 1904.

“The Springfield Boiler Company, since its founding in 1890, has specialized exclusively in the design, fabrication and erection of highly efficient … economical steam generating equipment,” according to a brochure published in 1955, when  the company was a division of the John W. Hobbs Co.  “For sixty-five years, the company has had an outstanding record in contributing to the advancement of power plant boiler design.” 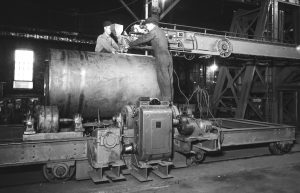 In Springfield, its boilers were used by City Water, Light and Power, the Capitol complex and the St. Nicholas Hotel.

The boiler company was sold to a Chicago investor in 1946, but came back under local control when Hobbs purchased it in 1953. Springfield Boiler became a separate operation, though still controlled by John Hobbs, when the Hobbs firm merged with Stewart Warner in 1955.

Approaching retirement, John Hobbs sold Springfield Boiler to a Milwaukee boiler manufacturer, Cleaver-Brooks, in 1958. J.S. Cleaver said at the time that no changes were planned in Springfield. “We want everything to remain as is,” he said, according to an Illinois State Register article in November 1958, when the sale was announced. “We hope to fill that plant with orders.”

Nonetheless, Springfield Boiler Co. closed up shop in 1963, and the plant was donated to the city of Springfield.

A decade later, a volunteer group, Boys Baseball Inc., spearheaded an effort to demolish the abandoned boilerworks and build a top-flight baseball field on the site.

Hundreds of volunteers did or contributed to the work, which was led by, among others, Dick Oglesby (1936-2017) and Mitch Shadid (1912-2000). Razing the boiler factory and building the ball field took almost five years. When done, the 4,000-seat stadium included a lighted diamond, restrooms, a concession stand and press box.

Oglesby described Boys Baseball’s hopes for the field in an interview with State Journal-Register sportswriter Jim Wildrick in April 1977.

“My whole idea from the start of this project was to have our park available for those boys and girls who do not have the opportunity to use Lanphier Park,” (Oglesby) replied. “Here I’m talking about the Khoury League, the Little League, the Pony League, the Colt League, the Thorobred League and the American Legion – hardly any of those are permitted to play at Lanphier.”

Oglesby told Wildrick he expected to be inundated with requests to use Chamberlain Park.

“I’ve had at least four letters from leagues already asking about the possibility of using the park.”

“Maybe I’m an optimist, but I don’t think so,” said Oglesby. “I see no reason why the park can’t be opened at 8 a.m. and have people use it all day, seven days a week, with the exception of Sunday morning. I’d love to see the field in use seven days a week.”

Oglesby was an optimist. Chamberlain Park, which eventually was taken over by the Springfield Park District, did get heavy use early in its existence, but changes in youth baseball trends left the field unused by 2022.

SJ-R sportswriter Bill Welt wrote in April 2022 about one of the most memorable baseball games ever played at Chamberlain Park: Southeast High School’s 44-8 drubbing of Peoria Manual in 1988.

“Chamberlain Park lurks unattended like a forgotten relic, and even the City Series has recently been discontinued,” Welt concluded. “That ball game — not to mention Chamberlain’s prodigious dormant lights and forlorn mystique — evokes memories past.”

“Those were some good times,” Tony Webster, one of the players on that SEHS team, told Welt. “I played with some good people and lifelong friends. It was a blast.”

This entry was posted in Business, Industry, Sports and recreation and tagged John W. Hobbs. Bookmark the permalink.