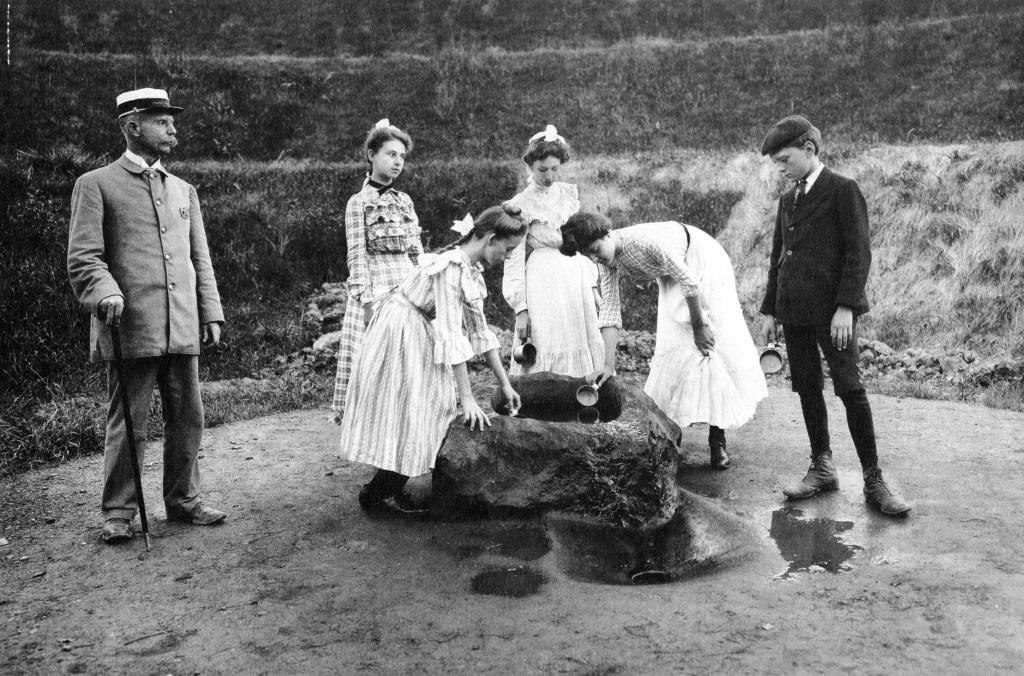 Dipping water from the Iron Spring, early 1900s. The man to the left may have been a park custodian. (Sangamon Valley Collection)

The Iron Spring in Washington Park originally poured forth from a sandstone cave at the foot of a steep clay bluff. Cattle drank its water. But when Washington Park opened in 1901, the spring was one of its earliest attractions.

An August 1901 Illinois State Journal article reported on the Springfield Park Board’s plans for the spring.

But the most delightful discovery is that of an iron spring on the Wiggins tract, adjoining the Washington park tract on the west and purchased by the park board for a portion of the new park. This water is pronounced an excellent quality of mineral flow and gushes in a steady stream from the bowels of the earth. Arrangements already have been made for the construction of a handsome spring house and this spot promises to be one of the most attractive in the retreat.

The park board had the cave walled up and a three-inch pipe installed to bring the spring’s water to park patrons. University of Illinois chemist Robert Stark found high amounts of calcium carbonate, magnesium sulfate and sodium sulfate in the water. Mineral springs were widely thought to have health benefits at the time.

“These minerals will doubtless produce some medicinal effect upon the system,” Stark wrote, according to a 1988 feature story on the park written by State Journal-Register reporter Elizabeth Bettendorf. “However, a physician will be better prepared to inform you on this subject than I.”

The spring, along with a concession stand built next to it, drew thousands of people over the next 60 years. At first, spring-water fanciers shared tin cups; later, they drank the spring’s mineral water from cone-shaped paper cups. Serious fans of the water filled their own five-gallon jugs.

“A lot of people really believed in that water,” nearby resident John Chapin told Bettendorf.

Sometime about 1958, tests revealed the spring’s water had become polluted, and the flow of water was shut off. 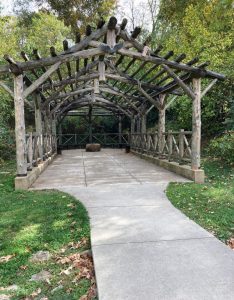 The spring was brought back to life, however, in 2010, largely due to the daughter of one of those who believed in the health benefits of Washington Park’s mineral spring.

Civic activist Polly Roesch (1910-2016) said her father, Otto Wenneborg (1871-1961), had always made sure his family stopped at the spring when they came to Springfield from Roesch’s hometown of New Berlin. Roesch donated funds to restore the spring and its surroundings, originally expecting that Springfield city water would replace the spring’s mineral water.

When engineers located the old spring and tested the water, however, it was found to be clean. So when Roesch helped rededicate the Iron Spring in October 2010, it was spring water that was flowing again at the site.

A commemorative plaque includes a poem written by Otto Wenneborg; it concludes:

Then I wonder why it is
That I am here to see
The grandeur of this work of God
That means so much to me.
And am I worthy to behold the miracle that’s there;
But I can only bow my head and think a thankful prayer.