Washington Park is one of the largest and the most popular of the parks in the Springfield Park District system. Built in 1900-01, the park is home to lagoons, tennis courts, and playgrounds as well as a botanical garden and a world-class carillon.

Washington Park is west of MacArthur Boulevard and north of South Grand Avenue. The site originally consisted of uplands cut by small streams that fed the Jacksonville Branch of Spring Creek, which had carved a small valley that runs roughly south-to-north across the west end of the property. Among the feeder creeks was the Williams Branch, which cut a long ravine from near MacArthur (then West Grand Avenue) to the Jacksonville Branch.

The landscape was not practical for growing field crops, although it was used for the grazing of cattle. An inventory taken around 1901 found that the tree cover consisted of 3,351 mature trees–1,753 oaks, 397 hickories, 375 elms, and 826 trees of 29 other species. 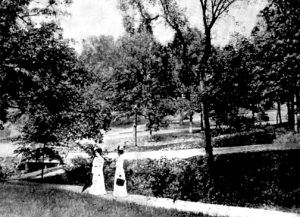 The streams that ran through the tract exposed thin seams of coal that lay near the surface. For a time in the 1850s, workers “gophered” coal from an exposed vein in a small ravine on the park’s western edge and loaded it into wagons for transport to Springfield.

Washington Park began in 1890 as a 17-acre private park at the end of a South Grand Avenue streetcar line. Developing recreational facilities at such rural retreats was then a popular means of stimulating traffic on streetcar lines during weekends and holidays. (Springfield’s Lincoln Park also began as a private streetcar park.) However, the new park’s facilities apparently were minimal; in 1900 they consisted of a pavilion and a cemented pool.

The streetcar park was absorbed into the larger public park in 1900. Springfield’s new Pleasure Driveways and Park District arranged the purchase of 130 acres including and abutting the “old park,” and 20 more acres were donated.

Later in  1900, noted landscape gardener Ossian Cole Simonds agreed to provide a plan for  the property. A strip of flat land between Walnut and West Grand Avenue  was to be transformed into a parkway entrance to the park. Simonds proposed two drives, one on each side of the 300-foot wide parkway flanked by trees. During the winter of 1901-02, 87 sugar maple trees were planted there, and the survivors are today some of the largest trees in the park. 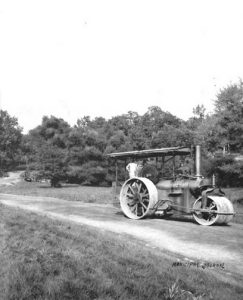 Apart from grading, drainage and paving needed to construct a series of winding drives inside the park proper, Simonds’ plan altered few of nature’s original features.

His one major change was to dam the Jacksonville Branch to create two small joined lagoons. The larger lower lagoon would be sufficient for boating, ice skating and (it was promised) bathing.

Simonds picked the site for the Pavilion, which was finished in 1904.  The building, which proved popular as a venue for meetings, dinners, and dances,  is the oldest structure still standing in the park.

A duck pond constructed near the Pavilion a few years later proved popular with kids as a fishing hole, and the many ducks that dwell there are well-fed by visitors.

Water from the so-called Iron Spring at the foot of a bluff on the north side of the park, touted as a cure for rheumatism, gout and indigestion, had been sold at the Leland Hotel. Later,  the spring was used for watering cattle, but it finally was abandoned altogether.

When the land was converted into park space in 1901, a pipe was installed in the silted-up spring so people could drink the water again. The spring was closed in  the 1950s, but reopened in 2010.

Tennis courts were first built in the park in 1911, on the high ground above the mineral spring. In 1914 the fledgling facility got a field house, followed by six more courts.  Vandals in 2002 set fire to the field house, burning it to the ground. The park district replaced it with a building indistinguishable in appearance from the original. 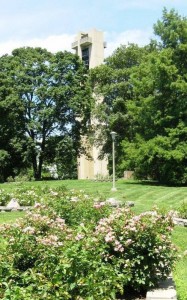 Portion of Rose Garden with carillon in background (SCHS photo)

The largest donated structure in the park is the Rees Memorial Carillon, a gift of the estate of Thomas Rees, publisher of the Illinois State Register from 1881 until 1933. The bell tower was built in 1962 on what is reckoned to be the highest spot in Springfield and is open for tours that provide views of the city. The tower contains 67 bells cast in The Netherlands, making it one of the largest carillons in the world. The park is the site of the annual International Carillon Festival.

Beneath the carillon on a south-facing slope is the Rose Garden. Opened in 1962, the garden features more than 3,500 plants and is accredited as an All-American Rose Selection Public Garden.

Simonds had advised against building a greenhouse, arguing that other projects should be given priority. One was built anyway and opened in 1909. That greenhouse was replaced in 1966 by a horticultural center and conservatory whose glass dome, 50 feet in diameter, protects a variety of exotic or tropical plants. Together they make up the Springfield Park District’s only botanical garden complex, which covers about 22 acres.

*In 1925, park trustees approved construction of the Louis L. Lehman Memorial Bandstand, which was named for the long-time director of the Illinois Watch Company band; Lehman himself selected the site near the duck pond. The small structure is mainly used today as a setting for weddings. 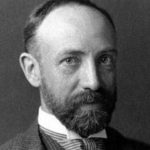 The Simonds plan remains remarkably unaltered after more than a century. For that reason, Washington Park was listed in 1992 in the National Register of Historic Places.

Note: Different terms been used over the years to describe the various features of the park. The small lagoon on the east end of the park near the Pavilion has been known as the lily pond, the duck pond, and the upper pond. The larger lagoons on the lower levels of the park along the Jacksonville Branch are also referred to occasionally as lakes. “Lower” and “upper” in the context of Washington Park sometimes refers to the upstream and downstream ends of the Jacksonville Branch, sometimes to the upland and ravine bottoms within the park.

Source: Washington Park in Springfield, Illinois: From Its Beginnings to Present Time by John Huther. Published by the author, 2009.

This entry was posted in Amusements, Sports and recreation and tagged Parks. Bookmark the permalink.