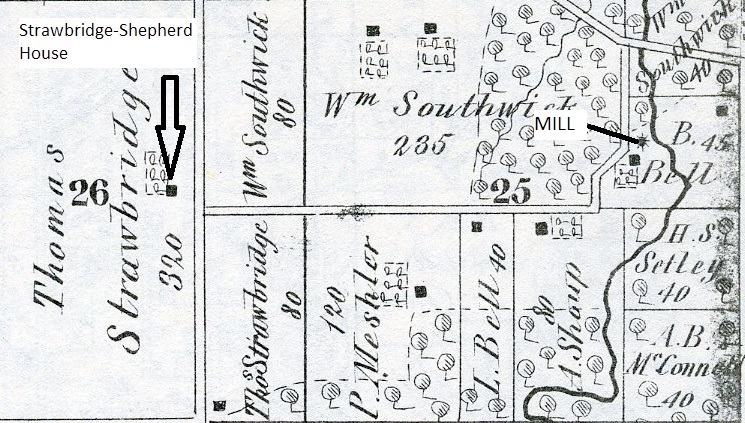 The location of the mill is noted on this map of Woodside Township from the 1874 atlas of Sangamon County. The mill site (legally described as in the southeast quarter of the northeast quarter of Section 25 in Woodside Township) was about a mile directly east from the Strawbridge-Shepherd house on the campus of the University of Illinois Springfield. (Sangamon Valley Collection)

The Newcomer-Bell Mill was on Sugar Creek in Woodside Township, on a site that today is covered by Lake Springfield south of Lindsay Bridge.

William Southwick (1805-83)purchased the property on Dec. 6, 1830 and formed a partnership with Armon Lathrop to build the mill.  The two men hired Springfield attorney James Adams to represent them in their application for a license from the Sangamon County Board of Commissioners to build a dam across the creek.

The sheriff reported at the Sept. 3, 1832 board meeting that the jury had visited the site and determined that “no dwelling house, out house, garden or orchard will be flood by reason of said dam” and that the health of the neighborhood would not be affected.

The board issued a license for Southwick and Lathrop to build the dam.

Southwick sold half ownership of the land to Lathrop for $25 on July 28, 1834. However, Lathrop and Southwick did not remain owners of the mill for long, losing the mill to Leroy Hill in a lawsuit.  William Ramsey and John Williams also briefly held part ownership of the mill before Hill gained possession. 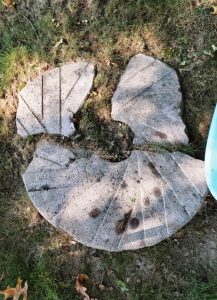 Pieces of a broken grindstone believed to have come from the Bell Mill located on a Lake Springfield house lot near the mill site. (SVC)

Nothing is known about the day-to-day operation of the mill. Newcomer may have bought the mill as an investment and not directly participated in its operation.

The 1850 census of Sangamon County suggests a man named John Carmon might have been operating the mill at that time. James Carmon, John’s younger brother, was listed next to him in the census.  James worked as a wool carder, according to the census, which indicates the mill might have powered a carding machine.

After Newcomer’s death, ownership passed on to John Robinson, but he sold the mill on Oct. 29, 1853 to Franklin Priest and Asa Eastman, Springfield businessmen who had operated a mill in the city.

Benoni Bell (1822-1910) bought the mill on June 14, 1861.  According to the Historical Encyclopedia of Illinois and Sangamon County (Bateman & Selby, 1912) Bell was a wagon maker before purchasing the mill.  He operated the mill until 1881, when he gave up the business to focus on farming.

Contributor: Curtis Mann (this is one in a continuing series of SangamonLink entries about Sangamon County mills written by Curtis Mann)

This entry was posted in Business, Early residents, Industry, Mills. Bookmark the permalink.