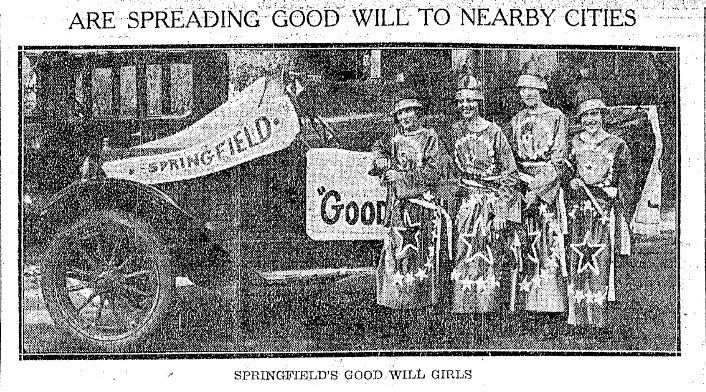 Springfield’s Good Will Girls of 1922; third from left may be Ora DeLaugauldt (Courtesy State Journal-Register)

The Good Will Girls were the brainchild of a convicted con man, but they became the stars of a Springfield Chamber of Commerce bid to attract out-of-town shoppers in the 1920s.

The chamber periodically sponsored car caravans to outlying communities for county fairs and special events, such as when Litchfield celebrated the opening of the Illinois 16 “hard road” from eastern Illinois in September 1926.

The Good Will Girls were a troupe of about a half-dozen young women (the number varied from year to year and event to event) chosen by local businesses to represent Springfield during the visits. They wore costumes based on the Springfield city flag, topped by hats designed to represent the Statehouse dome. Their job was to greet event patrons and hand out green and red tags bearing “the Springfield ‘Smile’ slogan.”

Chamber caravans were elaborate productions. Anyone with an automobile was invited to join in — 50 cars lined up for a trip to Pawnee for the Sangamon County Farmers Institute in 1922. For the Litchfield excursion four years later, every car carried a “Springfield” banner, and every participant’s hat had a “Springfield” hat band. The Illinois Watch Factory Band went along for the ride, as did a steam calliope.

“Springfield’s Goodwill Girls will accompany the delegation, to dispense good cheer, greetings, distribute souvenirs of this city, and add to the jollification,” the Illinois State Journal reported. Others represented at Litchfield included individual businesses and all of Springfield’s civic clubs, the newspaper said.

Both automobiles and highways were unreliable in the 1920s, however, so the Chamber took precautions.  “An official service car provided by the Springfield Auto Club will follow the caravan all the way,” the Journal added. 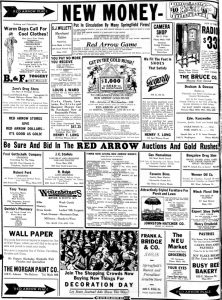 The concept turned out to be popular. Dozens of Springfield businesses used Red Arrow coupons as sales incentives, and Red Arrow may have been even more popular in smaller towns. The company boasted in 1921 that more than 100 merchants were offering Red Arrow money throughout Sangamon County.

For a while in the mid-’20s, Red Arrow had a display outlet at 318 E. Adams St. When Red Arrow held a charity carnival in 1934, 40 churches and other nonprofits set up sales booths and sideshows . An estimated 20,000 people attended the carnival, held at the Uptown Garage. Red Arrow later distributed a total of $2,000 (in real dollars) to the organizations in proportion to their Red Arrow collections.

Neither the Chamber of Commerce nor businesses that signed up with Red Arrow appear to have been daunted by DePew’s 1908 conviction for operating a confidence game.

DePew had convinced a local man, Peter Coutrakon, that Coutrakon could make good money selling chewing gum for an Indiana company, American Specialty Co. DePew told Coutrakon he had to put up a $25 bond to be hired. Instead of sending Coutrakon’s money to the Indiana firm, however, DePew mailed American Specialty an envelope full of blank paper.

The charge at first was dismissed, on the grounds that American Specialty did send Coutrakon a sample case containing chewing gum, order blanks and three fountain pens. Coutrakon persisted, however, and DePew finally was convicted of fraud. He was sentenced to up to 14 years in state prison, but was bonded out of county jail after only two months in confinement; he apparently never served another day in prison.

Ora DeLaugauldt (1887-1964) the lead Good Will Girl, also had a colorful past. Under her maiden name of Holben, she was well known in Springfield as an amateur auto racer at the Illinois State Fair. She went on to have at least a brief professional career both before and after her marriage. Journal clippings show she defeated another woman in a match race at the Ohio State Fair in 1917, and she was timed at 49 seconds for a one-mile exhibition in Dallas, Texas in 1916.

Original content copyright Sangamon County Historical Society. You are free to republish this content as long as credit is given to the Society.Learn how to support the Society.

This entry was posted in Business, Springfield, Women. Bookmark the permalink.