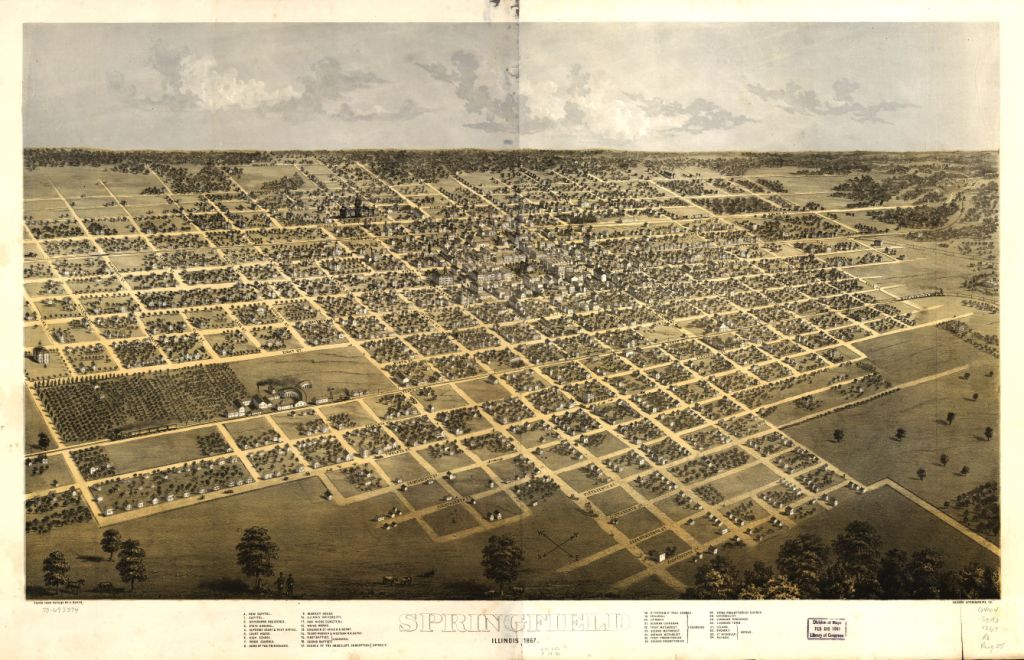 Although not to scale, the 1867 bird’s-eye view of Springfield drawn by A. Ruger for the Chicago Lithographing Co. is considered accurate in its placement and depiction of city buildings and streets. Note that the map is oriented with north to the right.

“His numerous views of midwestern cities provide us with clear and useful images of towns and cities of that region in the first decade after the Civil War,” wrote John W. Reps in Views and Viewmakers of Urban America: Lithographs of Towns and Cities in the United States and Canada, Notes on the Artists and Publishers, and a Union Catalog of Their Work, 1825-1925 (1984) “… His views are well drawn and from a sufficiently high perspective to display fully the street patterns and other major elements of the places depicted.

“The result of his and (others’) efforts is a magnificent legacy of urban portraits — particularly of the Midwest — affording us glimpses of city and town life that are attractive to regard and rewarding to study.”

Map source: Library of Congress; a zoomable version is available from Dickson College. And a full-size paper version of the Ruger map is on display in the Sangamon Valley Collection at Lincoln Library, Seventh Street and Capitol Avenue.

Recommended: Although the reader can expand this map (click on the graphic and then click on the ‘plus’ symbol), this remains a compressed version. The map is in far better detail at the Library of Congress site.

A. New Capitol ( Ed.: Although shown on the map, the current Statehouse did not exist in 1867; in fact, ground wasn’t broken for construction until 1868. The map image apparently was taken from the construction plans.)

8. Home for the Friendless