Gertrude Stein’s prose-poem “Miss Furr and Miss Skene” was the first literary use of the word “gay” in the context of a same-sex relationship. The woman Stein called “Miss Furr” was patterned on Springfield-born artist and bohemian Ethel Mars (1876-1956?); “Miss Skene” was Mars’ life-long companion and collaborator,  Maud Hunt Squire (1873-1954). 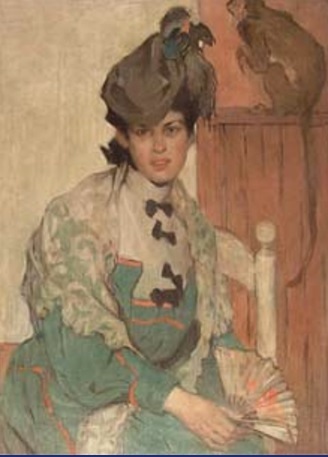 “Woman With a Monkey,” possibly a self-portrait by Ethel Mars, is owned by the Springfield Art Association (Wikipedia)

Mars also played a role in the creation in 1909 of Springfield’s Amateur Art Study Club, which evolved into the Springfield Art Association.

Mars was the daughter of Adelia and Alonzo Mars. Alonzo Mars was an aide to the superintendent of the Wabash Railroad shops, which were located in Springfield until 1914. His obituary described him as “for many years one of the best known railroad men of Springfield.”

Ethel Mars got her first artistic recognition in the pages of the Illinois State Journal in April 1891, when a crayon drawing she did went on display in the window of Frank Simmons’ bookstore and art gallery on the east side of the square. “The picture is said to be the finest of its kind ever exhibited by an amateur,” the newspaper said.

Mars graduated from McClernand Grade School a couple months later. In 1892, she entered the Art Academy of Cincinnati, where she met the Ohio-born Squire and the two began their lifelong relationship. Mars remained at the Cincinnati school until 1898, but returned to Springfield regularly – often, according to newspaper social columns, accompanied by Squire. She also took top prizes in Illinois State Fair art contests during the period.

Mars and Squire were a couple professionally as well as personally, collaborating, for instance, on A Child’s Garden of Verses, a volume of Robert Louis Stevenson’s childhood poems published in 1900.

“They were both drawn to color and simplified forms in their work, they produced lively vignettes that chronicled the places and people they encountered during their travels,” Jennifer Hardin wrote in a 2018 review for the Cincinnati Art Museum. 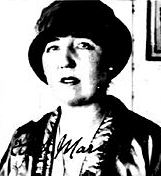 Mars and Squire worked first in New York, but moved about 1906 to Paris, where they circulated in the artistic demi-monde that swirled around Stein’s studio and gallery. They fraternized with such luminaries as Henri Matisse, Pablo Picasso, Ernest Hemingway and F. Scott Fitzgerald.

“Like so many American artists and writers of the time, they felt a magnetic attraction to the city and quickly installed themselves at the local cafes,” Hardin wrote. “Immersed in Parisian bohemia, Mars was known to dye her hair purple and wear orange lipstick.”

While in Paris, Mars found success in painting, printmaking and chalk drawing. Her work was often inspired by imagery of everyday life in Paris. She exhibited at the Société Salon d’Automne as well as the Paris Salon and was elected to membership in both. Her artwork also continued to find favor at home. In 1909 her painting “Woman with a Monkey” was featured in Harper’s Weekly magazine. This painting also won the “Best Painting by a Woman” award at the 1910 exhibition of the Society of Western Artists.

Critic Grace Glueck analyzed Mars’ style when a show of Mars’ and Squire’s work opened in New York city in 2000.

Among her best prints of this (the Paris) period are those cued by the work of the era’s greats, Bonnard, Matisse and Vuillard, among others. There is charm and humor in the pared-down forms of ”Nice” (1913 or earlier), a vividly colored vignette of two women strolling along a promenade. One is old, portly and beady-eyed, wearing a purple printed shawl and voluminous skirt; the other, young, comely and slim, holds an umbrella and walks a spidery little dog. The backdrop is palm trees and the sea.

Stein published “Miss Furr and Miss Skene” in Vanity Fair magazine in 1923. In keeping with the censorious nature of the times, Stein never refers directly to the couple’s sexual relationship, though she leaves little doubt about its nature.

While most people probably couldn’t identify Stein as their author, two Stein phrases have become bywords: “Rose is a rose is a rose is a rose” and “There is no there there.” In “Miss Furr and Miss Skene,” Stein takes that repetition-for-effect to even stranger extremes – she uses the word “gay” more than 130 times. Here’s a sample (the full text can be read here):

It took 50 years for “gay” to become widely synonymous with same-sex attraction, but Stein’s story is widely accepted as the first use of that meaning in literature.

“Miss Furr and Miss Skene” isn’t strictly biographical. In the story, Stein has Furr/Mars leave her “quite a pleasant” husband to take up with Skene/Squire. Mars was never married. And toward the ends of their lives, Furr and Skene cease to live together. In real life, Mars and Squire remained a couple until Squire’s death in Vence, France. There appears to be no question, however, that Mars and Squire were the prototypes for Stein’s characters. 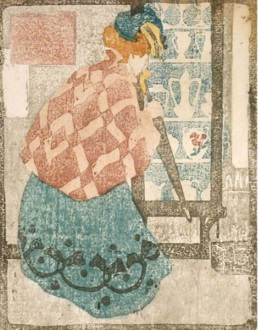 An untitled work by Mars, informally known as “Woman at Shop Window” (Wikipedia)

Mars and Squire spent the summer of 1909 visiting Mars’ parents in Springfield. While in town, Mars became involved with efforts spearheaded by Georgia Watson Miner (1876-1956) and Elizabeth Thomas Capps (1854-1953) to create the Amateur Art Study Club. Mars spoke (along with Vachel Lindsay) at the club’s first meeting. She also hosted one of the club’s early get-togethers at the home her parents were renting, or perhaps house-sitting, at the time – a mansion at 1190 Williams Blvd. owned by former Gov. Richard Yates.

Before they returned to Paris that August, Mars was declared a life member of the club, and Squire received an honorary membership.

Mars and Squire left Paris at the start of World War I to live in Provincetown, Mass. After the war, they lived in Vence, on the French Riviera. Squire largely retired, but Mars continued to paint until nearly her death (the date of which is unclear; some sources say she died in 1956, while others put her death as late as Sept. 23, 1959). Mars and Squire are buried in Vence.

Hat tip: To Erika Holst, formerly with the Springfield Art Association and now curator of history at the Illinois State Museum, for reminding SangamonLink of the remarkable life of Ethel Mars. The museum holds a number of Mars’ works.