Authorities squelched a statewide crime wave with the arrests of a Springfield-based stickup gang in March 1938. 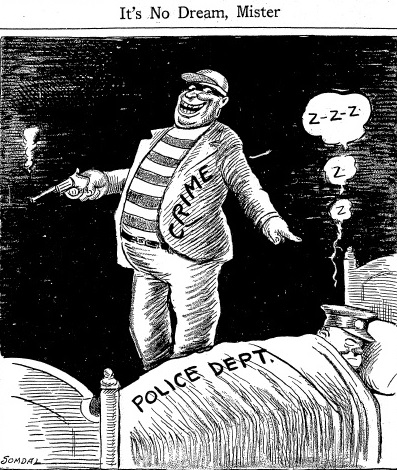 Springfield police were under pressure to apprehend the gang, as shown in this cartoon pubished on page 1 of the March 4, 1938, Illinois State Journal. The artist was newspaper cartoonist Carl Somdal. (Courtesy State Journal-Register)

Sangamon County assistant state’s attorney John Curren called the group, which he credited with 150 or more robberies, “the best organized gang of bandits since prohibition.” There could have been as many as 30 gang members, Curren said, but the heart of the group apparently was a half-dozen or so central Illinois residents.

The bandits “worked with smoothness and precision,” Curren told an Illinois State Journal reporter, and that allowed them sometimes to pull off three or four stickups within a few hours.

They took no hazardous chances and made no costly errors which would have meant immediate capture.

Curren, reconstructing movements of the group, said the gang has hideouts in East St. Louis, Springfield and Chicago. Three or four men would be assigned to one job, two entering a store or filling station, while the other two remained in the car. In the next holdup, positions of the four would be reversed. …

The gang is suspected of having robbed stores in Springfield, Decatur, Champaign, Danville, Bloomington and other towns throughout the state. When a holdup was made in Springfield, Curren said, the bandits would flee by automobile to Chicago or East St. Louis to hide out. If a robbery was effected in Chicago, the members of the gang would flee to Springfield.

The bandits apparently tried for few big scores. Their targets tended to be small businesses or even individuals, and jobs were quick in-and-outs. The robbers, however, were calm and meticulous. On the evening of March 2, 1938, for instance, three gunmen struck two Springfield drug stores – Zorn’s, 1149 W. Edwards St., and Sommer’s, 500 N. Sixth St. – only 20 minutes apart, the Journal reported.

In both places the customers in the store and the clerks in attendance were hustled to the rear while the holdup men methodically ransacked for cash. After each robbery, all persons in the stores were forced to go into the basement. …

(At Zorn’s) while the holdup was in progress, a small boy entered the store, the interior of which is shielded from the street by high window displays. One of the robbers calmly waited on the boy and sent him away with candy.

Sommer’s was a block from the former Ss. Peter & Paul Church, which was holding Lenten services at the time. Cars were parked up and down the street, and customers kept entering the store during the stickup; each was escorted quickly to the back of the store and told to lie down. Even though a witness called police after seeing a masked man go in the store, the robbers got away before officers responded.

The gang took $350 or so from Zorn’s and its customers, but got only about $30 at Sommer’s, the Journal said.

The height of the gang’s robbery spree was in early 1938, but it didn’t last very long. Police chased down most of the bandits that March.

A couple of days later, a squad of state, county and city police, led by Curren and Frank Figueira, assistant superintendent of the Illinois Department of Criminal Identification and Investigation, ambushed Springfieldians Charles Longest and Clarence Dowell at 24th and Cedar streets.

The police … apprehended Longest as he attempted to pull a gun from his pocket. Dowell fled to a nearby house, where he was captured. …

Longest and Dowell were lodged in the city prison, Longest charged with armed robbery and Dowell with robbery. Figueira said Longest was sought by Chicago police in connection with several holdups in that city, while Dowell is suspected of several automobile thefts. 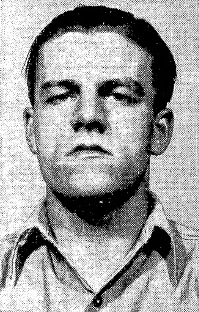 A third man ran through high weeds and got away. Police said later that man was George Kunkler, whom Curren called the gang’s “gunman.” Kunkler was caught in April, when he was shot and wounded during an attempted drug-store holdup in Detroit, Mich.

All of the members of the gang presumably spent time in prison, although Springfield newspaper stories provide little followup. That may be because of the widespread nature of their crime spree – it’s likely that many of the gang members were prosecuted elsewhere, and the Journal couldn’t cover all the resulting legal proceedings.

However, the man described as “the brains of the gang,”  Charles Longest, was prosecuted in Sangamon County. Longest, a barber by trade, already had a criminal record when arrested as part of the gang – he earlier spent 42 months in Pontiac state prison for burglary and larceny. Aside from the gang’s local robberies, Longest was accused of holding up a bookie in Chicago and of a raft of stickups in Rockford, during one of which he shot and wounded a finance company clerk.

Longest (1910-1960) pleaded guilty to armed robbery in Sangamon County court and was sentenced to an indeterminate term in prison.

He was being held in Menard state prison in 1943, when a special U.S. Army unit examined prison inmates to determine if any of them would make good soldiers. Despite Longest’s lengthy criminal record, he passed “physical, mental and moral” tests for Army service and was given parole.

Longest was inducted into the 88th Division and deployed to Europe. In November 1944, the Journal reported that Longest had demonstrated bravery under German fire.

Early next morning the Germans reached the positions they had abandoned the night before and knocked out one of the emplacements. As the Germans counterattacked, some of the Yanks carried the weapons back to previously dug positions. Here Longest took over and within two hours put one of the machine guns into working condition.

Longest was awarded the Bronze Star, and he held the rank of sergeant when he was demobilized.

Longest resumed his barber career in Springfield and apparently led a blameless life thereafter. He is buried at Oak Ridge Cemetery.