When smallpox broke out in Springfield in 1901, the Springfield City Council decided to build a “pest house” where victims could be isolated and cared for. The problem – in the face of neighborhood objections, a series of court contests and a couple near-riots – was where to build it. 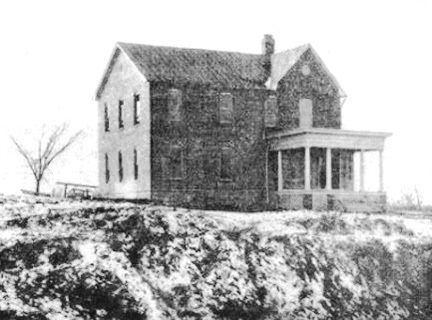 The 1901 outbreak began in February. At the time, smallpox sufferers were cared for either at their homes, where quarantines were enforced by guards hired by the city, or, in the cases of “paupers,” at a hotel the Salvation Army operated in the 100 block of South Eighth Street. The Illinois State Journal reported that smallpox was “prevalent in the south part of Sangamon County,” and four schools had to close their doors.

The need was critical, the Rev. Orville C. Clark of Plymouth Congregationalist Church wrote to the Illinois State Register.

(S)mall pox illustrates most poignantly the fact of the pressing need that exists in the city’s sanitary arrangements. That a suitable place to care for the victims of malignant and contagious diseases should be provided is a fact that is too evident to even need the statement. The absence of such accommodations result in unnecessary burdens thrown upon those who suffer from these diseases and is a constant menace to the safety of the city.

Aldermen surmised that Springfield could finance the construction of an isolation hospital for about $2,000.

The city health department favored building the isolation hospital in a rural area near Oak Ridge Cemetery, probably near where a similar pest house had operated in the 1880s. The city even acquired tents from the state of Illinois to erect a temporary shelter there, but the proposal caused a public uproar.

“The very thought of carrying a sick person to the cemetery is harrowing and it certainly would be revolting to the victim and would greatly retard if not entirely prevent recovery,” the Register said. “The surroundings of the hospital … should be made as cheerful as possible.”

Objectors sought an injunction against the location, pointing out the proposed site was across the road from a slaughterhouse and only 400 feet from two houses. The plan went into limbo, and the Salvation Army continued to operate the city’s quarantine shelter.

Agitation for a better facility subsided by June, when the number of smallpox cases at the Salvation Army dropped to just three. “Within a few days the weather will be warm and the disease germs cannot thrive in summer heat,” the Journal said.

Besides, the health department reported, it had no money for a pest house, because caring for smallpox sufferers and enforcing quarantines had depleted its finances. A long rope barrier around the Salvation Army building was removed after the last smallpox patient was “fumigated” and sent home that summer. The entire contents of the building then were burned; the city reimbursed the Army $207 for the destroyed items.

In September, however, smallpox re-emerged in Sangamon County. Two tramps traveling through Rochester were among the first diagnosed cases. They were promptly quarantined. The men put up no objection, the Journal reported.

The hospital consists of a tent, and the tramps in it are practically “Lords of all they survey.” The villagers who came in contact with the two fellows are far more seriously frightened than are the patients, who seem to be enjoying life.

Several areas in Springfield also were affected, but Mayor John Phillips said the city had no money left for quarantine supervision. Instead of guards, he said, “placards showing that smallpox exists will be placed on houses as is done in another contagious diseases such as diphtheria, scarlet fever, etc.”

After a court ruled that counties would have to pay all expenses in connection with future outbreaks, Springfield resumed its efforts to build a pest house. The city’s first step was to erect a tent near the Sangamon River as an emergency isolation shelter prior to building a permanent facility there. Once again, the city was stymied by an injunction – objectors said the location was too close to the city’s water pumping station.

City officials next decided to put the isolation hospital in Oak Ridge Park (the heart of today’s Lincoln Park) – but, this time, they did so in secret. City workers installed a stove in a small park building known as “the pagoda;” two smallpox sufferers were moved in before the public knew they were there.

The problem was that the park bordered the then-independent north end community of Ridgely – in fact, it may even have been partly inside Ridgely; city limits were fuzzy – and Ridgely residents weren’t having any part of it.

Led by village constable Gabe Ford, a mob of Ridgely residents marched on the pagoda, forcing a Springfield police officer posted there to leave. The guard notified the Sangamon County sheriff’s office, and two deputies convinced the Ridgely delegation to leave the smallpox patients alone.

Another smallpox outbreak hit Sangamon County in January 1902. Twelve patients were placed under quarantine by Springfield’s health inspector, and 20 more residents were under medical surveillance by the end of the month. The temporary hospital in Oak Ridge Park quickly filled up, and the Journal listed the addresses of eight homes placed under quarantine.

One smallpox sufferer, Frank Fry, was boarding at a home in Springfield when he came down with smallpox. When the health department was informed, Fry skipped town to avoid going into isolation at Oak Ridge Park. As cases mounted, the newspapers said, at least one homeless man was walking the streets infected with smallpox. By the end of January, the isolation hospital had its first death, that of John C. Curtis, a 49-year-old from Kentucky. “His funeral will be conducted under the most strict quarantine regulations,” reported the Register.

Springfield got a breather over the summer. In June, health officials said no new cases of smallpox had been reported for more than 10 days, and after the last patient in Oak Ridge Park was discharged, the temporary pest house (described as “an old shack” by the Register) was burned to the ground and the area around it disinfected. 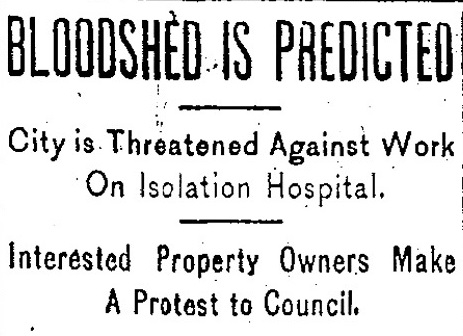 Meanwhile, the city council identified a new site near Dorlan and Patton avenues for a permanent isolation hospital. The area, not far from today’s Douglas Park, was mostly vacant and relatively secluded.

Once again, however, area property owners became agitated about the idea. At one point, 20 men wearing bed sheets as disguises waved guns in the face of a city security guard. “Bloodshed is predicted … City is threatened against work on isolation hospital,” a newspaper headline said.

The city at last identified a usable location in September, though officials had to go back pretty much to their original choice. The Register reported:

Springfield’s pest house will soon be underway… The building, which is dreaded by residents and all portions of the city, will be located west of Oak Ridge cemetery near Spring creek, and work will be commenced in the near future … It is a great distance from any residence and distant from any public thoroughfare.

The new site was 8½ acres of land near Cantrall Road – basically today’s Walnut Street/J. David Jones Parkway – west and north of the cemeterys 1902 boundaries. (Oak Ridge has been expanded since, and the pest house land now is part of the cemetery itself.)

Contractor Robert Flesch began building the hospital in October. It was designed to be as pleasant as possible. Architecturally, it was a modest brick building resembling a home, not an institutional sanitarium, and the city did its best to provide modern conveniences: the two bathrooms were heated, running water was provided, the building had telephone service, and officials hoped to persuade “one of the electric light companies to string a wire to the hospital,” the Journal reported.

A total of 40 patients could be accommodated. The first floor was reserved for the wards, while the second floor contained private rooms “for persons who are in a position to pay for the privacy.”

For once, neither injunctions nor angry residents got in the way of construction. That was good, because by the close of 1902, Springfield was reporting another 250 smallpox cases.

To manage the hospital, the board of health advertised to hire “a white, married couple,” no medical experience required. The job was awarded to Edward Lantz and his wife, a couple from Taylorville who both had been exposed to smallpox and therefore were immune to the disease. They took over management in January 1903.

Their first patient was Springfield resident Edna Wilson, who had contracted smallpox on a trip to Saline County. She quickly recovered and was discharged. Upon her release, city officials declared Springfield free of smallpox.

The isolation hospital helped abate later outbreaks, too. In the winter of 1907, Springfield reported 101 cases of smallpox. At the tail end of that outbreak, officials stated, “only a few cases now remain and six of these are … at the isolation hospital.”

Smallpox rates started to drop during World War I, when troops were inoculated upon entering service. In Sangamon County, widespread smallpox inoculation for children appears to have followed suit shortly after the war. Nonetheless, the county suffered documented smallpox outbreaks in 1928, 1937 and 1938.

In May 1980, the 33rd World Health Assembly of the World Health Organization concluded that smallpox had been globally eradicated.