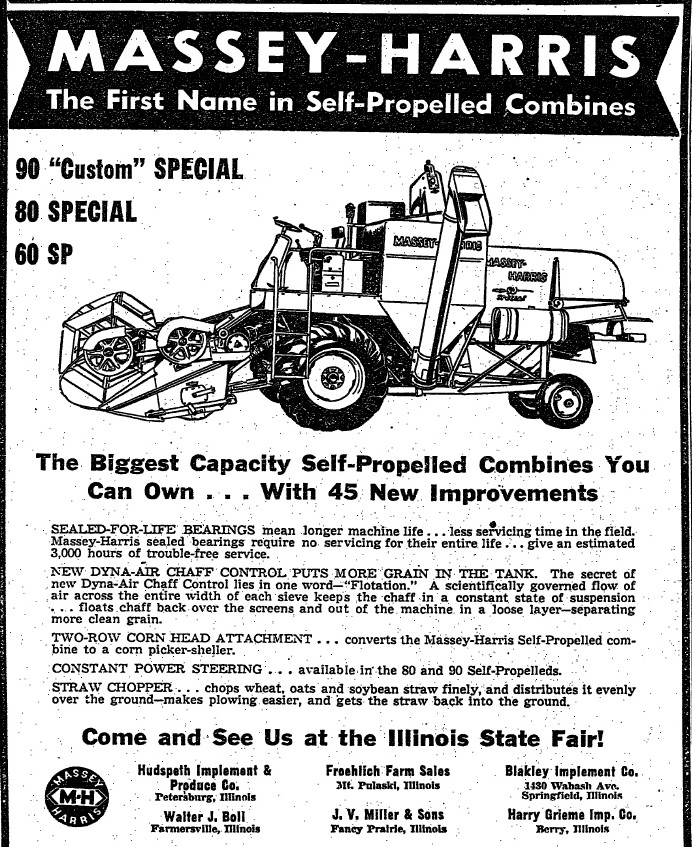 Massey-Harris demonstrated its self-propelled combine, which had an available corn head, at the 1955 Illinois State Fair (all photos and illustrations courtesy State Journal-Register)

Sangamon County farms switched from man- and horsepower to fully mechanized operations in fits and starts over more than 80 years. But the key impetus may have been six disastrous weeks of rain in the fall of 1926.

Horse-drawn threshers, which separated grain from the stalks, were being sold in central Illinois by the 1870s, and “traction engines,” usually steam-powered, became available about the same time.

The sharp competition between the manufacturers of traction engines made more than usually interesting the display of some nine or ten engines of this character. The most notable event in this connection occurred at 1 o’clock, when the J.I. Case engine … steamed into the ring drawing its water tank, their popular “Agitator thresher, a La Belle wagon, a Mitchell wagon, a J.I. Case sulky plow and cultivator, and a champion corn planter. Covering these machines were about 400 men and boys, who filled every available space on them, making a load equal to fourteen or fifteen tons, which would require seven or eight teams of horses to move. The engine … with but eighty pounds of steam moved this great load without trouble or any sort of inconvenience. To say it was the feat of the fair in its way would be but faint praise.

Traction engines were heavy, however – too heavy for most roads (S.E. Prather was arrested in 1889 for “running a traction engine through the streets” of Springfield) and definitely for many bridges built for horse-and-wagon traffic. A state law required heavy planks to be laid on a bridge before any traction engine tried to cross. Even with that precaution, at least three men died in two Sangamon County bridge collapses caused by traction engines.

One of the accidents involved a custom threshing operation set up by brothers William and John Deinlein of the Illiopolis area. The Deinleins bought a traction engine in 1893. Their crew was traveling from one farm to another for the wheat harvest in August 1894 when they encountered what the Illinois State Journal characterized as “an old wooden structure which someone had named a bridge.”

Crew members laid thick oak planks on the bridge, but the planks didn’t reach from end to end. The  engine was stopped in mid-span while John Deinlein and an employee moved the planks, the Journal said. Another employee, Charles Hudson, and Will Deinlein stayed on the engine, according to the Journal story.

The latter opened the throttle and there was a crash. The section of the bridge on which the engine was standing gave way and the two men were buried under the wheels of the engine in the river bed below, a distance of nearly twenty feet. …

A steam pipe burst by the fall and the escaping steam made it impossible to render the pinioned men any aid. The fall was so sudden that neither of the men was given an opportunity to jump. A number of the hands gathered round and the lifeless forms of the unfortunates were removed from the debris to the river bank.

Newspaper ads suggest local farmers had started to buy smaller, more versatile tractors by the early 1910s, but the two big factors that boosted sales were World War I, when many farmhands were drafted into the armed forces, and the Ford Motor Co.’s entry into the tractor business with its Fordson model in 1918. 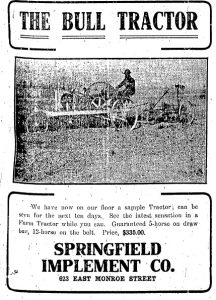 Jennings Auto Sales, 918 E. Adams St., the local Ford auto dealer, also held the Fordson franchise beginning in June 1918. As an introductory gimmick and a patriotic nod to the need for greater wartime food production, Jennings was allotted 125 tractors to be sold “without profit to either manufacturer or distributor,” the Journal reported. The sale price wasn’t given, but two years later Fordsons were advertised at $875 each, delivered.

A month after the Fordson was introduced, the Illinois State Journal sponsored Sangamon County’s first-ever tractor and truck show on the downtown square. “We are going to keep the horse, and we are going to use the tractor,” E.A. White, head of the farm engineering department at the University of Illinois, told the 500-some farmers in attendance.

Ten tractor manufacturers were marketing in Sangamon County at the time, eight of which – Fordson, Case, E-B, Heider, Waterloo Boy, International, Cleveland and Moline-Universal – were represented in the show.

The Garwood brothers of Stonington in Christian County claimed their 1923 purchase of a “combine harvester” was the first anywhere east of the Mississippi River. But combine sales took off in central Illinois a mere four years later.

That mainly was the result of incessant rains at what should have been the peak of the 1926 harvest. The worst storms – as much as eight inches of rain was reported in some areas – pummeled Sangamon County on Sept. 8, inundating downtown Springfield, setting flood records for area rivers and soaking farm fields.

Total loss of most of the grain still in the fields was caused by the heavy downpour of Wednesday, according to Farm Adviser Edwin Bay, who talked yesterday with many farmers from all parts of the county. …

Grain standing the shock along streams which overflowed their banks was swept away, and even in the uplands the continued wet spell has damaged the crops so badly that practically all hope of harvesting has been given up. Sprouting has been prevalent and the loss is widespread.

Every time one looks at the unthreshed grain still standing in the fields it depresses terribly. It represents a waste of labor and toil and time which was put into its production. It represents blasted hopes of expected income. It represents a loss which in many instances can illy be sustained.

Crawford concluded by predicting many farmers would respond by investigating “the combine machine, which will cut and thresh the grain in one operation.” That proved to be an accurate prediction; in July 1927, the Journal reported that International Harvester already had sold 60 of its tractor-drawn McCormick-Deering combines in central Illinois.

These machines, which are marvels of inventive genius, cut and thresh the grain at the same operation, delivering it into the wagon ready to be sent to the granary or the elevator. Not only is the saving in time and labor immense but the machine insures the grain protection from the effects of future bad weather. 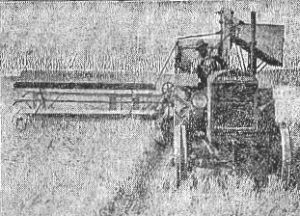 Had these sixty machines been in operation throughout this section last year its agricultural returns would have been hundreds of thousands of dollars greater. Oats and wheat were out and were shocked in the field as usual, but before the thresher got around to them the severe rains set in and prevented hundreds of farmers from threshing. Thousands of acres grew up in weeds about the shocked grain, which sprouted or rotted, in either event being a total loss to its possessors. One farmer north of the city lost ten thousand dollars worth of wheat in this manner. This year he has a “combine.” All about him similar disaster was recorded. The sale of “combines” in that particular vicinity has been good.

Early combines tended to be pulled by tractors and powered either by the tractor’s power take-off or their own secondary engines. Also, while early combines could handle most grain types – such as oats, wheat, soybeans, and barley – corn still required a two-step process: picking, then shelling.

This entry was posted in Agriculture, Business, Farming, Industry. Bookmark the permalink.