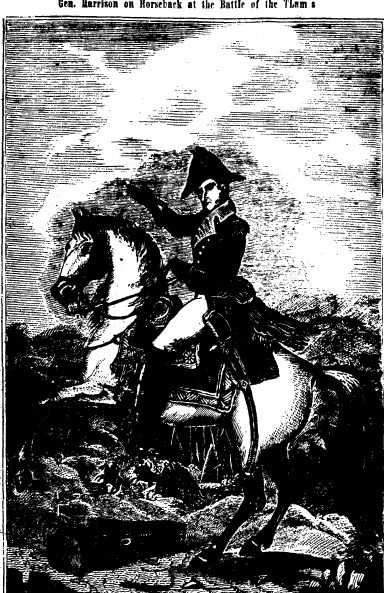 William Henry Harrison at the Battle of the Thames (during the War of 1812); illustration published in the May 22, 1840, Sangamo Journal (CourtesyState journal-Register)

The Whig Party of Illinois held a giant rally in Springfield from June 2 to June 4, 1840, in support of their presidential candidate, William Henry Harrison. (Harrison and vice-president candidate John Tyler were known by their slogan “Tippecanoe and Tyler Too.”)

William Wilson (1794-1857) of Carmi, the chief justice of the Illinois Supreme Court, described the event in a letter to his wife, which he wrote as the rally – officially named the Whig Young Men’s and Old Soldiers Convention – was concluding. Much of what he wrote is confirmed by accounts published in the Sangamo Journal as well.

Both Wilson and the Journal estimated that 15,000 people attended the rally. Even if that was an overestimate, it’s clear that the crowd would have swamped Springfield, which at the time had a population of less than 2,600.

The June 4 parade began at the home of Elijah Iles near today’s Sixth and Cook streets (the Elijah Iles House has been moved twice since then and now is at Seventh and Cook streets). The bulk of the delegates – 79 counties were represented, according to the Journal – camped there as well.

The procession ended at “the Park of Dr. Houghan, where the Barbecue had been prepared,” the Journal said. Wilson’s letter says the march ended at “the grove at the East of town,” but he seems to have been mistaken. Houghan’s property, which included a grove of elm, walnut and maple trees, is now Edwards Place, which at the time was on Springfield’s northern edge.

From 1 to 6 p.m., the crowd enjoyed the barbecue and listened to speeches by at least eight orators. (Only one was from Sangamon County; his name is illegible in reproductions of the Journal story, but seems to have been either Hay or May.) According to the newspaper:

The tables were loaded with the plain and substantial fare, which is found in our Log Cabins, and for which the long march had given to the appetites a keen relish. Ample justice was done to those tables, as is fairly estimated, by more than 15,000 persons.

Abraham Lincoln is not mentioned in reports of the Springfield rally. However, in June 1840, Lincoln was seeking his fourth term in the Illinois House of Representatives (he won re-election two months later), and it seems inconceivable that he would have skipped the meeting.

William Wilson, the writer of the letter, was a Whig, but was “never politically active,” according to his biography at Illinoiscourts.gov. The Illinois General Assembly elected him to the Supreme Court in 1819 and then named him chief justice in 1825. He retired in 1848 and still holds the record for longest consecutive service as chief justice.

Below is William Wilson’s letter to his wife Mary, as transcribed in about 1937. Thanks to Barry Cleveland of Crossville, Ill., Wilson’s great-great-great-grandson, who forwarded the transcription to the Sangamon County Historical Society in August 2017.

The original handwritten letter is in the Abraham Lincoln Presidential Library. Spelling and punctuation here are unchanged from the 1937 transcription; words in brackets or left blank are indecipherable in the original.

I am tempted by the opportunity of Mr Hays return to write you a few lines tho I wrote you immediately on my arrival. I can not give you an idea of what is now passing here, nothing like it has ever occurred in this state, and except the gathering at Tipacanoe nothing in the west. That meeting I am told by Doctor Todd, Judge Huntington (of Indiana) & others who are just from there was probably more numerous, but for arrangement, display, & imposing appearance it was far behind what was exhibited here yesterday & today. There were in the procession (which paraded in the [parade?] out by Ilses) 9670 on foot in platoons of ______, 250 odd of them ware soldiers of Harrisons & and marched in front with a fine band of musick 260 carriages, wagons & other vehichles filled to overflowing followed next & then a large concours accompanied the procession through the town, to the grove at the East of the town. In all it is believed there ware at least 15000 persons there was a full rigged frigate on the wheels of a large wagon brought from Chicago, a steamboat carried in the same way and dozens of canoes with 60 or 70 persons in them several drawn by 6 white horses, log cabins drawn in the same way.

There was a full sized likeness of gen. Harrison painted by an artist here from life carried in procession. There was in all 152 banners carried by the different delagations some very large and handsom, some ware caricatures well painted on silk and canvass, others quaint & curious +c. The meeting which we noticed having takin place at St. Louis was not half as large as this, & nothing like so imposing, this I am told by gentlemen from there. There was more than 1000 horseman, all distinguished by large silk sashes worn round the shoulders & waiste. The whole of the parade [Parara] between Ileses (on the hill where the Lombardy trees are) & the town was covered with the tents of the delegates & all the houses filled to overflowing by the strangers. The accounts of the great changes taking place in every quarter, have inspired the whigs with the most undouting confidence of success. I have retired to the court room to write you this, every other house, & the streets are wedged full, but I can say no more at present. I hope to amuse you with a detail of all that has occurred when I have the pleasure of meeting you again, this I hope will be in about 3 weeks as the lawyers are generally disposed to continue their causes. Neither our court nor that of the U. States having been able to do any business yet. I am quite well and hope that this will find my dear Mary, mother & children well & happy, do take care of yourself & write to me. God bless you my dearest.

This entry was posted in Celebrations, Politics, Prominent figures, Spectacles. Bookmark the permalink.