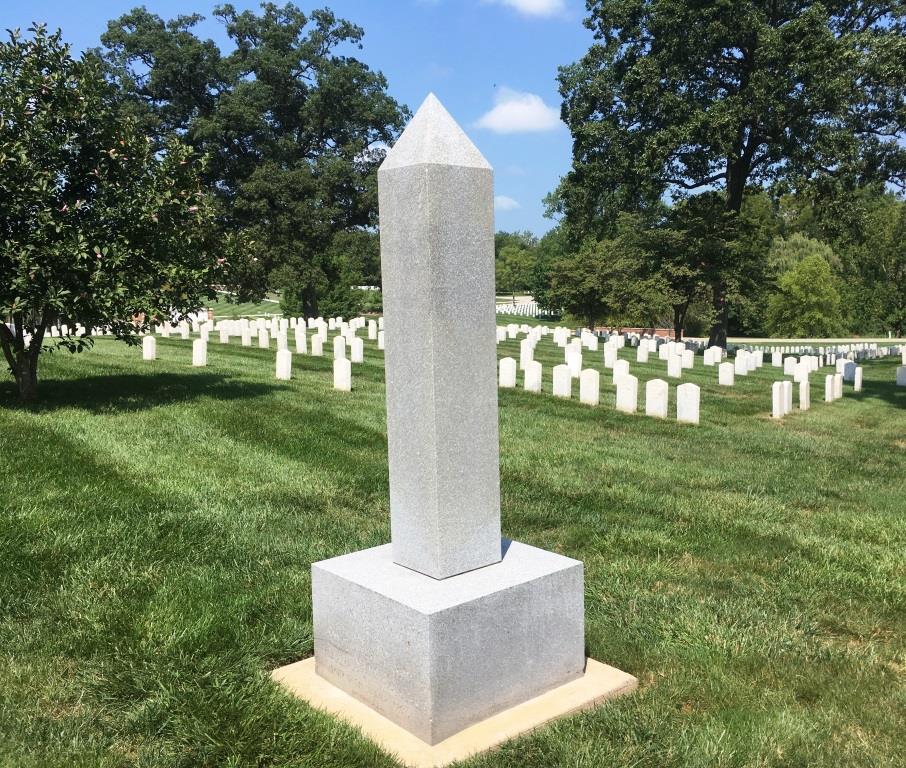 The Confederate Monument has marked the graves of Confederate soldiers at Camp Butler since 2005. (SCHS photo)

Note:  Camp Butler itself (see link below) describes its Confederate obelisk as a “monument.” However, it probably is more accurate to call it a “memorial,” because the obelisk was erected, as its inscription says, in memory of  Confederate soldiers buried there. The difference is explained here. Also, Gary Shapiro, professor of philosophy at the University of Richmond, went into more detail in a New York Times op-ed. This entry, including its title (originally “Sangamon County’s Confederate monument”), has been edited to reflect that understanding.

Sangamon County’s only Confederate memorial is a 7-foot-tall obelisk erected in the middle of the Confederate burial section at Camp Butler National Cemetery in December 2005.

Sponsors of the memorial, according to an inscription on the base, were: The United Daughters of the Confederacy; Seven Confederate Knights Chapter 2625; Illinois Division, Sons of Confederate Veterans; Illinois Society, Military Order of the Stars & Bars; and the Order of the Southern Cross.

The inscription on the obelisk’s front base says:

In memory of the Confederate veterans who died at the Camp Butler Confederate prison camp. May they never be forgotten.

Camp Butler opened in August 1861 as a training camp for the Union Army, but was converted to a prisoner-of-war facility in 1862. The first 2,000 prisoners arrived at Camp Butler in February 1862, following the Union Army’s conquest of Fort Donelson, Tenn. Another 1,000 arrived after the capture of Island No. 10 (Missouri) in April. Prisoner exchanges emptied the camp by October, but an estimated 1,665 new Confederates were sent to Camp Butler in early 1863.

Barracks were often full, forcing prisoners to live in tents. Illness reached epidemic proportions – pneumonia was a constant problem. When the last Confederate prisoners departed on May 19, 1863, more than 800 of their comrades had been buried in the prison cemetery, victims of inadequate facilities, poor sanitation, and disease.

The Confederate gravestones can be distinguished by their pointed tops. Gravestones for the rest of the 20,000 veterans and their spouses buried at Camp Butler are rounded.

When the Daughters of the Confederacy and other groups planned the dedication of the obelisk, they originally intended to display the Confederate flag during the ceremony. Facing objections from the NAACP, the Anti-Defamation League and other civil rights groups, however, the ceremony organizers decided not to request a permit to show the flag. Confederate flags are banned from display in national cemeteries except in specific circumstances.

In addition to the 800-some burials at Camp Butler, at least two dozen Confederate veterans of the Civil War are buried elsewhere in Sangamon County.

The most prominent probably was Andrew Jackson Butler (1827-1902), a Virginian who moved to Illinois in 1869. According to his biography in the 1904 Past and Present of the City of Springfield and Sangamon County (repeated on his Findagrave site), Barber served as purchasing agent for famed Confederate Gen. Stonewall Jackson, rising to the rank of major.

Barber moved in 1869 to Sangamon County, where he operated a prosperous stock farm near Cantrall. He is buried in Fancy Creek Cemetery. Andrew Jackson Barber’s two sons, John and Clayton, founded the Springfield law firm that now is Barber Segatto Hoffee Wilke & Cate.

This entry was posted in Historic Sites, Markers, Military. Bookmark the permalink.