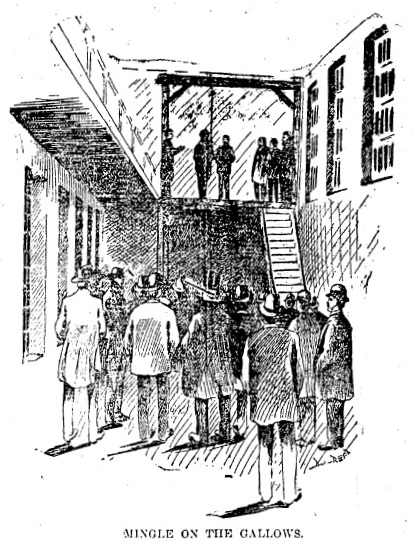 This drawing shows the west corridor of the Sangamon County Jail, where three county executions took place. It was published in the Illinois State Register after James Mingle was hanged on Feb. 11, 1898. See below for other depictions of people connected to the case. (State Journal-Register; published with permission)

Sangamon County put to death seven men, all convicted of murder, between 1826, five years after the county was established, and 1927, when a new state law required executions to be carried out in state prisons. Those hanged were:

Van Noy beat his wife to death in a “fit of drunken frenzy” at their home (the site is now in Menard County, but was part of Sangamon County at the time) and was quickly convicted and sentenced to death.

“Almost the entire community” watched the hanging, which took place in an open field just south of the site of today’s Statehouse, historian John Carroll Power wrote. Surgeons started to dissect the body in public, but Power reported the spectacle was so revolting that they were forced to move to private quarters.

The case is remembered mainly because Van Noy hoped to be revived after the hanging. See Hanging of Nathaniel Van Noy, 1826.

The hangings of Vanarsdale, 19, and Lemon, 20, both convicted of participating in the murder of John Sanders on March 7, 1865, were  Sangamon County’s only double execution.

The two admitted being part of what the Illinois State Journal called “a gang of abandoned young men” who decided to rob James Bodge’s store in Pawnee on the grounds that, since the community had no bank, Bodge would have to have a large amount of cash on hand.

In the middle of the stickup, Sanders entered the store to make a purchase. When he realized a robbery was in progress, he ran outside, where Vanarsdale shot him. Sanders ran a few feet, collapsed and died.

Vanarsdale and another robber, Matthew Ballard, decamped to Iowa, where Vanarsdale was arrested two months later for “bushwhacking.” He confessed and apparently identified his accomplices. Lemon, arrested in Sangamon County, also confessed to being part of the robbery gang.

Ballard had been with Vanarsdale, but escaped arrest because he was foraging for food when searchers apprehended Vanarsdale. He apparently was never found. A fourth participant, a man identified only as “Crawford,” was killed in Decatur sometime between the robbery and Vanarsdale’s arrest, the Journal said.

Many people, the Journal said, sympathized with Lemon and Vanarsdale because of their ages and their apparent remorse. Supporters sought to have the death sentences commuted, but Gov. Richard Oglesby denied the request.

Vanarsdale and Lemon were hanged in a small building specially constructed for the purpose in the yard of the Sangamon County Jail, then on the southwest corner of Seventh and Jefferson streets.

A dozen official witnesses were the only people admitted to view the executions. However, several hundred people gathered outside the jail, and “(t)he roofs of several houses in the vicinity of the jail were covered with those who seemed to have no end in view, but to stare and wait for the intelligence that the men were hung,” the Journal said. Sheriff William Crafton had 50 special deputies surround the jail for security.

The Journal outlined how the gallows was set up.

The scaffold was raised about eight feet from the ground. At the south side is a trap about six feet by four, fastened to the floor on one side by hinges, and supported below by three props, resting against a beam in which notches have been cut. By moving a concealed lever, this beam is withdrawn in such a manner that the props come opposite the notches, and finding there no support, the drop falls.

The length of the ropes … over the “drop” allowed the prisoner to fall a distance of about four feet.

The two were buried on the grounds of today’s Illinois State Fairgrounds, part of which was then the county poor farm. John Sanders’ grave is in Horse Creek Cemetery near Pawnee. 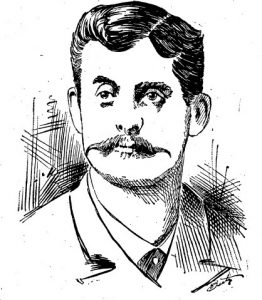 Mingle was convicted of bludgeoning to death Dollie Briscoe, the 18-month-old daughter of Mingle’s sometime mistress, Mary Briscoe. (The toddler might have been Mingle’s daughter, although Briscoe later denied it. Briscoe apparently worked periodically as a prostitute.)

The couple had a history of quarrels, and Briscoe had thrown Mingle out of her shabby home on East Jefferson Street, the heart of Springfield’s “Levee” vice district, several weeks before the crime. She then took up with another man, witnesses said.

Mingle was convicted of attacking Mary and Dollie with an ax as they lay in bed on July 27, 1897. Dollie Briscoe’s head was crushed by an ax stroke. Mary Briscoe suffered massive head injuries as well; her skull was split open, part of her brain protruded from her head, and brain tissue was found on the ax and the bed. Somehow, however, she recovered after several months of treatment. 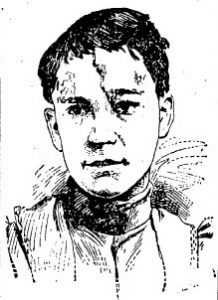 At trial, Mingle’s defense claimed the murderer actually was Briscoe’s new boyfriend. Following conviction, his appeals for clemency were based on claims that Mingle was both drunk and insane when he attacked Briscoe and her daughter.

Mingle’s execution took place inside the west corridor of the jail. Again, only about a dozen people were admitted to the jail as official witnesses, but the Illinois State Register – which reported the execution in a “special extra” edition – said an “immense crowd” surrounded the building and took position on nearby rooftops.

When Mingle would stand in his cell and the people could see him waving his handkerchief everybody would rise on tip toe, give vent to rediculous (sic) expressions of satisfaction. Each one declared that he knew Mingle and swelled up with pride as he declared that Mingle had recognized him and was waving at him individually. One man said that if he had been in Mingle’s place he would not have eaten anything and by the time of the execution he would have been so skinny that he could have crawled out between the bars and made his escape.

“Mingle went to the gallows without the least tremor of a nerve, died a game man, and asserted his innocence to the last …” the Register story said. 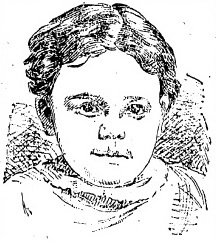 A woman identified as Mrs. Lou Connors organized a funeral for Dollie. “A large concourse” of people attended services at Bisch & Irvine’s funeral parlor, the Register said, and the girl was buried at Oak Ridge Cemetery. According to an 1899 newspaper story, her gravestone identified her as Dollie Briscoe Mingle. The story said Mary Briscoe had vowed to have “Mingle” removed from the tombstone on the grounds that Mingle was not the girl’s father.

Information on when and where Mary Briscoe Reynolds died is not available. 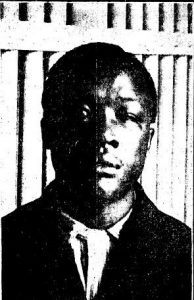 James was one of two African-Americans whose arrests sparked the Springfield Race Riot of August 1908. James was convicted, largely on circumstantial evidence, of murdering mining engineer Clergy Ballard in Ballard’s home on July 5, 1908. He confessed to the murder the day before he was executed, saying, “Drunkenness was the cause of it.”

James also was hanged in the west corridor of the jail. In contrast to the previous three hangings, where only a few official witnesses were allowed to watch, about 200 people crowded into the corridor to see James die. After being embalmed, James’ body was laid out at McCabe and Gaa undertaking parlor, and an estimated 7,000 people paraded through the business to view the corpse. Local newspapers called the viewing “morbid” and a “shocking spectacle.”

James’ body was returned home to Alabama for burial. He is the only African-American ever executed in Sangamon County.

Read more about James and the race riot here. 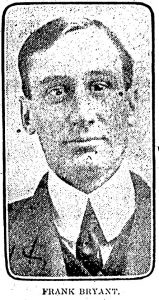 Bryant, about 25, also known as “Squint” Sullivan, was sentenced to death for bludgeoning to death his elderly roommate, “Uncle Tom” Brady, while Brady slept on Aug. 23, 1908.

Bryant and Brady lived at The Helping Hand, a secondhand store at 915 E. Washington St. where both worked. Prosecutors said Bryant stole $14.50 stashed in Brady’s trunk in order to finance a trip to Chicago, where he hoped to woo one Charlotte Nelson. Bryant had met Nelson while she worked in Springfield for the Volunteers of America, a church-based social service group that still exists today.

It isn’t clear if Nelson reciprocated Bryant’s infatuation, although he reportedly was arrested in Chicago while talking to her the day after the murder. She also sent him a Bible after Brady received his death sentence.

Brady never denied the killing, although he claimed not to remember it. At his trial in October, he pleaded insanity. Jurors quickly found him guilty, but it then took 17 hours for them to decide Bryant should be put to death. Coincidentally, Bryant’s sentence was announced in the Illinois State Journal on Oct. 23, 1908, the day Joe James was executed.

Bryant had been orphaned as an infant and lived at the Home for the Friendless until about age 9. An uncle found him a foster home with a Mrs. Sullivan, where he lived until about age 18. In the meantime, however, he was expelled from two different schools and spent some time in the reformatory at Pontiac. He said later he lost an eye when a Pontiac attendant beat him with a club.

Bryant’s execution again took place in the west corridor of the jail. Aside from jail personnel and clergy, only the 12 official witnesses were present, in contrast to the 200-some who watched James die a few months earlier. Also in contrast to the James spectacle, police did not allow the public to view Bryant’s corpse at the McCabe and Gaa undertaking parlor.

Bryant is buried at Calvary Cemetery. 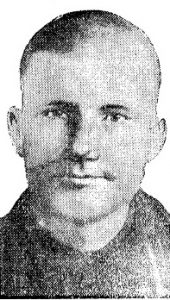 Hayes was executed for killing his former employer, Dolly Flatt of the Berlin area. Flatt had fired Hayes for paying “unwelcome attentions” to Flatt’s 12-year-old daughter.

When Hayes was hanged, the state of Illinois had already enacted a law requiring death sentences to be carried out by electrocution in state prisons. However, the law applied only to crimes committed after July 1, 1927; Hayes killed Flatt on May 24, 1927.

Hayes was hanged in the yard of the county jail, but canvas screens kept onlookers – about 1,000 people had gathered outside the jail – from seeing the event. Hayes’ body was taken to Mound City for burial.

This entry was posted in Crime and vice, Law enforcement, Sangamon County. Bookmark the permalink.