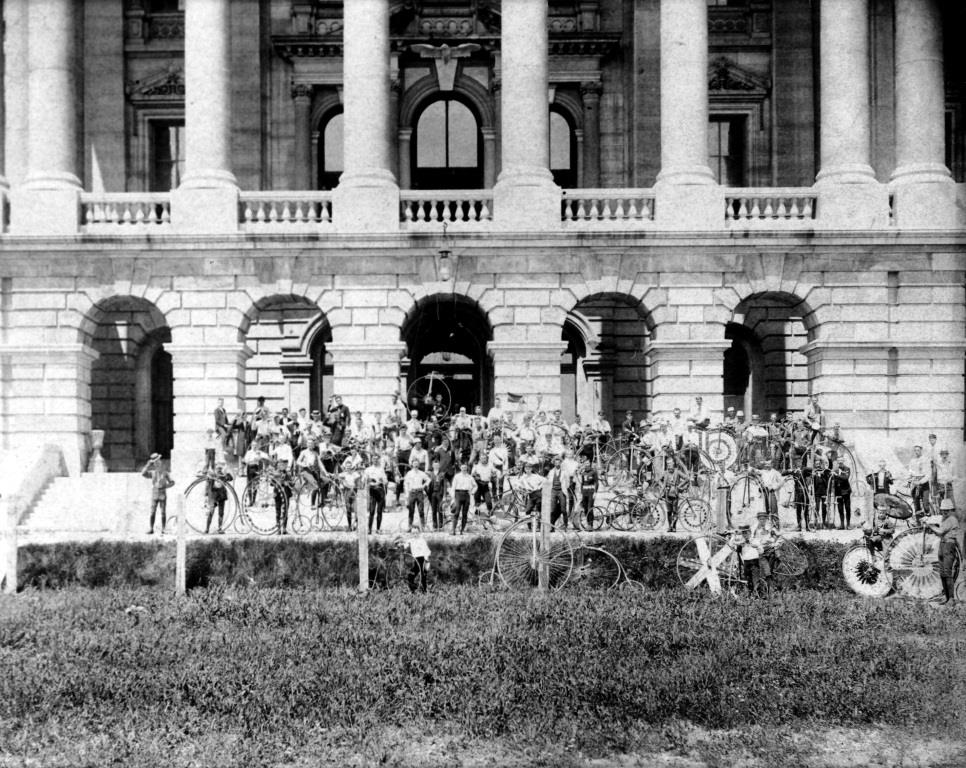 A group of riders at the Statehouse during the 1891 state League of American Wheelmen meet. Note the high-wheel bicycles, several with decorated wheels. (Sangamon Valley Collection)

Springfield “wheelmen” organized the Capital City Cycling Club in the fall of 1887 to sponsor a variety of bicycling events, foster competition among local riders and, from time to time, bring professional cycling matches to the area. The club affiliated with the League of American Wheelmen in November 1887, when it also adopted the league’s uniform – “black suit, knee pants and flag of purple and old gold” – and announced its first outing – a “hare and hounds race,” starting from the south side of what now is the Old Capitol square, on Thanksgiving Day.

(Despite use of the term “wheelmen,” the Springfield club invited women to ride in parades and recreational jaunts, and at least one woman belonged to the Capital City Cycling Club very early in its existence. See below.)

Mr. Barnes laughingly recalled the applause from the sidelines as the members of the cycling club, holding red flares in their hands, rode through the streets, steering their bicycles with their feet. Those who did not ride a bicycle looked upon the riding of a wheel without touching the hands to the handlebars as quite a stunt.

The club enticed the Illinois division of the League of American Wheelmen to hold its annual meet in Springfield on July 3, 1888. The highlight was a “grand parade” in the evening, described by the Illinois State Register.

The parade of the wheelmen last night was very pretty. One hundred wheels were in line, many of them being very handsomely decorated. Several of the riders wore comical costumes, and a large number of them carried Chinese lanterns. The leader carried a large colored light. The procession, which started from the state house … was witnessed by thousands of people, the sidewalks along the square being crowded. At intervals along the line of march colored lights were burning, which added greatly to the effect of the parade.

Competitive events in 1888 were held at Butler’s Driving Park, which was near the intersection of  Gehlman (now MacArthur Boulevard) and Laurel streets. The park, a track normally used for harness racing, was part of a farm belonging to H.W. Butler (1840-1915), a horse breeder and politician. Several thousand spectators watched the bicycle races, the Register said. 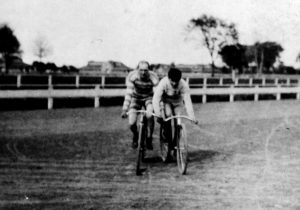 Most of the contests – “one-mile races, half-mile races, slow races, … etc.” – were for old-style high-wheel bikes, but one race was designated only for “safety bicycles,” bikes more similar to today’s two-wheelers. (They were called “safety bikes” because riders were less likely to be injured by being pitched head-first over the front wheel, a problem with the high-wheel versions.) George Thorne of Chicago took first place in that race, even though he was required to start behind the other three racers. Thorne’s bicycle had pneumatic tires; the others all rode on solid rubber.

A unicycle race drew only one entrant, a Peorian who won by default, finishing the one-mile course in 4½ minutes.

Some spectators apparently were disappointed that no members of the Springfield club entered any of the races. In a statement, the club said “it was not deemed courteous for the local wheelmen to contest for the prizes.”

In a story published in advance, the Register suggested the visiting wheelmen might want to trek to see such points of interest as the Illinois Watch Co., the Springfield Rolling Mills, Lincoln’s Tomb and the state Capitol. The paper added:

“For those wishing to test their hill climbing prowess, we can offer ‘Brainard’s (sic) Hill,’ which has only been climbed by the best of riders.”

The hill was on the official itinerary of another bicycle meet, held at the Illinois State Fairgrounds in 1896. The opening of the meet involved an eight-hour, 140-mile relay ride from Quincy to Springfield. Brainerd Hill marked the start of the relay’s two-mile final leg, which concluded with presentation of a proclamation to Mayor Marion Woodruff at city hall.

Brainerd Hill notwithstanding, riding conditions had improved dramatically by 1896, according to a 1920 interview of an original cycling club member, Ed Hofferkamp.

In recalling a State Bicycle Meet held in this City in 1891 it is remembered by Ed Hofferkamp that there was no little complaint from visitors then about the rough streets and those complaints were well grounded. With the exception of a very few blocks, the pavements were of cedar and were thickly indented with holes, making it injurious to wheels and disagreeable for the rider.

In 1896 some 10 or 15 miles of the leading thoroughfares had been smoothly paved with brick over which riding became a pleasure. One delightful stretch was from South Grand Avenue north on Sixth to North Grand Avenue, and thence to the State Fair Grounds. That was the most popular course in the city.

“Men who rode high bicycles years ago were the first agitators for good roads,” Emil Smith wrote in his December 1930 column.

When bicycle riding was at its height nearly every city of any size had a cycling club and these clubs were affiliated with the League of American Wheelmen. This league published a magazine which constantly pounded on the subject of improved roads.  In Illinois, Will A. Connelly pioneered as an advocate of hard road legislation proposed by the wheelmen.

In an earlier column, Smith had identified Sarah “Sadie” Smith Woodruff (1870-1965) as the first female bike rider in Springfield. She took up riding in about 1888, Smith wrote.

In those days, bicycles for girls and women were known as safeties. Men rode bikes with a big front wheel and a small back wheel. Mrs. Woodruff would ride with members of the Capital City Cycling Club, and she had great difficulty in making herself heard when she talked to her male companions, mounted on their high bicycles. The wheel she rode cost $75, which was a large sum of money to invest in a pleasure vehicle in that period.

(Sadie Smith later married Marion Woodruff, the mayor who received the proclamation from the 1896 bike relay.)

The Capital City Cycling Club seems to have gone out of existence in the early 1920s. Lawrence Avenue remained steep enough as late as June 1946 that two 13-year-old girls were injured when they lost control of their bike and crashed. Lawrence, however, has been regraded over the years, removing the street’s challenge for bicycle riders.

The name “Brainerd Hill” has been forgotten, but it still provides thrills. Its last vestiges make up the popular sledding hill at Pasfield Golf Course.