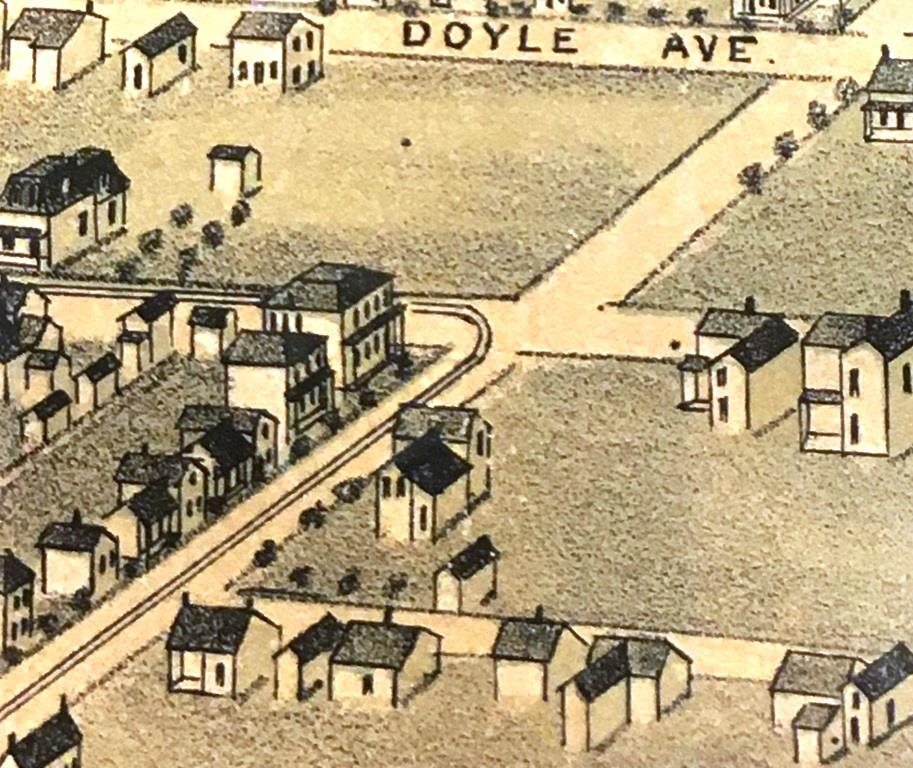 Walnut Street runs left to right in this image from an 1873 birds-eye map of Springfield. A street car line runs west on Monroe and turns south on Walnut. The skating rink, demolished by a windstorm a year earlier, presumably was on the vacant lot between Walnut and Doyle (now Glenwood) Avenue. Original map can be seen at Lincoln Library’s Sangamon Valley Collection. (SCHS photo)

This entry has been revised — ed.

Springfield’s first ice rink hosted skating contests, floral exhibits, masked balls and the “Knights of the Skate” during its brief existence at Walnut and Monroe streets.

“The rink,” as it was simply known, opened in 1868 with some warm-weather activities – a couple of political rallies and a banquet held to mark the laying of the Statehouse cornerstone. By Dec. 10, 1868, however, the weather was cold enough that it “could be used in its proper capacity,” the Illinois State Register reported.

The rink building, 200 feet by 84 feet, occupied a full block along Walnut Street, probably on the west side, between Monroe Street and Market Street (now Capitol Avenue). It was mostly unheated, for obvious reasons, although dozens of gas lights allowed skating at night, when the rink was most popular. Special street cars ran regularly from Fifth and Monroe streets (later known as “Dodds Corner”) to the rink.

The ice was surrounded by a viewing platform, also unheated, but the separate men’s and women’s dressing rooms “were abundantly heated,” the Register reported in its Dec. 11, 1868 review of opening night.

Last evening, at an early hour, the street cars were filled with gay groups, and parties on their way to partake of the amusement of the occasion, and the rink was soon a scene of animation such, as we believe, has never before been witnessed in Springfield. Butler’s band gave forth its most inspiring notes, the ice reflected the rays of a hundred or more jets of gas, while upon the smooth surface the skaters flew, spun or tumbled, according as practice, skill, caprice or inexperience dictated.

The Register estimated opening-night patronage at 1,000 people, about 250 of them skaters. The story was optimistic about the rink’s future.

(T)he managers have made every necessary arrangement to comfortably accommodate the large attendance which may reasonably be expected. Butler’s Band will perform afternoon and evening, until further notice, and it is probable other dressing rooms will be arranged, or perhaps stoves placed on the platforms, and in short, everything to keep the rink as it now undoubtedly is, the most fashionable and popular resort of the city.

Indeed, the rink seems to have been popular for the next three years, helped by a generous advertising budget and what appears to have been systematic payola for newspaper staffers. Well, some newspaper staffers: In January 1869, the Register published a complaint from “one of the leading correspondents of this city” that neither he nor his family had been offered complimentary admission to the rink, despite the “numerous notices” he had published about the venue.

The rink’s owners – a dozen prominent citizens invested in the rink, but the original managing partners apparently were John M. Snyder, Lincoln Dubois and H. Wirt Butler – responded that the correspondent and his family (“total present for duty, eight”) could have season tickets at regular prices. The story went on:

Further, it was stated, that sooner than give the leading correspondent a season ticket, the management would see him –. They really did. They said they would see him in that unpleasant extremity first. In consequence of which the rink has not been the subject of any more “numerous notices,” and the festivities remain unillumined by a ray of light, except from the gas burners.

Nationally known skaters performed exhibitions at the rink, and local skating races and competitions for both men and women were frequent attractions.

Other events were more elaborate, like a masked ball held at the rink on Jan. 8, 1870. “We are informed that a number of ladies and gentlemen have prepared elegant and striking costumes for this occasion,” the Register reported. Four days later, the “Knights of the Skate” squared off in a skating tournament to benefit a Confederate widows’ and orphans’ home in Lauderdale, Miss.

The rink continued to sponsor events through at least February 1871, but the building had begun to deteriorate, and it never reopened for the 1871-72 winter season.

That may have been just as well. A violent windstorm struck Springfield at 9 p.m. Saturday, Dec. 23, 1871, demolishing the new Springfield rolling mill and a railroad roundhouse in addition to the empty rink building. If the facility had been operating, hundreds of skaters and onlookers might have been in jeopardy. The Illinois State Journal talked to an eyewitness.

A gentleman who was within about forty yards of the building at the time it fell says that it reeled for a moment and then went down with a crash, making the destruction of the building complete. The skating rink was erected in 1867 at a cost to the company of $12,000, and for two or three seasons thereafter it was a fashionable place of resort. The building was not in good repair, and has not been open the present winter. It is fortunate that the building fell in the direction that it did, for otherwise it might have damaged several residences in the vicinity.

In the absence of the rink, young men organized skating parties on local ponds. Meanwhile, the last remnants of the rink building were sold in March 1872 to Jacob Loose, one of Springfield’s first coal mine entrepreneurs, who, the Register reported, “is going to use the lumber to build a town.”

This entry was posted in Amusements, Buildings, Social life, Sports and recreation, Uncategorized. Bookmark the permalink.