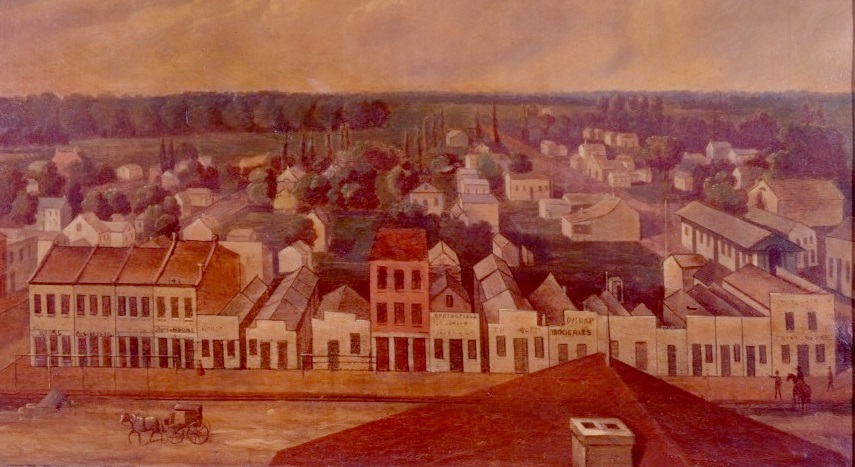 The 100 block of North Fifth Street, where John S. Condell and his partners first set up shop in Springfield, can barely be seen to the left of this view of the north side of the square in the 1850s. For more on this painting and its three companion works, see “1850s’ Springfield, in four mysterious paintings.”

John S. Condell Sr. (1818-1907), born in Ireland, arrived in Springfield by way of Philadelphia and Carrollton in 1841. Condell was one of Springfield’s pioneer merchants, operating stores on the downtown square for more than 40 years. One of his partners was C.M. Smith, Abraham Lincoln’s brother-in-law and an early owner of what now is the Vachel Lindsay Home State Historic Site. Condell himself was “an intimate friend of Abraham Lincoln,” according to his obituary.

Condell is best remembered today as the owner of the Condell House, 605 S. Fourth St., named in 2015 as one of Illinois’ most endangered historic sites. The building originated as the annex to the First Methodist Episcopal Church; Condell had it moved to its present location in 1852 and lived there until his death 55 years later.

The following excerpt is from Condell’s reminiscence of his move to Springfield. It originally was published in History of Sangamon County, Illinois, (no author given), Interstate Publishing Co., 1881 (page 183). Ellipses are omitted for readability.

In the summer of 1833, being then fifteen years old, I left the paternal home, in Philadelphia, and in company with my oldest brother (Thomas Condell), started for Illinois, which was then called “The Far West.” As it was before the days of railroads, we traveled all the way over the mountains to Pittsburg (sic), and thence to Cincinnati, in the old fashioned stage coaches.

At Cincinnati we embarked on a steamboat for St. Louis. Below Louisville there were but few towns or improvements on the river. I can never forget, neither can I describe, how strangely I was impressed by the wildness and grandeur of the scenery on the river, before it had been molested by the touch of man. The primeval forests crowded and covered the banks, and the surface of the stream was the home of wild fowl of every description. A peculiar stillness brooded over the scene, broken only by the splashing of the steamer’s wheel and the jolly song of the firemen. Seldom was there any occasion for our boat to stop, except to “wood up.” Then we would take a ramble through the wild woods, gathering nuts, grapes, plums, paw-paws and flowers.

(The Condells settled in Carrollton, where they opened a store. Seven years later, however, they began looking for a more profitable location.)

In the fall of 1840 my brother Thomas and myself left Carrollton in a buggy, with a view of looking for a better location for business. We started north, visiting Jacksonville, Springfield, Decatur and Bloomington. Finally, we decided to make Springfield our permanent home, and try to do business on the cash principle, under the firm name of Condell, Jones & Co. We moved to Springfield in August, 1841. We had difficulty in finding a house to do business in, but finally rented one of the stores in “Hoffman’s Row,” North Fifth Street, and soon after we purchased of Mr. Blankinship the building still standing on the northwest corner of the north side of the square, and continued doing business in it twenty-one years. It was the first brick building on the north side; all the rest were mostly one-story frame structures, and known in those days as “Chicken row.” It then required six or more weeks to get goods transported from the East. They had to be wagoned over the mountains to Pittsburg; thence by steamboats to St. Louis and Beardstown, and from thence to this city by transient teams. As but little manufacturing was then in existence in the United States, we were dependent upon foreign markets for most of our goods; hence, nearly all the dry goods we first sold here were of English manufacture. Muslins and calicoes, which we are now selling at six and eight cents per yard, were then sold at 25 to 37½ cents per yard. Most of the woolen goods then used here were spun and woven by the women of Sangamon and adjoining counties. Jeans, flannels, linseys, socks, mittens, rag carpets, tow linen, men’s straw hats, etc., were brought to the stores in abundance, and exchanged for groceries and other goods.

Peter Cartwright, the old pioneer preacher, who was a life-long customer of ours, never wanted anything out of a store but a black silk cravat and a bandana silk pocket handkerchief; all the rest of his wardrobe was the product of the labor and skill of the pioneer women of Sangamon county.

While waiting for the first stock of goods to arrive, I went to the first camp-meeting I ever attended, then being held on the Old Salem camp ground, six miles west of this city. The first day I went there I found I was a stranger among strangers, and as night came on, having made no acquaintance, and being somewhat timid and backward, I got no supper and had no place to sleep. After the night services closed, I thought I would make my bed on the straw about the preaching stand; but while sauntering around I found an old empty log school house, which formed a part of the inclosure, and into it I went to pass the night alone. On one of the puncheon benches I found a soft hat, and lying down upon the bench I placed the hat under my head for a pillow and went to sleep with the intention of rising before any one else would be stirring around, and see where I had made my resting place; but being tired, I slept so soundly, that when I awoke the sun was two hours high, and I discovered a boy sitting upon the doorstep patiently waiting for his hat, which was under my head.

There was a young lady from Williamsport, State of Maryland, at that meeting, with the family of Judge Swingley, to whom three years after I was marked, although at that time I had not the remotest idea of what the future had in store for me. I had no thought of matrimony then, and was only interested in the progress of the meeting. In those days there was more weeping and rejoicing at camp meeting than we see now. I wept with those who wept, and rejoiced with those who rejoiced, and wished the meeting would last all summer.

The spring and summer of 1844 will be remembered by many as one of the most gloomy and disastrous seasons that Sangamon county ever passed through. It rained almost incessantly all through the spring, until some time in June. The whole country was flooded with water. What little corn had been planted was mostly drowned out, and vegetation wore a sickly hue. It was a year of short crops, long faces and general depression. Dullness prevailed, and business men had more leisure than they knew what to do with. However, I turned it to good account, improving the leisure and enlivening the dullness by a courtship, resulting in securing a partnership for life.

In the face of all the discouraging prospects, all the shaking of heads and forebodings of evil, I was married on the 27th day of June, 1844, to Miss Bell Rice, at the residence of her brother-in-law, Judge Samuel K. Swingley, six miles south of Springfield. In going to and returning from the wedding, we found all the prairie from town to Lick creek timber covered with a sheet of water, and much of the way it was hub deep. That event proved to be the wisest proceeding of my life, and I close these recollections of the past by advising young men to go and do likewise.