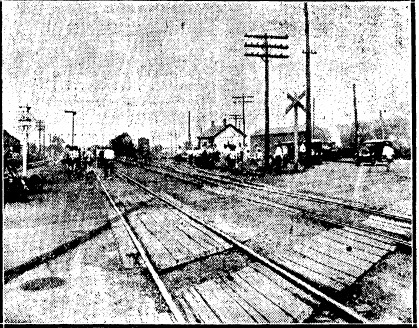 “Deadman’s Crossing” the day Arthur and Laura Withrow were killed in 1928. (State Journal-Register; used with permission)

The railroad intersection at 16th Street and Sangamon Avenue earned the nickname “Deadman’s Crossing” in the years before an underpass was built to route traffic below the train tracks.

At least 16 people were killed at the crossing between 1903 and construction of the underpass in 1935, many in gruesome fashion.

In the worst accident, four young people died after their car struck a passenger train at the crossing early on June 24, 1928. Another car-train collision on July 29, 1916, killed two young parents; their children, ages 4 and 18 months, somehow survived.

Other victims included coal miners who used the tracks – and sometimes hopped the trains themselves – to reach mines in the Devereux Heights area. Some of those killed were people walking alongside the tracks who simply didn’t realize trains were approaching.

The crossing’s danger was accentuated by switch engines going in and out of the nearby Chicago & Alton Railroad yards and by the fact that the crossing was shared by the C&A and the Chicago, Peoria and St. Louis railroad (later the Chicago & Illinois Midland). Several of the fatal accidents were blamed on multiple trains using the intersection simultaneously.

“Deadman’s Crossing” was the focal point of a 1930 push for a referendum to build subways, as underpasses were called at the time, at 16th and Sangamon, 10th Street and South Grand Avenue, 19th and Cook streets, and on Cook Street at the “belt line” east of Springfield.

The $600,000 proposal passed easily on June 24, 1930, in the same referendum in which voters agreed the city should build Lake Springfield. Half the $250,000 cost of building the Sangamon Avenue underpass came from the railroads, while the city of Springfield and Sangamon County each contributed one-quarter. 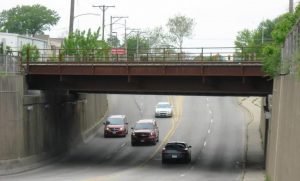 The underpass was dedicated on April 24, 1935. Mayor John “Buddy” Kapp, “wielding a razor blade of the patented ‘safety’ type, whacked the red-white-and-blue bunting and string stretched across the road, and the traffic began to use the subway,” the Illinois State Journal reported.

Among those attending the dedication was Leland Hotel bartender John P. Maloney, who lived a block from Deadman’s Crossing on Sangamon. He had been foreman of a coroner’s jury that investigated the 1916 death of crossing flagman Thomas Clarke. That jury recommended 24-hour crossing gates, which were replaced by the underpass.

“This certainly is a wonderful improvement, and the north side really appreciates it,” Maloney said.

Overall, according to J. Paul Clayton, chairman of the committee that worked to pass the referendum, 105 people had been killed at railroad crossings in Springfield between 1909 and 1929.

“While the plan for four subway crossings in the city would not entirely eliminate the danger to life, it would do away with crossings where many of these 105 persons were killed, Mr. Clayton said,” the Journal reported on June 11, 1930.

(The following list is based on newspaper stories. It does not include deaths near 16th and Sangamon that did not involve the crossing itself. Examples include fatal accidents totally inside the train yards – there were several – and the deaths of half-brothers Stephen Zipanis and Kasten Mosteka, 8 and 10 years old respectively, who were struck by a train while playing on the tracks a half-mile north of Deadman’s Crossing.)

Oct. 21, 1903: Coal miner Joseph Wanagas (also spelled Vanagos) died after being struck by a train just north of the crossing. Wanagas apparently was crossing the tracks when hit. A coroner’s inquest found he was “trespassing on the right-of-way of the Chicago & Alton Railroad company.”

March 2, 1906: Mine engineer Michael Luicy was run down by a northbound C&A passenger train at the Sangamon Avenue crossing. There were no witnesses.

When Luicy was struck, his body was thrown beneath the wheels and both arms were almost completely severed from the body. His skull was fractured and his face was badly cut. When removed from beneath the wheels of the train, life was extinct.

Luicy was among three people killed by trains within 36 hours around the city, a Journal story said.

June 28, 1907: Another miner, John Krug, was standing on the rear platform of a car attached to a Chicago, Peoria & St. Louis excursion train when it rounded the curve at Sangamon Avenue. He died when his head struck a guard rail.

July 10, 1909: Miner Theodore Kulumbus was struck and killed by a C&A passenger train, apparently while trying to get out of the way of a switch engine. A coroner’s jury blamed the railroad, the Illinois State Register reported.

The verdict was one of the most scathing that has been given at an inquest in several years. It was repeatedly shown … that the company had taken little precaution in guarding the lives of pedestrians. It was shown that although several railroads cross Sangamon avenue at this point, no flagman was stationed there. This is especially regrettable, as it is a greatly traveled thoroughfare, many miners being required to cross the track to and from their work.

June 5, 1910: David Jenkins of Thayer died when he was hit by a C&A freight train at 16th and Sangamon. “Some (eyewitnesses) were of the opinion that Mr. Jenkins deliberately walked in front of the approaching freight, but others think he failed to see the train,” the Register said.

Sept. 11, 1910: Patrick Eagan was trying to board a CP&St.L freight train for a ride into the city, but slipped and fell under the wheels. Eagan had been a city police officer, but resigned to become a miner.

Jan. 5, 1913: Joe Rumzas, a zinc works employee, was killed by a C&A freight at the crossing. The Register reported:

The accident is said to have occurred while Rumpis (sic) was on his way to a saloon to get a bucket of beer. He was walking west and the train blocked his way across the tracks. He is thought to have become impatient and either climbed in between the cars or crawled under the trucks.

Rumzas’ body was “mutilated beyond recognition,” the story said.

Feb. 16, 1916: Agnes Baltruszes was killed when hit by a C&A switch engine. Baltruszes “stepped from behind a freight car on a side track directly in front of the engine,” the Journal said. 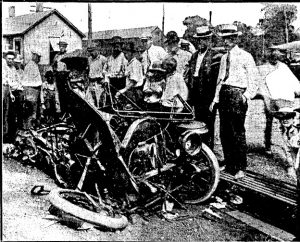 The Withrow car, which Arthur Withrow had bought only two weeks earlier, following the collision (SJR)

The Register, which published several stories about the incident the next day, reported that witnesses said a switch engine obscured Withrow’s view of the crossing.

(A)s soon as the freight cars were clear of the crossing, Withrow threw in his clutch and moved forward. He reached the center of the tracks. The passenger train shot up from the south. The pilot of the locomotive struck the automobile square and sent it whirling into the air.

Baby Virginia was taken from her mother’s arms on the iron work across the front of the locomotive, witnesses said. Mrs. Withrow was dead. The child was stunned but apparently uninjured.

Withrow’s body was hurled fifty yards and alighted near the tangled remnants of the machine. He was picked up dead.

Dorsey Withrow lay on the ground not far away, unconscious, but not hurt beyond painful bruises.

City Health and Safety Com. Roy Reece accused the C&A of ignoring Springfield’s speed limits for trains. He also called for crossing gates to be installed at 16th and Sangamon.

Sept. 17, 1916: Thomas Clarke, age 75, had been a CP&St.L flagman for only a few weeks when he was hit by a northbound freight and killed. Some witnesses said Clarke was standing on the tracks when struck; others said he stepped in front of the train.

March 31, 1926: Falling snow apparently obstructed the view of Amrhein Bakery truck driver August Rudin, whose truck was demolished by a southbound C&A passenger train. The train’s siren and bells were in use, authorities were told.

A coroner’s jury headed by Maloney recommended that the railroads institute 24-hour-a-day crossing gates. The gates were to be raised and lowered by watchmen, according to the recommendation.

June 24, 1928: There was still no full-time watchman at the crossing when a speeding Ford sedan struck a northbound C&A passenger train shortly before 1 a.m.

The auto, carrying two men and two women, was westbound on Sangamon Avenue. The two women, Phoebe Irwin and Helen Saner, died instantly, the Illinois State Journal reported. The men, Leonard James and John Cooley, both died later in local hospitals. All were in their 20s.

After hitting the train, the car glanced off and struck a hand-car which was standing on an adjoining track, about 25 feet away. Clothing, shoes and jewelry worn by occupants of the car were scattered along the right of way for a hundred feet after the crash.

A coroner’s jury was unable to place responsibility for the accident. However, according to testimony at the inquest, “The fulltime service of watchmen was started a few days after the accident,” the Journal said.

James’ wife, Helma, later sued the C&A as a result of the crash. Her suit was dismissed in 1931, partly because the pleadings referred to the intersection as “Dead Man’s Crossing.”

Railroad attorney William L. Patton, representing the railroad, argued it was improper to allege that the crossing “has been popularly designated as ‘Dead Man’s Crossing,’” the Journal reported.

This entry was posted in Local government, Railroads, Transportation, Uncategorized. Bookmark the permalink.