The nine-foot-tall grandfather clock that sits on the first floor of Lincoln Library was given to the library in 1936 by the widow of former Springfield School Superintendent J.H. Collins.

Collins, according to a bookmark available at the library that gives a short history of the clock, was “an enthusiastic believer in the importance of libraries.” Collins also had a “hobby” of always being on time, the bookmark says, “so the clock was a natural choice to show appreciation for his services.”

Not surprisingly in Springfield, however, the clock has a political backstory.

While superintendent, Collins oversaw construction of Central High School at 301 W. Adams St. (Note: address has been corrected.) He said in 1905 he had signed diplomas for nearly 1,200 graduates. Also, according to his obituary, Collins in 1890 “inaugurated the practice of giving eighth grade graduates a diploma. The innovation drew comment from throughout the United States.”

Both the new high school and the eighth-grade diplomas were inspired by a growing need for better educated workers, Collins said in his annual report for 1889, which was reported in the Illinois State Journal. In particular, the Wabash railroad had a new policy requiring apprentices to have gone at least through grammar school, Collins said in the report.

Prof. Collins remarked of the effect of this order that it has already been felt in our city schools. Boys who had left school have returned, and others who expected to stop at the end of the year have determined to complete the grammar school course. The Board of Education has had beautiful certificates, or diplomas, lithographed for pupils who complete the work of the eighth grade, and hereafter these will be delivered at the close of the school year to pupils who are entitled to them … with appropriate exercises.

Collins’ obituary added one more line about his educational philosophy: “He believed in ‘sparing the rod,’ and put this theory into practice.”

In 1905, Springfield School Board members were appointed by the city council. Collins was a Democrat, and Democrats controlled the council, but the local party had split, and Collins turned out to be on the wrong side. As a result, after the 1905 city elections, Mayor Harry Devereux and his cohorts on the council appointed three anti-Collins members to the school board. The school board then voted to fire Collins.

Six weeks later, when alumni of Springfield/Central High School held their annual reunion, the Illinois State Register reported, “the evening was devoted to addresses in praise of the work of Professor James H. Collins. … It was one of the most enjoyable reunions the alumni has ever held.” (Note that the Register got Collins’ first name wrong; he went by “J.H.,” but the “J” stood for “Joseph.”) 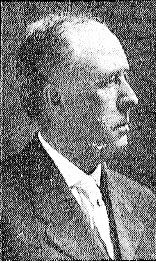 Prominent alumni made speeches honoring Collins, who the paper said was surprised and touched by the tributes. The clock presentation was made by Susan Wilcox, still Springfield High’s most famous teacher. The bookmark describes the clock:

The clock’s nine-foot mahogany case blends fluted columns with a mainly Chippendale style. The dial is silver on a copper plate. The face has a painted section showing phases of the moon, a dial indicating the seconds, and a larger half circle marking the days of the month. The chimes were made by a Cincinnati firm; the manufacturers of the main works and case are not identifiable. The clock is wound with a key every seven days.

“May this clock prove … to say, ‘Never Forever, Forever, Never,’” Wilcox concluded. “Never to be forgotten and ever to be remembered.”

The good-bye ceremony, however, turned out not to be Collins’ final hurrah. In 1907, city voters selected a new mayor, David Griffiths, and a new council, which promptly named several  Collins supporters to the school board. Collins’ successor in 1905, Edward Anderson, was able to count heads. He declined renomination, and the new board rehired Collins.

Collins served six more years as superintendent. By the end of his tenure in 1913, though, the school board was no longer appointed (the change took place in 1911.)

Collins survived the first elected school board, but a majority of the 1913 board opposed giving him a new contract. A few days after the board election, Collins announced his retirement – permanently, this time.

With a total of 23 years in the office, Collins remains Springfield’s longest-serving school superintendent.

Collins’ second wife, Mabel, donated the clock to the library in 1936, four years after her husband’s death. It stood on the stairway landing in the old Carnegie library until the building was torn down in 1974.

Following a much needed cleaning and repair, paid for from proceeds of the Friends of Lincoln Library’s first annual book sale, the clock was moved into the new building in February 1977.  It now is in a niche on the library’s first floor, near the south side exit.