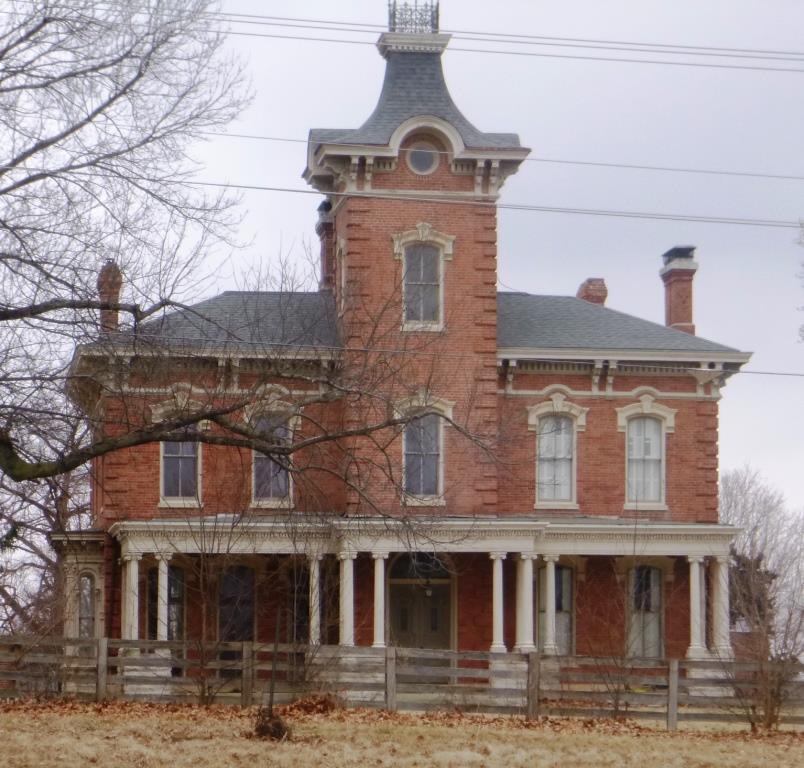 Ben Franklin Caldwell (1848-1924) was a member of Congress and the Illinois legislature in the late 19th and early 20th centuries. He also was a farmer, banker and civic leader whose donations helped build schools in both Chatham and Thayer. He probably is best known today, however, for the Caldwell Mansion, a lavish residence he had constructed north of Chatham in 1876.

Caldwell’s parents moved from Greene County to Sangamon County when the future congressman was 5 years old. Caldwell, only 15 when his father died, quit school to take over the family farm and went on to expand it from 200 to 1,000 acres. 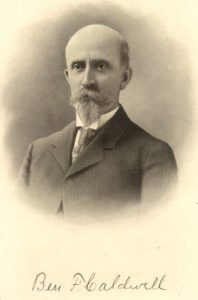 He also became a merchant in Chatham and, in 1879, organized what became the Caldwell State Bank. One of the bank’s buildings, known as the Caldwell Building, still stands at Main and Mulberry streets, just north of the Chatham square. It is thought to be the village’s oldest commercial building, although the front (facing the square) has been drastically remodeled.

The Caldwell State Bank continued operations through at least the early 1930s, but apparently succumbed to the Great Depression. Its last assets were auctioned off in 1944.

Ben Caldwell, a Democrat, was elected to the Sangamon County Board of Supervisors and then to the Illinois House (1882) and Senate (1890). Meanwhile, he also served as president of the Farmers State Bank in Springfield, a post he resigned when he was elected to Congress in 1898. He was re-elected in 1900 and 1902, lost to Republican Zeno Rives in 1904, and then came back to beat Rives in 1904. Caldwell unsuccessfully sought the Democratic nomination for governor in 1912.

Shortly before he died in 1924, the Illinois State Journal, which supported the Republican Party, said of Caldwell:

Mr. Caldwell has been for many years one of the principal figures in Democratic state and count politics, but is best known as a farmer and capitalist. His country home, north of the village of Chatham, is one of the most beautiful and pretentious rural dwellings in the county.

Ben Caldwell paid the entire $11,000 cost of constructing Caldwell School in Chatham as a memorial to his parents. He also contributed substantially to erect the first school building in Thayer. Both schools, however, had an unfortunate propensity to catch fire.

Chatham’s original Caldwell School was a two-story brick structure on the southwest corner of what now is Main and Walnut streets. It contained separate rooms for primary, intermediate, grammar and high school classes. The dedication on Jan. 4, 1896, was covered by the Illinois State Journal.

For a long time the village has needed a public school, the building formerly occupied for that purpose being inadequate to the needs. No one knew this better than Hon. B.F. Caldwell, and the thought occurred to him that he would erect a school house that would be a credit to the village, and he did so, and the building stands there today as a fitting monument to his generosity, a munificent gift to the people of Chatham, and a fitting tribute to the memory of his worthy father and saintly mother.

The building burned down for the first time early on Sunday, March 3, 1901. The cause was not determined, the Illinois State Register said.

It is hard to believe the fire was of incendiary origin, even if some residents have severely criticised the building of the school house, claiming that the installation of so large a building had increased the school tax enormously. The general belief is that some tramp had gained an entrance to the basement and had been smoking there. Some spark may have fallen and failed to kindle a blaze until he had gone.

Chatham residents approved a $5,000 bond issue, which, with insurance proceeds, was enough to immediately rebuild the school. But fire struck the building a second time on April 24, 1904 – again on a Sunday, so the school was vacant.

“Only the gaunt walls of the fine new building are left standing,” the Register reported, “and a smouldering mass of ruins marks the spot where the school stood.” 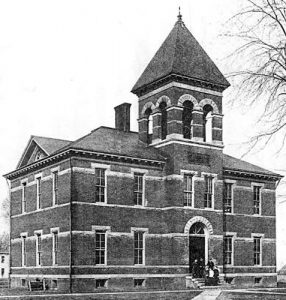 The school was rebuilt again, along the same lines. High school classes continued to be held at Caldwell until 1938, when Chatham High School opened.

Caldwell School underwent few changes over the years – when the Ball-Chatham School Board sought approval of a bond sale in 1951, a flier gave a description that might have fitted the school decades earlier:

The third (school), Caldwell, built in 1904, has two septic tank toilets located on the first floor, to accommodate 155 children and five staff members. It has a wooden stairway from first to second floor so situated that a draft is created by the front door which could shoot flames rapidly through the center of the building. It has two metal, outdoor fire-escapes, one encased, and one unencased with exits in two second floor classrooms.

Caldwell’s last year of use as a school was 1954-55, according to records at the Chatham Area Library District.

The building was empty in March 1964, when it burnt to the ground again. This time, the rubble was cleared, and the lot was auctioned off three months later. Today, the former Caldwell School property is the site of two small commercial complexes.

The “beautiful and pretentious” home mentioned by the Journal in 1924 remains a landmark along Illinois 4 between Chatham and Springfield. 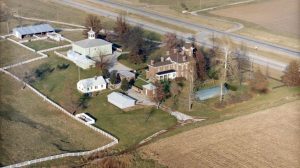 Ben Caldwell had the 6,000-square-foot mansion constructed in the mid-1870s by prominent Springfield contractor E.F. Gehlman. Julie Cellini described the home in a State Journal-Register article in 1983, when it was the site of a decorator’s showcase and tours.

The Caldwell mansion is framed by farmland like a diamond on a piece of jeweler’s cloth. Motorists passing it on Illinois 4 … invariably slow down to marvel at the stately Italian villa, faceted with moldings and brackets and crowned with a cupola.

Built in 1876 by Ben F. Caldwell, an area banker and U.S. congressman, the 12 rooms on 10½ acres accommodated three generations of Caldwells.

When the house was built (reputedly for $20,000), a history of Sangamon County boasted, “Few homes, even in larger cities, are so well or conveniently constructed or elegantly furnished.” It had everything – gas lights, central steam heat, even a pressurized water system.

After the Caldwells, the mansion’s best-known owner was Payne Thomas, who owned Charles C. Thomas Publishing, a medical publishing firm that was headquartered in what is now the Dana-Thomas State Historic Site in Springfield. The Caldwell Mansion was named to the National Register of Historic Places in 1984.

As of early 2017, the house was being readied to become a bed-and-breakfast inn; an entertainment venue was planned for an associated barn. The property took in a total of 8.4 acres.